Seme and Uke? Make Me Puke

Inveterate slash slut that I am, I was delighted when I discovered that all that yaoi from Japan that I'd merely heard of was finally getting translated and would make its way to the US. At last, somebody had clued into the fact that there was a large, untapped, and very enthusiastic market for books with male/male action.

And then I discovered that I don't like about 80% of it, despite being all about guys with guys.

Because I can't stand the seme (physically larger rampantly masculine manly-man "top") and uke (diminutive helpless y-chromosomed damsel in distress "bottom") dynamic in most stories. Gravitation for example, drives me up the wall and through the roof. Coming out of slashfandom as I do, I want men who are, y'know, men, as opposed to every bad and rage-inducing characteristic "girly" stereotype pasted on to a male character. Being a "catcher" does not inherently make a person a weak, useless, helpless, simpering ninny.

That said, here's a short list of yaoi that has avoids the seme/uke trap. Some of it is burn your face off (BYFO) explicit, and some of it never gets beyond unresolved sexual tension (UST) and passonate kisses, but all of it features good characterization, plots that make sense, nice art, and stories where the men act like men.

Synn is working his way up in the wrestling world when he captures the eye of Renegade, the heavyweight champ. Synn's going to be a star eventually, but Renegade offers to make him one overnight, for a price. Renegade wants Synn in his bed. Ren, a fellow wrestler on the circuit, also has designs on Synn. Synn does eventually submit to Renegade, but only on his own terms, and we see that though in some ways he's really a jerk, Renegade isn't all bad, and that Synn was also doing a bit of playing hard-to-get.

Part of the fun of this things-are-not-as-they-seem story (in addition to a few BYFO scenes) is the dynamic between Renegade and Synn. Renegade likes that Synn stands up to him and calls him on his shit, and Synn is a sharp cookie who never does anything he doesn't choose to do. 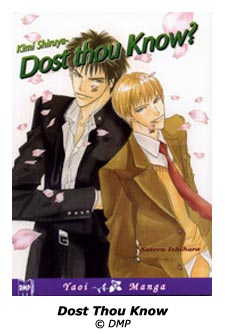 This self-contained volume with story and art by Satoru Ishihara introduces us to Tsurugi and Katsuomi, two fiercely competitive teen-aged kendo champions who have faced each other for years in competitions. Only lately, their intense (yet respectful) rivalry is changing because the two of them have started to fall in love with each other. And that only makes their complicated lives (they come from different social classes, plus each mentors the other's little brother) even more complex as they struggle with finding a way to balance their love for each other with the need to excel in kendo. Though Dost Thou Know? never gets more explicit than a few kisses, oh, what kisses they are! Gerard & Jacques (Blu)

I love stories that derive their UST from differences in class and standing, and a lot of the tensions in this two volume series set in revolutionary era France come from the master-servant relationship between Gerard (a very jaded man of means with a tragedy in his past) and Jacques (an idealistic and somewhat na�ve youth), whom Gerard has rescued and given a place to in his household.

Jacques is a very proud young man, and though he does not want to admit it, he has started to have real feelings for Gerard, to whom he owes everything.

And Gerard knows that Jacques is good for him, that his snarky manservant is worth the wait and is a balm to his wounded heart.

Part historical drama, part duel of wits (Jacques and Gerard are both masters of snark and innuendo), Gerard & Jacques has several scenes of sexcapades from Gerard's past as well as his and Jacques' present that are hot like fire. 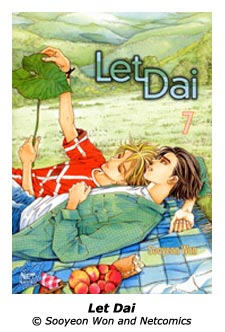 This ongoing (up to volume 11) series by Sooyeon Won centers on the intense relationship between two teen-aged boys in modern day Korea, Jaehee and Dai.

Jaehee is a nice boy who is being raised by his loving mother following the tragic death of his father several years ago. Jaehee's mother actually works herself sick to provide a good home for her son who loves her deeply and is devoted to her.

Dai, on the other hand, comes from a very wealthy household (his father is a prominent and powerful politician) where everybody is manipulative and the only source of unconditional love he has ever known, his grandmother, is slowly going senile and fading away before his eyes. Dai seethes with rage and has taken the lessons learned at home about backstabbing and one-upsmanship and become a street thug, leading a vicious gang.

The two of them cross paths when Jaehee stands up to Dai and his gang when they try to rob Yooneun, the older sister of Jaehee's sort-of-girlfriend, Eunhyung. (Jaehee is secretly in love with Yooneun.) Dai's interest is piqued by Jaehee's pretty face and his courage, and he becomes obsessed with Jaehee. Dai even exacts a brutal (and jealous) revenge of sorts against Eunhyung, who has very strong feelings for Jaehee.

This puts Jaehee in a very awkward position, because despite the fact that he knows Dai is bad news, Jaehee has begun to fall in love with him. Jaehee sees the hurt that drives Dai to such terrifying and brutal acts, and as much as that repels him, he is also drawn to the tender and beautiful parts of Dai's soul. (Dai shares with Jaehee things he would not or could not tell even his beloved grandmother.) Jaehee wants Dai to become the sort of person he would be, if he hadn't grown up in such an awful and unloving house. He doesn't know how to do this, but he cannot bring himself to truly break it off of with Dai, no matter what Dai does.

At the same time, Jaehee wants to be loyal to Yooneun and Eunhyung, who are furious and hurt by his relationship with Dai.

Also, this relationship isn't easy for Dai, who has never been in love before, and though it's never explicitly stated, he's frightened by what he's feeling. Given how feral Dai is, the ways in which he acts out are very intense and not always pretty.

As of volume 11, the series hasn't gotten beyond Dai and Jaehee kissing and cuddling, but given the emotional intensity wrapped up in their relationship and what would happen if they were caught (like being disowned and getting beat downs), those kisses are intense indeed. Desire (DMP)

For those in the mood for a self-contained and more explicit story of confused and screwed up teenagers falling in love for the first time and not knowing up from down, Maki Kazumi and Yukine Honami's Desire fits the bill.

Quiet and shy Toru has been in (unrequited) love with his best friend, the brash and popular Ryoji for some time, only Toru hasn't said anything about it because he fears rejection. And then, without warning, Ryoji makes an overture to him and proposes that they sleep together ... but not because he's in love with Toru, but because being with girls has made him curious what it's like with a guy, and he wants to scratch his itches and get it out of his system and Toru's the guy he trusts not to go blabbing about it.

Toru feels incredibly torn by this. On the one hand, he wants to have sex with Ryoji, but on the other, he wants it to be because Ryoji loves him. But Toru goes to Ryoji's house and a BYFO encounter between them ensues when Ryoji presses the matter. Toru's more miserable than ever, but he can't say no when Ryoji asks. (And Ryoji asks more than once.)

Only, not all is as it seems � by story's end, we discover that Ryoji's been wrestling with his sexuality and is just as confused and unsure of himself and his feelings as Toru is.

This isn't a comfortable story to read, although it does have a happy ending. I found parts of it reminded me of things that I, or friends of mine, went through in high school, so not only is it a favorite of mine because it's got several things I like to see in a story, but it also works as damn good story about being a teenager and discovering the complexities of life and relationships. 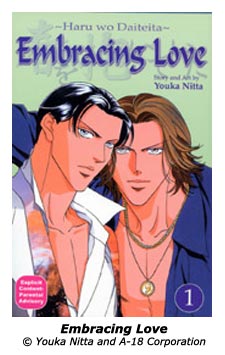 Iwaki is reserved, stubborn, and proud, and though he topped Katou in their first encounter, he subsequently discovers that he prefers bottoming. Not a particularly easy thing for him to deal with, because prior to meeting Katou, Iwaki had thought of himself as straight. In addition to falling in love for the first time (with a man!) and dealing with all the questions that raises within himself about his sexuality and masculinity, Iwaki must also deal with his family's disapproval of his entire lifestyle.

By contrast, the younger Katou is much more comfortable with himself, his sexuality, his ambitions, and the media spotlight he and Katou find themselves in. He's also much more outgoing and Iwaki's reserved and quiet nature often leads him to misunderstand what motivates his lover.

Stong willed, driven, career men with very different personalities dealing with love in the midst of all the complications that come with stardom means that Embracing Love has plenty of lover's quarrels ... and plenty of BYFO make-up-sex scenes. Passion (DMP)

This series (currently on vol. 4) taps into one of the biggest (and kinkiest) power differential relationships: that of teacher and student.

Creators Shinobu Gotoh and Shoki Takaku start the series in flagrante delicto. Unable to contain himself any longer, Hikaru more or less pounces Mr. Shima, the teacher he's been in love with for quite some time. Mr. Shima, for his part, doesn't really object to having been pounced like this. In fact, he's more upset about the forwardness and rudeness of being jumped so abruptly by an unskilled lover. He proposes an unusual penance for Hikaru � they'll pretend to be secret lovers for the remainder of the school year until Hikaru's graduation.

Yes, it's a really preposterous premise, but the characterization makes it work. And by vol. 3, Hikaru's graduated, so now he and Mr. Shima are in the awkward position of trying to keep their relationship discreet, because they (for obvious reasons) don't want anybody to figure out that the affair began while Hikaru was still a student.

What makes this series so spicy is that it deliberately calls up all the clich�s of the seme/uke relationship and turns them upside down. Hikaru, the student, may be bigger, stronger, and topping the slightly built Mr. Shima, but Hikaru always addresses his lover as Sir or Mr Shima, and it's Shima who calls the shots in the relationship.

Yaoi is more diverse than superman semes and helpless wimpy ukes. This list but scratches the surface of the books I could have recommended now that so much yaoi is available at your preferred local comic shop, bookstore, or online vendor. A little digging will reveal something to suit anybody's tastes � happy hunting!