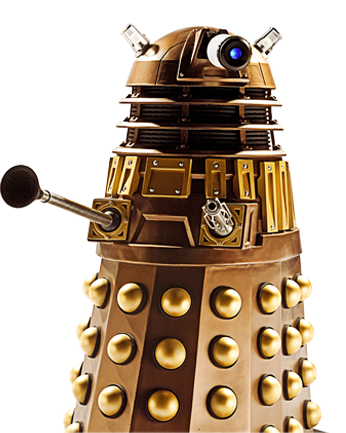 The Doctor is an alien time traveller exiled from his world, Gallifrey. His craft, the TARDIS, is disguised as a British police telephone box of the 1960's. It should change its appearance to blend in with its surroundings but its Chameleon Circuit is broken. It is trans-dimensional (bigger on the inside than out). It travels by disappearing from one location and appearing at another after a passage through another dimension.

The Doctor is a Time Lord. When a Time Lord dies his body regenerates into a new form and the Doctor displays a new appearance and personality. The TV series has featured seven Doctors, each played by a different actor.

A one-off film was made in 1996 that featured the eighth Doctor. A new TV series begins in 2005 with the ninth Doctor.

For each Doctor there is a listing of all the televised episodes with details of The Companions, foes, and other trivia.

During the 1960s and 1970 many Dr Who episodes were destroyed by the BBC. Some have since been recovered from other countries. At present, 109 episodes are missing.

It is set in the future when interstellar travel is commonplace. The United Star Ship (USS) Enterprise is on a five year mission to explore space and make contact with new life forms. The crew are a mixture consisting mainly of people from Earth as well as other planets. Politically, the future Earth is part of the United Federation of Planets. Interstellar travel is accomplished by the use of warp drive which sends the ship at faster than light speed. The ship never lands on planets. It goes into orbit and crew members beam down to the surface using a transporter. The weapons are called phasers and the recording instruments are called tricorders.

A USA series with British subtlity and a super hero with the angst of a Marvel Comics character.

This is a world of vampires, demons and magic. Buffy Summers is the Vampire Slayer, a girl called to the task and who has great strength, fighting skills and powers of recovery. Rupert Giles is her Watcher, who guides her through the battles with the monsters. She lives in Sunnydale, a USA city in California that is the centre of the hell mouth and hence the source of many creatures of evil.

With a group of school friends Buffy fights the forces of evil that appear just about anywhere even at school which leads to breaking furniture plus making a major mess all this while still having to worry about growing up.

Star Trek, The Next Generation
Angel

Buffy The Vampire Slayer
The BBC site with episode guides and more.

Blake's 7
Loads of information about the 1970s British Sci-Fi series.