Sponsored Link
To place a link here contact the webmaster. 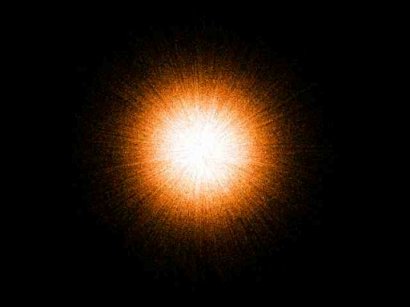 How atoms and molecules react together chemically

Atoms and Molecules, Elements and Compounds

There are about a hundred different types of atoms in the Universe. Substances made up of a single type of atom are called Elements.

Some elements are made up of single atoms:

He, Fe, and Na are the Chemical Symbols of the elements.

Some elements are made up of groups of atoms:

These groups of atoms are called molecules.

Molecules can also be made up of combinations of different types of atoms. These substances are called compounds:

Chemical reactions occur when different atoms and molecules combine together and spit apart.

For example, if Carbon (C) is burnt in Oxygen (O2) to form Carbon Dioxide, a Chemical Reaction occurs. This reaction can be written:

There is one very important rule with chemical equations:

The number of individual atoms on each side of the equation must be the same.

On the left had side, there is an atom of Carbon and a molecule of Oxygen (containing two atoms). On the right hand side there is a molecule of carbon dioxide (containing one atom of carbon and two atoms of Oxygen). The number of atoms on the left hand side is equal to the number of atoms on the right hand side. All that has changed is the arrangement of the atoms. In a chemical reaction atoms are re-arranged; no atoms are destroyed or created.

In the next example, Hydrogen gas is mixed with Oxygen gas. If the mixture is sparked, it explodes to form water. This chemical reaction can be expressed as:

It is not possible to change the chemical formulas of the reactants or products. Water will always be H2O. Balancing the equation is achieved by changing the number of molecules involved. The balanced form of the above equation is:

This reaction gives out a lot of heat when it goes from left to right. It is said to be Exothermic (from two Greek words meaning out and heat). Because of the Law of the Conservation of Energy, if the reaction was made to go from right to left, energy would have to be added. Reactions that require energy are called Endothermic.

The following reaction is between Sulphuric Acid (H2SO4) and Sodium Hydroxide (NaOH) to give Sodium Sulphate (Na2SO4) and water (H20):

This equation is balanced. Counting the individual atoms on both sides gives four atoms of Hydrogen, two of Sodium, one of Sulphur and six Oxygen. This is achieved because one molecule of Sulphuric Acid reacts with two molecules of Sodium Hydroxide.

The final reaction is between Nitrogen (N2) and Hydrogen (H2) to give Ammonia (NH3):

The equation is balanced since there are 2 Nitrogen atoms and 6 Hydrogen atoms on both sides.

It is possible to push the reaction in one direction by adding a Catalyst. A catalyst is a substance that helps a reaction without being used up.

If Ammonia is removed from the equilibrium mixture, the reaction will move to produce more Ammonia so that equilibrium is attained.

Chemical equations tell us how many atoms or molecules react with each other. What is more interesting is how much of a substance is needed to react properly with another.

To answer these types of questions we must use a quantity called Relative Atomic Mass (RAM). In simple terms, this tells us how heavy different atoms are. In actual fact, it tells us their relative masses.

The table below lists Relative Atomic Masses for selected elements.

This table tells us that a Carbon atom is about 12 times heavier than a Hydrogen atom while an Oxygen atom is 16 times as heavy.

Using the table we can put figures to the chemical equations.

As an example, how many grams of Oxygen (O) will be used if 12g of Carbon (C) are burnt to form Carbon Dioxide (CO2)?

Remember the chemical reaction is written:

From the table above we can see that Carbon has a relative atomic mass of 12 while the Oxygen molecule has a relative molecular mass of 32. Since a single atom of Carbon reacts with a single molecule of Oxygen, 12g of Carbon will react with 32g of Oxygen.

If the question had been how much Oxygen does 1g of Carbon require to burn completely to Carbon Dioxide, the figures can be divided by 12:

Dividing by all figures by 12 gives:

For the formation of water from Hydrogen and Oxygen we have

Any chemical reaction (as long as the equation is balanced) can be analysed in this way.

Books From Amazon.co.uk and Amazon.com