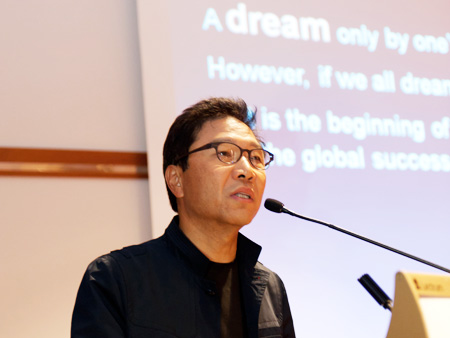 Lee Soo-man, the founder of SM entertainment, gives a speech on “CT (culture technology) and hallyu” during the “2011 SM TOWN in Paris” writers and publishers conference at the Paris Marriott Rive Gauche Hotel, Saturday.
/ Yonhap
By Chung Min-uck

Lee Soo-man, the founder of SM Entertainment, the nation’s largest talent agency, said that the secret of success for Korean artists in the global market is the long-accumulated culture technology (CT), during the “2011 SM TOWN in Paris.”

Addressing the attendees of the writers and publishers conference at the Paris Marriott Rive Gauche Hotel, June 11, he introduced
the theory of CT which was a concept he created in the mid-90s in order to break into other Asian markets.

“I knew back in the 90s that CT would play a bigger role than IT (Information Technology). CT is a much more sophisticated and complicated solution. SM makes music through theoretical and systematic CT. The whole process of making the trainees into a ‘jewel’ is CT,” said Lee.

At present SM selects many would-be pop stars through global auditions. After screening applicants the company operates the simulation of how the voice and the appearance of the trainees would change in three to seven years. Then they go through the company’s nurturing system called “In-house training.”

According to Lee, CT contains all kind of aspects of making a star from making the music to putting on make-up. The key point is that the entire process is done systematically.

He also introduced the three-stage development of Hallyu, also known as the Korean wave, based on his CT theory.

He said that the first step of the development is to export a cultural product, second step is to expand its presence in the market there through teaming up with local entertainment companies and singers, and finally to create a joint venture with local companies to share with them the know-how of CT and the added value generated from it.

“‘Made by’ is more important than ‘Made in.’ The third step of Hallyu stars could be an artist of Chinese decent but would be produced by SM’s CT,” said Lee.

Concerning the Korean wave spanning Asia and SM’s recent successful debut in France, the application of Lee’s unique theory into developing artists proved to be successful. According to a revenue audit report announced by the Financial Supervisory Service at the beginning of this year, local entertainment agencies like SM, YG and JYP Entertainment enjoyed great cash rewards. All three companies reported record revenue of a combined 150 billion won ($138 million) last year.

However, until recently the companies had been struggling to extend their success beyond the Asian market. As an example, JYP’s U.S. subsidiary, represented by Wonder Girls who entered the Billboard Top-100 rankings with their U.S. debut song in 2009, reported a loss of 3.6 billion won last year, following a 4 billon won loss in 2009.

Song Seung-hwan, producer of the Korean cultural export Nanta, made clear the struggle of Hallyu in western markets was from a lack in the quality of their music, during an interview with The Korea Times.

More articles by this reporter