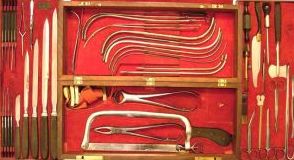 
Laudable Pus and Hospital Gangrene This is a term first introduced to me by Dr Paul Stanton MD (then chairman of Surgery at East TN State Univ) during my surgery residency.It's an antiquated medical term that refers to a time in medicine when puralent supparation(wound infection, pus) was considered a normal part of wound healing and a stage in healing most patients must pass thru to final healing of a wound or amputation incision. We now know and recognize four general stages of wound healing and puralent drainage/infection is definately not one of them. Claudius Galen(circa A.D. 130-200) believed the formation of pus was a critical and essential part of wound healing. His fame as a prolific writer on the science of medicine and the proliferation of medical texts originating from the Golden Age of Greece would provide guidelines for medical practice for 2000 years.

That surgeons welcomed the sight of a purulent wound may be explained by the environment in which they were forced to practice. Wounds could be classified into two different categories: those with suppuration and those without. Wounds productive of a creamy, yellow ooze tended to run a chronic course, taking months to heal, but the patients were generally free of systemic symptoms. It was noted by Steven Smith as late as 1887 that "amputation wounds rarely, if ever, recovered at Bellevue, except after long-continued suppuration." Conversely, a thin, watery discharge was associated with a fatal outcome, with the patient dying of sepsis within days. With an infection rate of almost 100%, a purulent wound represented the lesser of the two evils. Therefore, it is of little wonder that even the most conscientious surgeons preferred and even encouraged the formation of pus.[1]

Laudable pus referred to a thick yellow creamy wound discharge and was a localized infection(probably staphlococcus). It was treated with local wound care and various antiseptics. If the infection didnt spread, the wound slowly healed and the infection would ultimately resolve. Hospital Gangrene was an entirely different matter. It is caused by anaerobic bacteria (which thrive in low oxygen levels) classically Clostridium bacteria. The infection typically begins in open wounds which may have a component of dead tissue present. Poor sanitation can allow innoculation as the bacteria are common flora to our GI tract. The organisms produce gas as a byproduct hence the telltail findings of rapidly advancing erythema, watery thin wound discharge, crepitance to the tissues(gas under the skin can be felt and heard on palpation of the wound), fever, rapid pulse, rapid respirations, low blood pressure. The infection can spread with amazing speed. Modern treatment includes high dose penicillin, surgical debridemont of all dead infected tissue(amputation if needed), and hyperbaric oxygen therapy.

Despite these measures, mortality is still high. My first exposure to gas gangrene came as an intern in the emergency room where a middle aged women presented with acute onset of severe back pain. With no history of trauma I first suspected kidney stones. After sending her for CT scan it was hard for me to believe the results. A large mass(colon cancer) had perforated allowing for direct seading of Clostridum bacteria from the colon into the muscles of her back and from there widespread infection thruout her body. Gas was seen in deep tissues of the upper and lower abdomen and back. Air was even seen in the spinal canal and around the brain. Antibiotics etc were given. The infection was too widespread for any surgical debridement and the patient passed away in a few hours. This condition was intensively studied and it's distinction from laudable pus was well recognized by civil war surgeons.

The scans below were taken from my copy of this landmark text.

Dr Middleton Goldsmith was a surgeon in the Union army stationed at Jeffersonville army hospital who focused on the treatment of gas gangrene. He wrote a classic book titled: A Report on Hospital Gangrene 1863 Bradley and Gilbert Louisville. He believed it was caused by miasm or poisonous substances that occured on putrified flesh.In a later passage he did note there could be passage from one patient to another after an experience where a patient was admitted to the ward with hospital gangrene. Although he died quickly, in short order all four other patients on the same ward contracted ganrene and died. Patients on a different ward in adjacent building did not become infected. He attributed it to airborne transmission of poisons. See excerpt from my copy below.

He study many cases of Gangrene both his own and several case reports from other military surgeons. He was convinced that topical and locally injected bromine solutions on infected wounds would improved survival.He also recommends wound debridemont and cleaning with the bromine applications. See below.

Copies of this book were issued to Union Surgeons encourging the use of bromine on these wounds.

Louis Pasteur (1822-1895) vanquished the long-held myth of spontaneous generation and attributed fermentation and meat putrefaction to living microscopic organisms. It was the simplicity and rationality of his experiments that persuaded many of his contemporaries to adopt germ theory.[1]

Joseph Lister (1827-1912; Fig. 1), a professor of surgery at Glasgow, was the first to see the connection between Pasteur's discovery of the fermentation process and the suppuration of wounds. In April 1867 he published his ground-breaking paper on antisepsis, stating that "all the local inflammatory mischief and general febrile disturbance which follow severe injuries are due to the irritating and poisoning influence of decomposing blood or sloughs." Lister began applying carbolic acid to compound fracture wounds. The wound healed without suppuration, amputation was averted, and the mortality rate from amputation plummeted from 45 to 15%.[1]

(1)Miller, Jason T et al; History of Infection Control and its Contributions to the Development and Sucess of Brain Tumor Operations.Neurosurgical Focus 5/95

We are currently purchasing Civil War Medical items.
Contact us at [email protected] if you have items you would like to sell.

No portion of this website may be copied, retransmitted, reposted, duplicated or otherwise used without the express written approval of the author.