This season there are four teams from the same country in the Champions League quarter-finals for the first time ever.

While Italy, Germany, Spain and Turkey have to make do with one side each, the Premier League's big four have all made it through.

The progress of Liverpool, Arsenal, Manchester United and Chelsea has shown the strength of the Premier League - and with two of them drawn together, England is guaranteed at least one semi-finalist.

Never before has one country dominated to such an extent, so why and how has it happened? And will it continue?

If so, what does it mean for other leagues around Europe, as the best players head for the Premier League in large numbers every summer?

And could the future of the Champions League be under threat if this trend continues?

BBC Sport asked three men with a vast amount of experience and knowledge of European football to give their verdicts:

Marcel Desailly, who won the Champions League twice with Marseille and with AC Milan and also has experience of the Premier League after spending six years at Chelsea

Jesper Blomqvist, who also has a Champions League winners' medal from his time at Manchester United. The Swede also played in Italy with AC Milan

Ferran Soriano, the vice-president of Spanish giants Barcelona, who won the Champions League in 2006.

WHY ARE PREMIER LEAGUE CLUBS DOMINATING IN EUROPE?

Blomqvist: The top clubs in the Premier League have found an excellent mix of the English mentality - the attitude, energy and high-tempo game - with the superior technical skills of the foreign players, and the tactical knowledge of the foreign coaches.

Those elements are giving the Premier League the edge. 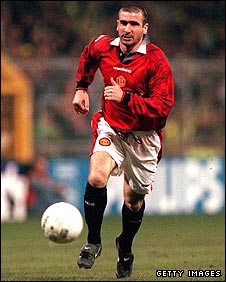 Frenchman Cantona ruled in England through the 1990s

Desailly: When the likes of Gianfranco Zola and Eric Cantona came to England in the 1990s the clubs took a more serious tactical approach and they are now able to play at the European level.

Also, you have four major teams who have the capacity to qualify for the Champions League.

Soriano: These things happen from time to time. Five or six years ago the Spanish teams dominated the Champions League.

However, since there is a strong correlation between the amount of money spent on players' salaries and results, it is fair to say that the Premier League (the biggest league in Europe in terms of revenues - double the size of Spain, France, Italy or Germany) is bound to have more teams winning in the competition.

SO IS IT ALL TO DO WITH MONEY?

Desailly: Money does play a part. But remember there is also money at Inter Milan, AC Milan, Real Madrid and Barcelona - they have that capacity at any time to splash any kind of amount on salaries.

However, you can see the huge potential and interest of foreign owners who want to establish themselves in England with football clubs. In Italy it is different, you cannot buy AC Milan or many of the other clubs because they are not on the market. But the fact that they are available in England motivates these people. 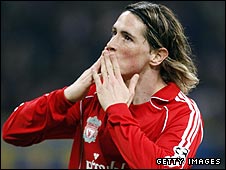 Spain striker Torres joined Liverpool for in excess of £20m

Blomqvist: The Premier League is offering really good money at the moment, and the other leagues are perhaps struggling to match that - particularly in Italy, where the top sides are struggling to hang on to the best Italian players.

So, the really good players are going to play in England right now. Money is a big factor, but it is not the whole reason for the Premier League's domination.

Soriano: Not entirely. The difference in revenues between the Premier League and other leagues has been like this for years.

But the fact that now there are more foreigners playing in England makes the style of play a bit more European and makes the English teams more competitive in the Champions League.

Blomqvist: Yes, I think that the resources that the Premier League has at the moment means that more foreign players will be heading for England.

Soriano: I believe that foreign players will continue to move to England. The Premier League will continue its global projection, attract more revenue and therefore be able to spend more money on players.

HOW WILL THAT AFFECT THE ENGLAND TEAM?

Blomqvist: It is a big problem for the England team. There are not enough good players coming through, and when you look at the top clubs there are not many Englishmen playing in the first team.

To alter things would require a complete change of philosophy and big changes throughout all levels in England.

Soriano: I am not sure much can be done about the England team - they may just have to live with it.

IS ENGLAND'S DOMINANCE BAD FOR THE CHAMPIONS LEAGUE?

Soriano: No, you must have free competition, in a free market. As for the format of the Champions League, the only improvement that can be made is to go back to the old two group stages format.

Blomqvist: The best teams that are left in the competition are there on merit and that is how it should be. I don't believe one country will dominate completely, anyway.

606: DEBATE Who do you think will reach the semi-finals?

But if it did happen, then I think it would be devastating for the competition, not only in a football sense, but other factors like the TV rights would be affected.

Desailly: English clubs will not dominate. You have to consider Barcelona, Real Madrid, Inter Milan, Juventus and many other teams.

Yes, England are doing well but when you look at the likes of these teams and the quantity of trophies they have won, you see their history of winning European titles.

IS THE PREMIER LEAGUE THE BEST IN THE WORLD?

Desailly: In terms of the level of interest and supporters, we can say yes, the English league is the best. It can be more interesting, is quicker, and has more players who want to play and show they are the best. 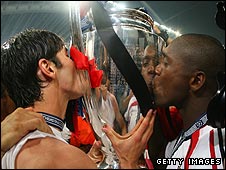 Italy's AC Milan won the Champions League last season However, if you talk with the Italians they would tell you that Serie A is the best league. The only difference is that the Premier League has a global following. I think that, tactically, the gap is not so big between England, Spain and Italy.

Blomqvist: I think Spain is as strong as it has ever been but possibly Italy may be suffering a bit economically and struggling to keep its best players. Perhaps not at the very top, but I feel Serie A is weaker and has gone backwards a bit.

In the Premier League, the combination of the English way of playing with the more tactical parts and technical parts from Europe and South America makes it very, very strong.

Soriano: I would say that the Premier League has certainly been the best-managed league in the last 10 years.

related bbc links: Football on the BBC Your say - 606

related internet links: Premier League Uefa The BBC is not responsible for the content of external internet sites

Copyright © 2020 BBC. The BBC is not responsible for the content of external sites. Read more.