You are in: UK: Politics

The "softly, softly" trial in Lambeth was simply "handing over drugs policy to criminals on the street", he claimed.

We are saying to the home secretary: 'Stop and think again, because this is not the way to go about it'

On Wednesday, Home Secretary David Blunkett is expected to announce the downgrading of penalties for possession and dealing of cannabis.

Under the Lambeth experiment - introduced a year ago by former Lambeth police commander Brian Paddick - those found carrying small amounts of cannabis are given a warning by police, rather than prosecuted.

Mr Duncan Smith said his reason for taking a closer look at the drugs experiment was that he believed Mr Blunkett planned to roll it out nationwide.

The Tory leader, who was heckled during his visit, stressed that it was important for politicians to meet the locals before making decisions on policy. 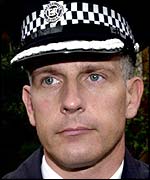 Brian Paddick says the scheme is a success
"It is clear from what they were saying to me there... that there is a deep concern that this experiment is actually damaging the young in this area and also many other family sectors as well.

"It is quite wrong, surely, to hand over your drugs policy to criminals on the street, who know the dealers?

"What the dealers are doing is creating new dealers from the young in this community and bringing others in as well - that's our main concern."

Mr Duncan Smith insisted: "We are saying to the home secretary: Stop and think again, because this is not the way to go about it."

The Lambeth scheme was launched to give police more time to combat hard drugs.

However, the Tories say there has been a significant increase overall in drug trafficking in Lambeth and drug dealers are in control, not the police.

Kate Hoey, one of the local Labour MPs, has also condemned the experiment, saying it has made drug trafficking socially acceptable.

Last week Mr Paddick defended the scheme saying there was no evidence to show his relaxed approach had attracted an influx of "drugs tourists" to Brixton.

The policy of issuing police warnings might be extended to other parts of the country, if as seems likely, Mr Blunkett announces on Wednesday that the penalties for cannabis are to be downgraded.

He told MPs last October there was a case for reclassification: for reducing the maximum penalty for possession of cannabis from five years to two years and for trafficking from 14 years to five years.

But Mr Duncan Smith argued that the Metropolitan Police was "deeply concerned about the rise in dealing of hard drugs, as well as soft drugs and the levels of addiction".

"What I hope is the home secretary will come and listen to these people and explain to them why he is thinking of making this go nationwide when we have no evidence of its success here."

As one resident heckled the Tory leader, arguing that the experiment was working, Mr Duncan Smith added: "I don't want children in this community to have their lives damaged, to become drug dealers and move into hard drugs."

"The dealers have no need to hide now. If the government wanted to try to control drugs, they should have done it in a controlled way in the bars or other places that adults frequent, rather than on the streets.

"It makes me feel very frightened."

Rev Jeanette McLaren, priest-in-charge at St Paul's Church, Brixton, said she had been offered drugs twice a week since the new policy began.

"My congregation are very against the more liberal attitude on the streets and the effect it is having on our young people," she said.

But youth activist Hughie Rose, 32, called for Amsterdam-style cannabis cafes to control the spread of the drug.

TALKING POINT Should cannabis be reclassified?