You are in: UK: England 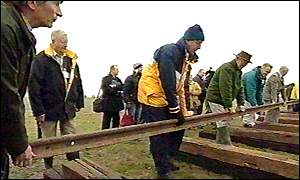 The sleepers will form part of a war prisoners' memorial
Former prisoners of the Japanese on the notorious Thai-Burma railway have once again been carrying timbers from the track which they last grasped 60 years ago.

Up to 50 former PoWs watched the arrival of the sleepers, spikes and track which have been taken to the National Memorial Arboretum at Alrewas, Staffordshire.

There, they will form a permanent memorial to the Allied soldiers, estimated at 16,000, who died at the hands of the Japanese or from disease.

One veteran, Dutch-born Fred Seiker, from Worcester, said the rails were a "living, tangible thing". 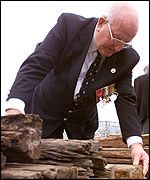 
He said: "It's a great day. It encapsulates all we went through."

The 100ft (30m) section of track from the 260 mile (415km) railway was collected by a Royal Navy frigate in Thailand in November, and unloaded at Plymouth on Monday.

The veterans and their families filed past the track which was dubbed the Railway of Death.

Others though helped carry the fragile, termite-ridden timbers to an area of land lined with saplings to commemorate the dead.

An official dedication ceremony for the track will be held on 15 August.

Retired Major Philip Mains, who served with the Royal Indian Service Corps, said: "It's vital that we should not pass hatred from generation to generation.

"We would hope that when people come here, they will remember the sacrifices and say this will never happen again."

He said: "Future generations must be made to realise that the freedom they now enjoy was won by these people.

"It's also important for the widows and families of those who died to have some object on which they can focus their memories. They have no graves to visit."

Links to more England stories are at the foot of the page.