You are in: UK

Monday, 8 July, 2002, 12:25 GMT 13:25 UK Britain 'sheltering al-Qaeda leader'
A senior al-Qaeda leader is reportedly being looked after by British intelligence at a safe house in northern England - but security sources are denying the claim.

Abu Qatada is accused by the United States, Spain, France and Algeria of being a key influence in the 11 September attacks on the US.

Mr Qatada faces a death sentence in Jordan after being convicted in his absence of funding a bombing campaign, and is said by US and Spanish investigators to be Osama Bin Laden's ambassador in Europe.

He disappeared in mid-December after British authorities confiscated his passport, froze his assets and ordered him confined to his home in Acton, west London.

In April the Sunday Times said Mr Qatada had turned "supergrass" for MI5 - a theory fuelled by the arrests of several Muslim extremists in Germany who had met him.

Now senior European intelligence officials have reportedly told Time Magazine that Mr Qatada and his family are being lodged, fed and clothed by British intelligence services.

"The deal is that Abu Qatada is deprived of contact with extremists in London and Europe but can't be arrested or expelled because no one officially knows where he is," says the source, whose claims were corroborated by French authorities according to the magazine.

"The British win because the last thing they want is a hot potato they can't extradite for fear of al-Qaeda reprisals but whose presence contradicts London's support of the war on terror."

But UK security sources have told BBC News there is "absolutely no substance" in the claim as British intelligence does not know where Abu Qatada is, having lost track of him after he disappeared.

Mr Qatada, a Jordanian-born Palestinian, was granted asylum in Britain in 1994 after claiming he was fleeing persecution for his religious beliefs. 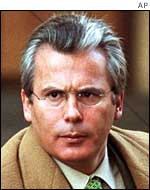 Dahdah, whose real name is Imad Eddin Barakat Yarbas, was one of eight suspected members of a group charged with preparing and carrying out the 11 September attacks.

"I believe in Jihad," he said.

"And I believe in the necessity of liberating our nation and freeing it from bondage."

IN DEPTH The investigation The money trail

Links to more UK stories are at the foot of the page.