You are in: UK 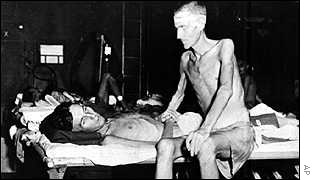 The landscaped garden and replica section of track will form the centrepiece of the Millennium Commission-funded National Memorial Arboretum in Alrewas, near Lichfield, Staffordshire.

It has been created using lengths of line donated by Railtrack, rough-hewn sleepers carved by Forest Enterprise and plaques telling the history of the 125-mile (200-kilometre) railway.

Designed by one of only a handful of British survivors who constructed the line, Jack Plant, it is based on a sketch made by one of his fellow prisoners in Indonesia, Owen Greenwood, in 1944 to 1945.

When we look at it we can still smell the jungle, hear the Japs shouting and feel the heat

Joining former colleagues for a commemoration service at the site, Mr Plant, said: "That sketch is so accurate that when we look at it we can still smell the jungle, hear the Japs shouting and feel the heat."

The 83-year-old, of Great Wyrley, near Cannock, Staffordshire, added: "The construction of the Sumatra railway served no useful purpose.

"On the day it was completed, World War II came to an end.

"The occupying force no longer had a need for the railway.

"The former Dutch colonists expressed no interest, the Indonesians had no use for it, the Allies wanted to get home and within weeks of its completion, the jungles began to consume it.

"In 15 months, around 700 PoWs from Britain, Holland, Australia, America and New Zealand and around 25,000 forced-labour natives - romushas - had perished.

"This memorial is to ensure they are never forgotten."

The Japanese ambassador to Britain, Sadayuki Hayashi, and the Bishop of Coventry, the Rt Rev Colin Bennetts will also unveil a reconciliation stone.

The ceremony is being held on the 56th anniversary of VJ Day - the end of the war in Far East.

The Japanese used about 5,000 Allied prisoners of war and 30,000 forced-labour natives to work on the line, joining Padang in the west to the port of Pakanbaru, on the River Siak.

Diseases including malaria and dysentery were rife due to primitive living conditions and a lack of nutritious food.

PoWs and labourers battled against mosquitoes, leeches, poisonous snakes lizards and the humidity in the dense jungle, swampland and mountainous terrain.

Links to more UK stories are at the foot of the page.