You are in: In Depth: Newsmakers 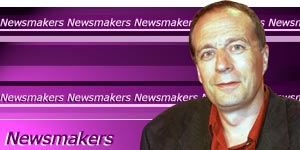 Harvard University's withdrawal of a speaking invitation to the poet Tom Paulin after he allegedly made anti-Israeli comments again throws the spotlight on the outspoken academic and critic.

The fault-lines which define Tom Paulin are there for all to see.

Although to many he is the archetypal Irish writer, he was actually born in England. An Ulster Protestant by tradition, he is an Irish republican by conviction. 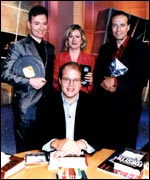 Culture vultures: The Late Review team A fully paid up member of the Awkward Squad and a determined iconoclast, he holds a lectureship at that jewel in the crown of the British Establishment, Oxford University.

Feisty, combative, some would say rebarbative, his appearances on Newsnight Review - and the Late Review which it replaced - have brought him cult status among the chattering classes. He is, as one wag puts it, the thinking man's thinking man.

But Paulin's reputation, resting as much on his status as a media star as on his poetry, has been somewhat tarnished of late.

In an interview with the Egyptian newspaper, Al-Akram, published in April, he allegedly called for US-born Israeli settlers to be killed.

[I do] not support attacks on Israeli citizens under any circumstances

Tom Paulin
And he reportedly also said of the settlers: "They are Nazis, racist. I feel nothing but hatred for them."

Now there are demands from some quarters that Paulin is prosecuted for uttering these views. And it seems that, in part at least, the American academic establishment has decreed him persona non grata.

Paulin's retort, that he was "a lifelong opponent of anti-Semitism" and that he did "not support attacks on Israeli citizens under any circumstances", appear to have fallen on deaf ears.

Thomas Neilson Paulin was born in Leeds in 1949. The son of a Northern Irish mother and an English father, he moved to Belfast as a child and was brought up near the more genteel end of the city's Ormeau Road. 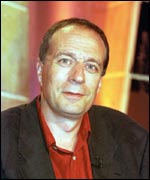 A fearless iconoclast His parents, a headmaster and a doctor, held "vaguely socialist liberal ideas," according to Paulin.

As a child, he was immersed in books - his house having no television - and that singularly Irish love of poetry was soon awakened.

He studied at Hull University during the time that another poet, Philip Larkin, was librarian there, before going on to take a doctorate at Lincoln College, Oxford.

His first academic post was at Nottingham University. He still looks back on this time with great anger.

"There were lecturers saying the literary canon is an oppressive imperialist tool designed to annihilate the British working class," he recently told one interviewer.

"You know, the British working class liberated itself by studying English literature."

But, compensating for the disappointments of his academic career, was his poetry.

As much a child of "the Troubles" as Seamus Heaney, Paulin began to write, in that deceptively direct manner which has become his trademark, of recent Irish history. 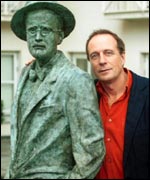 Tom Paulin is in the tradition of James Joyce Here, in an early example of his work, Paulin reflects on rebellion and retribution:

"Night landings on the Antrim coast, the movement of guns now snug in their oiled paper below the floors, a judge shot in his hallway before his daughter, a hemp noose over a greased trap."

Although owing more to the English tradition of TS Eliot than the Irish lyricism of, for instance, WB Yeats, Paulin's works soon attracted critical attention and acclaim.

After more than two decades at Nottingham, he moved back to Oxford, this time as GM young lecturer in English literature at Hertford College.

But his television appearances, most notably on Late Review, have brought Paulin to popular attention.

Together with commentators like Germaine Greer, Allison Pearson and Tony Parsons, his musings on culture both high and low have become a weekly fixture for more than a million viewers.

Paulin's passion often boils over. He called one hapless writer "a little balsawood minor man of letters, who is of no consequence at all". 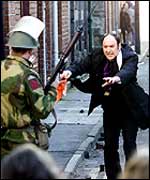 The filming of Bloody Sunday On another occasion, discussing two television dramas concerning deaths of 13 Irish civilians on Bloody Sunday, he went even further.

After dismissing Greer's views as "rubbish", Paulin went on to say that the British paratroopers on duty that day were "thugs sent in by public schoolboys to kill innocent Irish people. They were rotten, racist, bastards."

Paulin's wife is of Sikh extraction, and he wears his anti-racist credentials on his sleeve.

Tom Paulin's passionate rhetoric puts him firmly in the great - and varied - tradition of Irish dissenters, whether they be Jonathan Swift, James Joyce or Ian Paisley.

Now his polemical, knockabout, style has ruffled feathers in the US, where the pro-Israeli lobby is quick to counter any perceived anti-semitic slights.

But even his friends would admit that diplomacy has never been part of Dr Tom Paulin's otherwise wide vocabulary.

The wording of this profile has been altered to clarify its meaning, following a reader's complaint.

Links to more Newsmakers stories are at the foot of the page.