You are in:  Entertainment: Arts 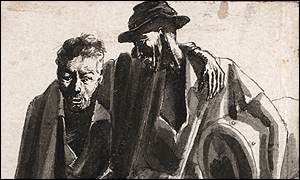 Mr Chalker recorded the horrors of the "railway of death"
Drawings by a World War II veteran depicting horrific scenes from Japanese prisoner of war camps in Burma are to be sold at auction next month.

The collection of more than 100 drawings and paintings by Jack Chalker, 83, goes under the hammer on 16 April at Bonhams auctioneers, in London.

A spokesman for Bonhams said the pictures formed "an immensely important historical archive".

Mr Chalker, from Somerset, was a student at the Royal College of Art in London when he was called up to reinforce the beleaguered Singapore garrison. 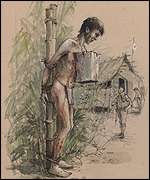 Punishment: The bucket would have been full of stones or water


He was captured, with 137,000 comrades, when the garrison surrendered in 1942, and was sent to the Kanvu river to work on the notorious Burma Railway - the so-called railway of death.

Mr Chalker contracted dysentery and dengue fever six months later, and spent the next two and a half years in Japanese-run hospital camps.

In watercolours, monochrome washes and drawings, he recorded his comrades' suffering.

Drawings Mr Chalker made from his sickbed in a camp hut reserved for victims of dysentery show stick-like figures with protruding ribs lying on the floor in a squalid, unfurnished room.

Another, entitled Two Working Men, Kanvu River Camp, shows similarly emaciated, frail figures, one of them walking with the aid of a makeshift bamboo cane.

Mr Chalker said: "Unhappily, during one of my sessions in the dysentery hut I was hiding some drawings in a section of bamboo when a Korean sentry suddenly appeared."

The sentry "began the expected shouting and hitting, and made me tear the drawings into very small pieces", Mr Chalker said.

"This was only a prelude to the real beating, and the next two days were a nightmare.

"When at last it was all over...I found that two small drawings had escaped detection under some rags."

After the Japanese surrender in 1945, Mr Chalker was attached to Australian HQ in Bangkok, in Thailand, as a war artist, and completed additional work for official war history and medical records.

Links to more Arts stories are at the foot of the page.