You are in: Asia-Pacific

Monday, 8 July, 2002, 13:28 GMT 14:28 UK Inquiry into warship accident
The Royal Navy has launched an inquiry into how the destroyer HMS Nottingham ran into rocks off the coast of Australia.

The ship started taking on water after Sunday's accident, which happened in poor weather near Lord Howe Island, 300 miles north-east of Sydney in the Tasman Sea.

The 3,500-tonne ship is now at anchor while divers assess the damage and water is pumped out with the help of equipment provided by the Australian Defence Force.

A combination of unfortunate circumstances and human error

"It hazarded the lives of 250 men and women. We have done significant damage to a major British warship. This is not a good day for me," he said.

Asked by local television what caused the accident, he said: "A combination of unfortunate circumstances and human error."

Water flooded up to five internal compartments, including sleeping quarters which were under almost seven feet of water at one stage. 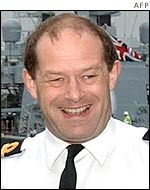 "That team is expected around there later today [Monday]."

A British Ministry of Defence spokesman said the ship had been made stable, and there were no casualties.

"She has taken on water. There is a fair bit of flooding, we are trying to find out just how much there is."

The vessel, with 253 crew on board, was on a routine trip from Cairns, in Queensland, north-east Australia, to Wellington, in New Zealand.

HMS Nottingham Launch in 1980, refitted 2000 125 metres long with 14.3 metre beam Powered by four Rolls-Royce gas turbines Weapons include twin Sea Dart missiles However, he said it was "fruitless" to speculate on the causes until a Royal Navy inquiry had been completed.

Gary Crombie, whose home overlooks the stranded ship, said the area was a hive of activity.

"The rescue operation is well and truly under way," he said.

"A lot of helicopters flying overhead, boats around the ship itself and of course the ship is at anchor in the lee of the island."

He added that the Nottingham was "very heavily down by the bow" with large hoses pumping water out of it.

Mr Crombie said the incident had caught the interest of the island's 300 inhabitants, with most finding themselves a vantage point to watch the rescue operation.

"It is not a common occurrence, that is for sure."

Ben Mitchell, of Australia Search and Rescue, said the situation was a lot better than had been feared when the initial reports came in.

"At that stage the situation was extremely serious and there were concerns the ship may sink," he said. 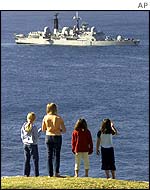 The 300 people living on island are fascinated
"Some consideration was given to beaching the vessel to prevent it sinking. The ship had been holed but the crew managed to stem the inflow of water and they got the situation under control."

Mr Mitchell said the incident had generated a lot of interest.

"We've had a lot of calls about this - it's not every day that a Royal Navy ship runs aground."

Lord Howe Island is a sliver of land just one kilometre wide and 14 km long, surrounded by coral reef.

The BBC's Paul Adams
"A very public embarrassment for the navy"

Aus Maritime Safety Authority's David Grey
"They have anchored... in a protected area"

Gary Crombie's house overlooks the ship
"It's not a common occurrence, that's for sure"

Links to more Asia-Pacific stories are at the foot of the page.