Microorganisms from the Moon. by Brig Klyce

Retracted: Microorganisms from the Moon What'sNEW 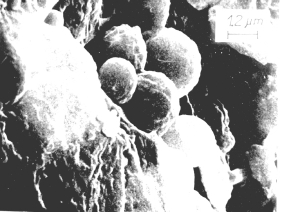 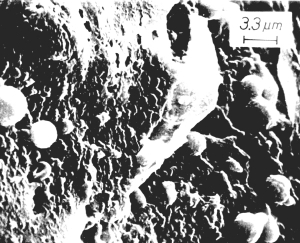 On 24 September 1970, for the first time, an unmanned spacecraft delivered a lunar "soil" sample to Earth. The Soviet Union's Luna 16 spacecraft returned from the moon's Sea of Fertility with 101 grams of lunar regolith in a hermetically sealed container (1). In February 1972, only 120 kilometers from the Luna 16 site, Luna 20 used a drill with a ten-inch, hollow-core bit to collect another regolith sample that was also hermetically sealed on the moon (2). Back in the USSR, the sealed containers from the Luna missions would be promptly delivered to the laboratory for the contents to be examined and photographed. But even after hundreds of the pictures were published in an atlas in 1979 (3), the biological nature of some of the particles was not noticed.

Further study of the photographs was later undertaken by two biologists at the Russian Academy of Sciences, Stanislav I. Zhmur, Institute of the Lithosphere of Marginal Seas, and Lyudmila M. Gerasimenko, Institute of Biology. They noticed that a few of the particles in the photographs were virtually identical to fossils of known biological species. Specifically, some spherical particles from the Luna 20 regolith plainly resemble fossils of modern coccoidal bacteria like Siderococcus or Sulfolobus in their scale, distribution, form, and the distortion of the spheres that occurs during fossilization.

The Luna 16 regolith contained a fossil whose striking morphology was not overlooked by the editors of the 1979 atlas. Because of its concentric circular form with strong spokes, they guessed it was a tiny meteorite crater. But Zhmur and Gerasimenko saw the fossil's unmistakable resemblance to modern spiral filamentous microorganisms like Phormidium frigidum, found in growing stromatolites in Shark Bay, Australia, and to spiral filamentous microorganisms from early Proterozoic shiungites of Karelia. Their new analysis of these particles was announced at an astrobiology conference in Denver, 20-22 July 1999, and published in the conference proceedings in December 1999 (4). 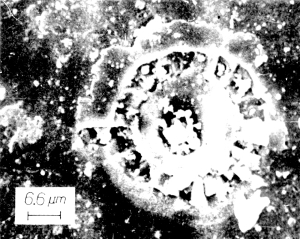 Luna 16: A silicated fossil found in lunar regolith similar to modern spiral filamentous microorganisms such as Phormidium frigidum. View larger image and microscopic impact craters for comparison. At same Denver conference, Zhmur and Gerasimenko had also announced the finding of biological microfossils in several carbonaceous meteorites from far beyond the moon. We considered the fossils in meteorites to be their most newsworthy finding and, on 27 January 2000, we posted pictures from two of the meteorites on this website (5). Although no one has disputed the biological nature of those microfossils, a nullifying consensus subsequently developed. In March, at the Lunar and Planetary Science Conference held in Houston, evidence of contamination was reported in all carbonaceous and Mars meteorites that were examined for it (6). Because germs on the ground and on people's hands can easily colonize meteorites before they are examined, and because fossilization can happen in only days, fossilized microorganisms in meteorites are now widely suspected to be the remains of recent, earthly contaminants.

The microfossils from the moon are different. Each Luna sample was encapsulated on the moon and opened only in a laboratory where examination commenced immediately. These fossils are solid evidence for ancient life elsewhere in space. 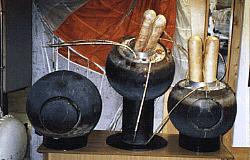 A reply from Kevin Keogh, 28 October 2000, mentions possible challenges to the story.