Correspondence with Michael Behe illuminates some differences between ID and CA. 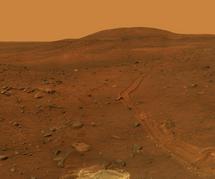 21 June 2013 Mars had an oxygen-rich atmosphere long before Earth did, and the red planet's color comes from iron rusted in the presence of oxygen, according to Oxford University geochemists. Interestingly, Earth also was a red planet for a time, when cyanobacteria began releasing oxygen and the exposed iron rusted here. Perhaps life on Mars created a similar environment but died out (dried out?) soon after.

Life on Mars! and

Thanks for an alert, Stan Franklin.
9 June 2013 It is surprising to have large, potentially complex fossils that far back — Christopher H. House, Penn State University

Life Before 3850 Million Years Ago? is a related local webpage.
8 June 2013 Where is the evidence for new genetic programming by standard darwinian trial-and-error? We have asked this question for a long time. Now a new article purports to give an example. An interdisciplinary team provides temporal and mechanistic detail about how young genes gain essential function. They are aware that gene duplication often leads to the segregation of preexisting functions; the process is called subfunctionalization. But in this example, the essential new function was not present before the studied duplication. Therefore, they write, the inferred process exemplifies neofunctionalization, in which a new function is created. We traced the evolutionary steps by which the Drosophila gene Umbrea acquired an essential role in chromosome segregation in D. melanogaster since the gene's origin less than 15 million years ago. The analysis is deep and noteworthy.

We have studied the analysis. We note that the new function is provided by a protein (PxVxL recognition) whose sequence is well-conserved from its immediate predecessor (Chromodoshadow fold) except for three essential amino acid changes (noted by stars in the figure). Each of these three a–a changes requires only one nucleotide substitution. So possibly only three changed nucleotides, out of at least 180, enabled the new function. This suggests to us that the programming for the new function was not new, but pre-existing. The few mutations needed to enable it would count as tinkering within a narrow range. If the programming was pre-existing, we say the phenomenon is still subfuntionalization.

One could argue that similarly tiny incremental changes could eventually produce all the genetic programming in life. But the many thousands of extant gene families are all separated by far more than three changed nucleotides.

A New Gene Fits in Without a Ripple by Michael Behe, Evolution News and Views, 11 Jun 2013.

New genetic programs in Darwinism and strong panspermia is a related local webpage.

Chandra Wickramasinghe, "Bacterial morphologies supporting cometary panspermia: a reappraisal" [abstract | local PDF], doi:10.1017/S1473550410000157, p25-30 v10, International Journal of Astrobiology, Jan 2011 (online 10 Jun 2010).
28 May 2013 A large fraction of human PSs were already present in the last common ancestor of flies, mollusks, urchins, and mammals. Peptidergic systems (PSs) are essential components of neuronal communication in the animal brain. Phylogenetic analyses now show that many vertebrate and arthropod PSs that were previously thought to be phyla specific are in fact of bilaterian origin. Genes that are present long before they are expressed make a jarring puzzle for standard darwinism, and a neat confirmation for cosmic ancestry.

Metazoan Genes Older Than Metazoa? and

28 May 2013 All gene trees differ from species phylogeny, because genes are transferred horizontally. Two geneticists at Vanderbilt University acknowledge that ubiquitous horizontal gene transfer (HGT) makes it difficult to discern the [vertical] phylogeny of a given species, but such a phylogeny must nonetheless exist. (Sexual reproduction complicates the problem.) Analysing 1,070 groups of orthologues from 23 yeast genomes, Leonidas Salichos and Antonis Rokas (right and left) propose improved methods for tracing vertical phylogeny. They immediately noticed that, with earlier methods, None of the 1,070 gene trees agreed with each other. They suggest, 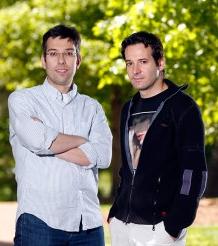 The second critical revision is that we carefully examine the signal present in individual genes and their trees. Our results indicate that the subset of genes with strong phylogenetic signal is more informative than the full set of genes, suggesting that phylogenomic analyses using conditional combination approaches, rather than approaches based on total evidence, may be more powerful.

Finally, it is necessary to identify explicitly internodes that... are poorly supported.... Identifying these internodes and distinguishing them from those that are supported by a considerable fraction of genes and that lack conflicts will be far more beneficial than simply helping to pinpoint challenging internodes.

Horizontal gene transfer does not replace vertical inheritance, but it makes it much harder to ascertain. These two geneticists recognize this challenge and propose ways around it. Very good. But HGT presents another challenge for standard darwinism. In standard darwinism, HGT should be the exception, and genes-from-scratch should be the rule. Instead, HGT looks rampant, and and genes-from-scratch are nowhere to be found. Would this challenge interest Salichos and Rokas? We'll ask.

Untangling the Tree of Life by David Salisbury, Vanderbilt University (and Newswise), 14-15 May 2013, and Astrobiology Magazine, 28 May 2013.

The Tree of Life is a related local webpage. (Glance at What'sNEW there.)

Thanks for an alert, Sascha Wageringel.

Thanks for an alert, Theodore Rigley.
16 May 2013 The enormous scale of the invasion of vertebrate genomes by viral sequences has become apparent through analyses of complete genomes. Sequences derived from many kinds of RNA and DNA viruses have found a convenient resting place in host genomes during evolution, and the process is ongoing. Retroviral genomes, the major and best understood viral insertions, alone account for 6 to 14% of the genomes analyzed to date, including ~8% of human DNA. These endogenous retroviruses (ERVs) comprise more genomic DNA than that encoding the host proteome.

New pieces of the Polonnaruwa meteorite were recovered in Sri Lanka when Chandra Wickramasinghe returned there in April. The pieces recovered in December and January were fluffy material, less dense than water, composed dominantly of one-phase SiO2 — unlike other known meteorites. The newer pieces (example below; picture width = 22cm), recovered by witnesses of the same fall, are denser, multi-phase material with a fusion crust and chondritic inclusions — similar to well-studied carbonaceous chondrites. These lead Chandra to speculate that the impacting bolide had a carbonaceous core surrounded by SiO2-dominated scum that had settled onto it from a cometary lake. Additional analysis is under way. Meanwhile, we are seeking a NanoSIMS facility to conduct isotopic analysis of the fossils already observed in the original fragments. 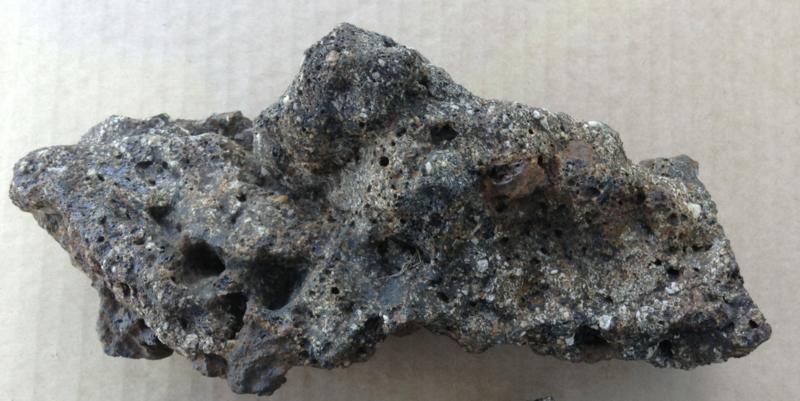 11 May 2013 ...TEs, and in particular ERVs, have contributed hundreds of thousands of novel regulatory elements to the primate lineage.... Taken together, these results demonstrate that TEs, and in particular endogenous retroviruses, have considerably transformed the transcriptional landscape during primate evolution. So write a trio of geneticists working in Canada and Singapore, following a deep statistical analysis of data from the encyclopedia of DNA elements (ENCODE).

The volume of available genomics data has grown exponentially in the past decade. If evolution is strictly darwinian, supporting evidence should by now be seen in these data. Examples should be turning up that show how the genetic programming for an evolutionary innovation was originally, gradually composed, by trial and error, on a blank slate.

Instead, the data show that new genetic programming is acquired in large, already-composed pieces. These may include exons, whole genes, multiple genes, and regulatory sequences like the transposable elements derived from retroviruses seen here. This study even shows that acquired elements powerfully affect evolution among primates.

We think the evidence favors cosmic ancestry. And we welcome pointers to the mentioned missing evidence that would support strict darwinism.

New genetic programs in Darwinism and strong panspermia and

3 May 2013 The origin of...? An article from biologists at the University of Queensland, Australia, is titled , "Origin, evolution and classification of type-3 copper proteins...." The word "origin" in the title suggests that darwinian evolution will be supported — an evolutionary innovation will be shown to have originated from unrelated, preexisting genetic material. In this respect, the article is not unusual.

However, after the "Background" paragraph, the article begins, Here, we combine genomic, phylogenetic and structural analyses to show that the original type-3 copper protein possessed a signal peptide and may have been secreted.... This ancestral type-3 copper protein gene underwent two duplication events.... In other words, an ancient version of the protein is characterized and its subsequent evolution is traced. Its origin is not explained. The biologists even admit, The type-3 copper protein family is ancient, apparently antedating the divergence of the three domains of life. This antiquity, along with diversity of functions observed in extant members, has made it difficult to determine the ancestral function and early evolution of this family.

The research is admirable and includes much that is new about the gene duplications and acquisitions and losses of domains in this gene family. But the word "origin" in the title is misleading. In this respect, the article is not unusual.

Metazoan Genes Older Than Metazoa? and

30 April 2013 ...We should admit that we don't fully understand how evolution works at the molecular level. ...In short, the current picture of how and where evolution operates, and how this shapes genomes, is something of a mess. That should not be a criticism, but rather a vote of confidence in the healthy, dynamic state of molecular and evolutionary biology. Barely a whisper of this vibrant debate reaches the public.

Neo-Darwinism is a related local webpage.
18 April 2013 Earth was seeded by panspermia. This is among several unorthodox conclusions in a wide-ranging online paper by a pair of theoretical biologists in Maryland and Florida. They begin by backward-extrapolating the course of evolution under the dictates of Moore's Law. This rule, introduced in 1965, says that technological complexity doubles at a fairly constant rate. For life, the complexity measure is the size of each species' "functional, non-redundant" genome. And for prokaryotes, the doubling time is in the range of a billion years. Therefore, the biologists observe, ...Life could not have originated on Earth even in the most favorable scenario....

The article deals directly with several issues of interest to us, beginning with origin-of-life theories (introducing another one); treating the origin-of-life and evolution as related problems; and attempting to measure or quantify evolutionary progress. It even discusses the hardiness of bacteria for space travel. Sure, we wish the authors were less committed to the standard big bang theory and had more to say about gene transfer. And, of course, if Moore's Law has major exceptions in biology, the principal argument fails. But we have long believed that life couldn't get going on Earth in the time available. This analysis reaches the same conclusion by a different route. It's a challenging, eye-opening article. Recommended.

Could Life Be Older Than Earth Itself? by Jillian Scharr, Discovery.com (also Yahoo News), 17 Apr 2013.

Genes Older Than Earth? and

What Difference Does It Make? are related local webpages.

Fragments of the Polonnaruwa meteorite - a darkened fusion crust is discernable on the bottom edge of the largest one.

Thanks for sending this image, Chandra Wickramasinghe. 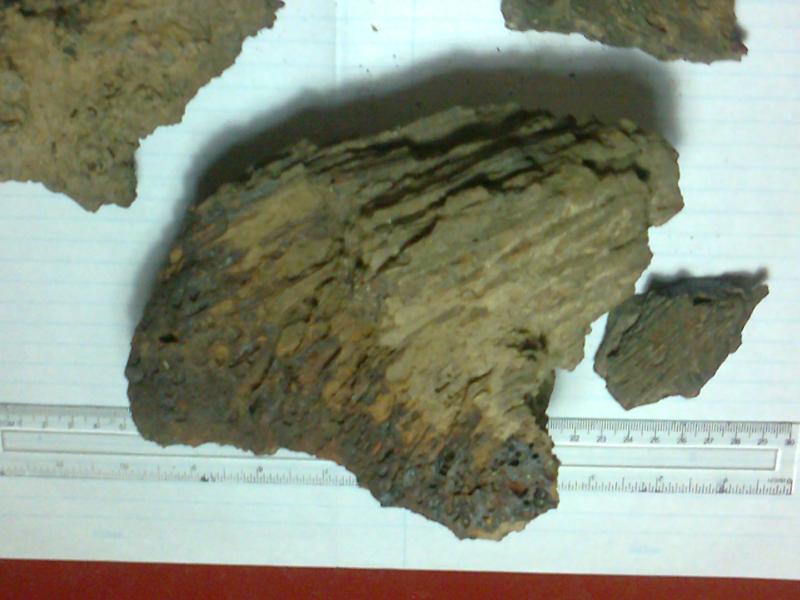