Review: Picasso, Completely Himself in 3 Dimensions - The New York Times

Many exhibitions are good, some are great and a very few are tantamount to works of art in their own right — for their clarity, lyricism and accumulative wisdom.

The Museum of Modern Art’s staggering “Picasso Sculpture” is in the third category. Large, ambitious and unavoidably, dizzyingly peripatetic, this is a once-in-a-lifetime event. It sustains its vision through a ring of 11 grand spaces on the museum’s fourth floor, tracing the serial genre-bending forays into three dimensions wrought by this 20th-century titan of painting. Each bout lasted a few years and was different from the one before, and each has been given its own gallery, more or less.

Works from “Picasso Sculpture” at MoMA 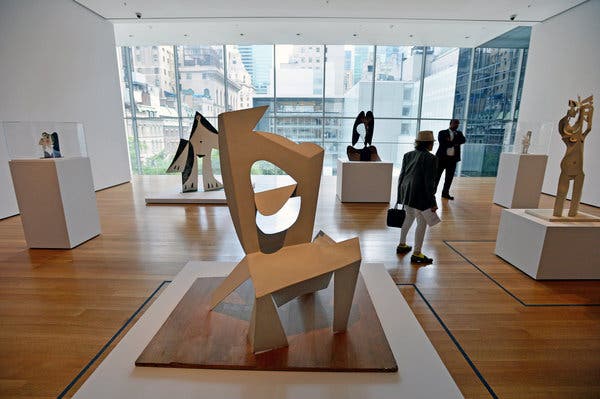 With one stunning exception — the voluptuous saturnine Marie-Thérèse Walter — the women in Picasso’s life don’t herald stylistic changes in the round as they tend to on canvas. In sculpture, the materials become the muses.

The show, which opens on Monday, is the latest in a string of landmark Pablo Picasso exhibitions for which the Modern has been justly famous since 1939. It is full of loans that perhaps only this museum has the clout to secure, including about 50 pieces from its collaborator, the Musée Picasso in Paris. The approximately 140 sculptures here were made between 1902 and 1964; encompass at least 10 media — among them wood, plaster, sheet metal, clay, beach-smoothed pebbles — and, in assemblage, all manner of found objects great and small. The galleries are dotted with works never before exhibited in New York, and reunite related efforts not seen together since they were in Picasso’s studio. 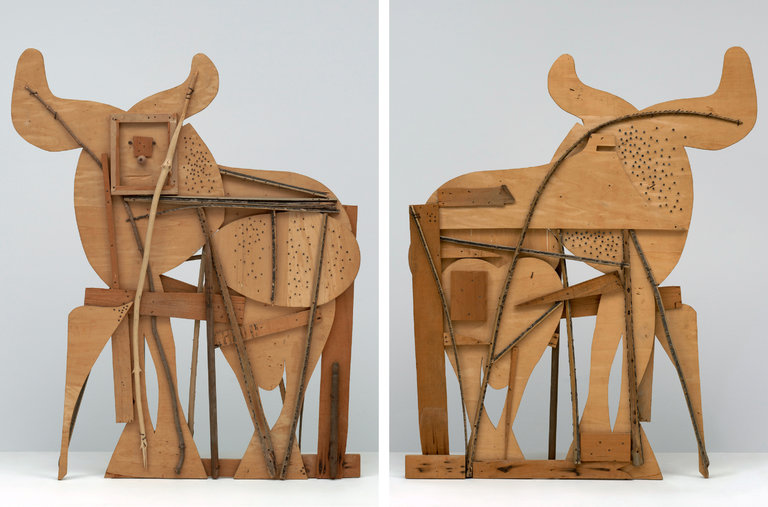 A Last-Minute Guide to ‘Picasso Sculpture’ at MoMA

This “once-in-a-lifetime” exhibition at the Museum of Modern Art, which brings together more than 100 Picasso works, will close on Feb. 7.

The show’s two grandest, most thrilling reunions are the gathering in its second gallery of all six “Glass of Absinthe” sculptures of 1914, those tiny weirdly Keatonesque charmers of painted bronze that can suggest drunken faces and profiles; and in its fourth, the five monumental tumescent heads in white plaster of Marie-Thérèse, more than have ever been shown together, at least in the United States. Seen from the vantage point of the absinthe glasses, the first Marie-Thérèse bust looms in the distance, as if at the end of a garden.

High points aside, there hasn’t been a Picasso sculpture survey of this scope in this country since 1967. That’s when the first large exhibition of sculpture that Picasso ever permitted reached the Modern after incarnations in London and Paris. He kept his sculptures close, like family, and none closer than the great plasters, which were apparently absent from the ’67 presentation. He lived among great jumbles of them from the 1930s on, as attested by the photographs that Brassai took in the artist’s studios between 1932 and 1945. Two dozen Brassai images line a small gallery here, adding to the show’s ricocheting cross-references and insights.

Like its predecessor, this exhibition raises the question of whether Picasso was a better sculptor or painter. It’s a tough call. In each medium, he disrupted art with a track-switching masterpiece: In painting there is the vehement “Demoiselles d’Avignon” of 1907, on view in the fifth-floor galleries, one of the central pylons on which he and Braque erected Cubism. And he did art perhaps an even greater favor with the boxy constructed wall piece “Guitar” — a 1914 work that initiates modern sculpture by establishing space itself — hollowness, volume, weightlessness — as one of its primary materials.

Picasso was more completely himself in three dimensions: a magician, a magpie genius, a comedic entertainer and a tinkerer with superb reflexes. His many gifts — versatility, voraciousness, a need for constant reinvention — are more sharply apparent in real space and tangible materials. We can’t miss his consummate grasp of tactility and form or of the potential for found objects and materials to lead double lives. Screws could be legs of a girl reading a book. A spigot could be the crest of a crane whose body and tail feathers were once the head of a shovel. A small flat-faced deity carved from a scrap of wood is reddened and rubbed until it looks like ancient terra cotta.

With the exception of cast bronze, which he seems not to have cared for, Picasso never met a material he couldn’t subdue, exalt and transform at the same time, nor come across an idea in other art — whether ancient or contemporary — that he could not use. There’s no wasted motion, not an extra grain of matter, just a supreme economy. Even pedestrian pieces have redeeming aspects. The inexplicably beloved bronze “Man With a Lamb” of 1943 may strike you as the best Leonard Baskin ever, or maybe a monument to John Cleese, but the big clumsy hands with which the man grasps the struggling creature are extraordinary. And, in fact, Picasso mastered bronze when he personalized it by painting it, as he had with the absinthe glasses.

That’s just one way he brought painting with him to sculpture. In the show’s eighth gallery, covering 1945 to 1953, he paints with glaze on ceramic vessels in the shape of figures and animals, on bronze casts of assemblages, including the shovel-backed “Crane,” and on a woman and toddler cobbled together from flimsy scraps of lumber that might be a work by an outsider artist. Here also, he makes monstrous assemblage flowers for a ceramic pot and a watering can from wood, metal and crockery shards ingeniously stuck together with plaster and painted. Their bristling energy and yellow colors suggest a homage to van Gogh’s sunflowers. And then, in the same time span, he goes tiny and smooth, incising stunning little faces on impeccably chosen beach pebbles, out-Kleeing Paul Klee with a little Cycladic thrown in for good measure.

Picasso’s constant motion is much more apparent, and maybe more fruitful, in sculpture. In the show’s opening gallery, which covers 1902 to 1909, we see him first in capable thrall to Gauguin with a pint-size unfired clay rendering of an old seated woman, whose sensitive face is clearer in a Brassai photograph later in the show. But soon come the double jolts of Iberian and African sculpture, evidenced by a scary little wood idol, carved from what once seems to have been a table leg painted green. Its furious black eyes are the heads of tiny screws.

He also always cut his losses. In this first gallery, the 1909 bronze “Head of a Woman” is powerful as ever, but also more clearly one of the great dead ends in early modernism: a futile attempt to bring the flickering facets of Analytical Cubism, and Cézanne into three dimensions. The future of sculpture lay with Braque’s innovation, Cubist collage.

Goaded by African art, Picasso then arrived at the groundbreaking “Guitar” by coaxing collage’s flat clean shapes into three dimensions. This mirage of hovering planes, voids and shadows in sheets of cutout, darkly rusted ferrous iron is simultaneously a mask, a body and a musical instrument. In addition to breaking open sculptural space, it made self-evident structure almost de rigueur. Next to it hangs its crucial dry run, an exact but radiant replica in creamy paper and paperboard. They preside over the absinthe glass bronzes like proud parents.

All these works — the guitars, the glasses — pointed toward abstraction, but again Picasso moved on, leaving it to others to develop. Almost every sculpture he ever made during the rest of his long life was a recognizable thing, usually a living one, whether human or animal. As this show proves, it was as if — having irrevocably altered sculpture with the guitars — he then set out to reveal all the ways to depict the figure that remained to be explored.

And yet the guitars in particular haunt many of these efforts. Their hollowness is implicit in the great vegetal shapes of the plaster busts of Marie-Thérèse Walter, who looks dominant and alert in sculpture as she rarely does on canvas, and who might be given Braque-like billing as collaborator.

The guitars’ planar composition is explicit in the proto-installation piece “The Bathers,” whose six flattened sentinels Picasso made in 1956, using more decrepit lumber and the occasional ingeniously placed open frames. The planes and weightlessness recombine in the faces and figures and one wizardly chair formed from bent and painted sheet metal in the show’s final gallery. Some of these works are mostly white. Others served as tensile canvases for color, most notably, “Woman With Hat,” a pop-out reprise of a frequent Picasso motif: a woman in an armchair. All of them seem ready to take flight over the Modern’s garden just beyond the window.

“Picasso Sculpture” has been wrested into being by Ann Temkin, chief curator, and Anne Umland, curator, both in the Modern’s department of painting and sculpture, and Virginie Perdrisot, the Musée Picasso’s curator of sculpture and ceramics. We are in their debt.

Each gallery of this brilliantly installed effort is an exhibition unto itself, full of subtle links, allusions and contrasts that tie the works together or hold them apart. The last gallery delivers you back to the entrance and the circular path — a great chain of being in art — is fitting: Picasso’s sculptural progress was nonlinear, and, anyway, one’s impulse is to keep circling through, taking in more and more with each rotation.

This is one of the best exhibitions you’ll ever see at the Museum of Modern Art, especially in its current iteration. The fourth-floor galleries, which usually house the permanent collection, postwar division, have never looked better. The show’s spacious installation — every piece (save wall pieces) can be seen in the round — redeems at least this part of the museum’s soul-killing 2004 expansion. It also suggests that too many works on display may mean that people look less, because they move faster and more obliviously. If the Modern’s curators can reinstall fewer works after the close of this show, visitors might stand a better chance of becoming genuine art lovers rather than art tourists wielding smartphones.