Bobby (Blue) Bland, the debonair balladeer whose sophisticated, emotionally fraught performances helped modernize the blues, died on Sunday at his home in Germantown, Tenn., a suburb of Memphis. He was 83.

His death was confirmed by his son, Rodd, who played drums in his band.

Though he possessed gifts on a par with his most accomplished peers, Mr. Bland never achieved the popular acclaim enjoyed by contemporaries like Ray Charles and B. B. King. But he was nevertheless a mainstay on the rhythm-and-blues charts and club circuit for decades.

His vocals, punctuated by the occasional squalling shout, were restrained, exhibiting a crooner’s delicacy of phrasing and a kind of intimate pleading. He influenced everyone from the soul singers Otis Redding and Wilson Pickett to rock groups like the Allman Brothers and The Band. The rapper Jay-Z sampled Mr. Bland’s 1974 single “Ain’t No Love in the Heart of the City” on his 2001 album, “The Blueprint.”

Mr. Bland’s signature mix of blues, jazz, pop, gospel and country music was a good decade in the making. His first recordings, made in the early 1950s, found him working in the lean, unvarnished style of Mr. King, even to the point of employing falsetto vocal leaps patterned after Mr. King’s. Mr. Bland’s mid-’50s singles were more accomplished; hits like “It’s My Life, Baby” and “Farther Up the Road” are now regarded as hard-blues classics, but they still featured the driving rhythms and stinging electric guitar favored by Mr. King and others. It wasn’t until 1958’s “Little Boy Blue,” a record inspired by the homiletic delivery of the Rev. C. L. Franklin, that Mr. Bland arrived at his trademark vocal technique.

“That’s where I got my squall from,” Mr. Bland said, referring to the sermons of Mr. Franklin — “Aretha’s daddy,” as he called him — in a 1979 interview with the author Peter Guralnick. “After I had that I lost the high falsetto. I had to get some other kind of gimmick, you know, to be identified with.”

The corresponding softness in Mr. Bland’s voice, a refinement matched by the elegant formal wear in which he appeared onstage, came from listening to records by pop crooners like Nat King Cole, Tony Bennett and Perry Como. 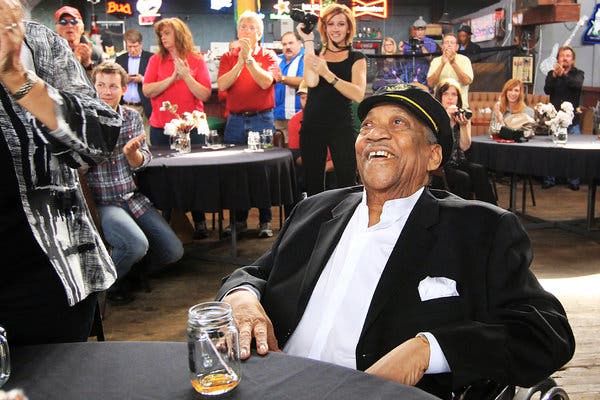 Mr. Bland was honored at the Memphis Music Hall of Fame in 2012.Credit...Nikki Boertman/The Commercial Appeal, via Associated Press

Just as crucial to the evolution of Mr. Bland’s sound was his affiliation with the trumpet player and arranger Joe Scott, for years the director of artists and repertory for Duke Records in Houston. Given to dramatic, brass-rich arrangements, Mr. Scott, who died in 1979, supplied Mr. Bland with intricate musical backdrops that set his supple baritone in vivid relief.

The two men accounted for more than 30 Top 20 rhythm-and-blues singles for Duke from 1958 to 1968, including the No. 1 hits “I Pity the Fool” and “That’s the Way Love Is.” Steeped in vulnerability and emotional candor, his performances earned him a devoted female audience.

Though only four of his singles from these years — “Turn On Your Love Light,” “Call on Me,” “That’s the Way Love Is” and “Ain’t Nothing You Can Do” — crossed over to the pop Top 40, Mr. Bland’s recordings resonated with the era’s blues-leaning rock acts. The Grateful Dead made “Love Light” a staple of their live shows. The Band recorded his 1964 single “Share Your Love With Me” for their 1973 album, “Moondog Matinee.” Van Morrison included a version of “Ain’t Nothing You Can Do” on his 1974 live set, “It’s Too Late to Stop Now.”

Mr. Bland himself broke through to pop audiences in the mid-’70s with “His California Album” and its more middle-of-the-road follow-up, “Dreamer.” But his greatest success always came in the rhythm-and-blues market, where he placed a total of 63 singles on the charts from 1957 to 1985. He signed with the Mississippi-based Malaco label in 1985 and made a series of well-received albums that appealed largely to fans of traditional blues and soul music.

Mr. Bland was inducted into the Rock and Roll Hall of Fame in 1992 and received a Grammy Award for lifetime achievement in 1997.

Robert Calvin Brooks was born on Jan. 27, 1930, in Millington, Tenn., just north of Memphis. His father, I. J. Brooks, abandoned the family when Bobby was very young. His mother, Mary Lee, married Leroy Bridgeforth, who also went by the name Leroy Bland, when Bobby was 6.

Mr. Bland dropped out of school in the third grade to work in the cotton fields. Though he never learned to write music or play an instrument, he cited the music of the pioneering blues guitarist T-Bone Walker as an early influence.

After moving to Memphis in 1947, Mr. Bland began working in a garage and singing spirituals in a group called the Miniatures. In 1949 he joined the Beale Streeters, a loose-knit collective whose members at various points included Johnny Ace, Rosco Gordon, Earl Forest and B. B. King, all of whom went on to become popular blues performers as solo artists.

Mr. Bland also traveled as a part of the Johnny Ace Revue and recorded for the Chess, Modern and Duke labels before being drafted into the Army in 1952. Several of these recordings were made under the supervision of the producer Sam Phillips at Sun Studios in Memphis; none sold particularly well.

After his time in the service Mr. Bland worked as a chauffeur, a valet and an opening act for the Memphis rhythm-and-blues singer Junior Parker, just as he had for Mr. King. He toured as a headliner throughout the ’60s, playing as many as 300 one-night engagements a year, a demanding schedule that exacerbated his struggles with alcohol. He performed widely, in the United States and abroad, until shortly before his death.

In addition to his son, Rodd, Mr. Bland’s survivors include his wife, Willie Mae; a daughter, Patrice Moses; and four grandchildren. Rodd Bland said his father had recently learned that the blues singer and harmonica player James Cotton was his half-brother.

Mr. Bland’s synthesis of Southern vernacular music and classy big-band arrangements made him a stylistic pioneer, but whatever he accomplished by way of formal innovation ultimately derived from his underlying faith in the emotional power of the blues.

“I’d like to be remembered as just a good old country boy that did his best to give us something to listen to and help them through a lot of sad moments, happy moments, whatever,” he said in a 2009 interview with the syndicated “House of Blues Radio Hour.”

“Whatever moments you get of happiness, use it up, you know, if you can, because it don’t come that often.”