Pol Pot, the Mass Murderer Who Is Still Alive and Well - The New York Times

Week in Review|Pol Pot, the Mass Murderer Who Is Still Alive and Well https://nyti.ms/298t5I4 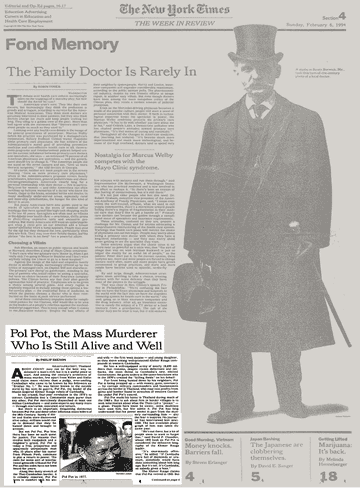 Credit...The New York Times Archives See the article in its original context from
February 6, 1994, Section 4, Page 1Buy Reprints View on timesmachine TimesMachine is an exclusive benefit for home delivery and digital subscribers. About the Archive This is a digitized version of an article from The Times’s print archive, before the start of online publication in 1996. To preserve these articles as they originally appeared, The Times does not alter, edit or update them. Occasionally the digitization process introduces transcription errors or other problems; we are continuing to work to improve these archived versions.

A BODY COUNT may not be the best way to measure a man's evil, but it is a useful place to start. And among the century's architects of mass murder, few apart from Hitler and Stalin could claim more victims than a pudgy, ever-smiling Cambodian who came to be known by his followers as "Brother No. 1." He was better known to the outside world by his nom de guerre, Pol Pot, the leader of the Maoist-inspired Khmer Rouge rebels of Cambodia.

In his crazed, four-year revolution in the 1970's to convert Cambodia into a Communist state purer than any other, Pol Pot mercilessly dispatched at least one million Cambodians -- and some experts say many more -- through starvation, execution and torture.

But there is an important, disquieting distinction between Pol Pot and these other infamous mass killers of the 20th Century. Surely if Hitler and Stalin were discovered alive today, millions would rise up to demand that they be hunted down and brought to account.

But not Pol Pot. For him there has been no such quest for justice. For reasons that involve both realpolitik and a neighbor's greed, Pol Pot is today a free, prosperous and apparently unrepentant man who, 15 years after his ouster from Phnom Penh, continues to plot a return to power. The calls for some sort of international genocide tribunal for Pol Pot and his aides have not been heard for years.

Along this dusty stretch of the Thai-Cambodian border, it is reliably reported, Pol Pot lives in comfort with his second wife -- the first went insane -- and young daughter, as they move among well-protected Khmer Rouge compounds in western Cambodia.

He has a well-equipped army of nearly 10,000 soldiers that remains, despite recent defections and setbacks, the main threat to Cambodia's new, elected Government. He gives orders to the same henchmen who in the 1970's created the "killing fields" on his behalf.

Far from being hunted down by his neighbors, Pol Pot is being propped up -- with money, guns, sanctuary -- by corrupt military commanders and businessmen across the border in Thailand, who reap vast profits from gems and lumber found in stretches of western Cambodia under Pol Pot's control.

Pol Pot made his home in Thailand during much of the 1980's. But to ask about him in border villages is to seek information about what the Thais call a "peesat" -- a ghost. People here know he exists; some doubtless have seen him, but few admit it. Pol Pot has long understood that his power stems in part from the mystery surrounding him -- and the fear it inspires. No journalist has interviewed him since 1980. The last available photograph of him was taken the same year.

"He's out there, but a lot of people seem to want to forget that," said David P. Chandler, whose 1992 book on Pol Pot is considered the definitive biography of the Khmer Rouge leader.

"It's enormously offensive," he added. "If Cambodia were full of diamonds or uranium, somebody would have done something about him long ago. But it's not. It's Cambodia, so nobody gives a hoot."

The Khmer Rouge claims that Pol Pot retired in 1985. But virtually no one who has closely studied the group in recent years, diplomats and scholars alike, believes it.

His "retirement" is instead thought to have been a ploy to deceive the major powers into believing that the Khmer Rouge had put its murderous past behind it and was entitled to participate in a postwar government. Defectors confirm that Pol Pot is still in charge. "The Khmer Rouge system does not allow for peaceful replacement," said Mr. Chandler. "Pol Pot is there for life."

Pol Pot was born Saloth Sar, the son of a farmer whose family had connections to the Cambodian royal family. Described as good-natured but intellectually incurious as a boy, he was sent to France in 1949 to study electrical engineering and there fell under the sway of the French Communist Party. He returned to Cambodia in the 1950's a dedicated secret Communist.

In 1975, the Khmer Rouge took power in Cambodia, using arms supplied by Vietnam and China to overthrow the American-backed Government of Lon Nol. At Pol Pot's order, the Khmer Rouge mounted a draconian social transformation. Foreign-educated intellectuals, business people and monks were slaughtered along with anyone else who might challenge a revolution intended to turn Cambodia into a giant agricultural commune. Cities were emptied, borders sealed.

When Vietnam invaded in December 1978, the carnage directed by Pol Pot had been confirmed by refugees and documented, yet he was allowed to escape into Thailand. There, the Government -- with what officials in Thailand say was the tacit approval of the United States and other nations that saw Vietnam as a greater threat than the Khmer Rouge -- offered him sanctuary. 'Sweetly Smiling'

The Thai Army built him a compound outside the eastern Thai border town of Trat. The compound, "Office 87," ringed by Thai and Khmer Rouge soldiers, became Pol Pot's base for his insurgency against the government installed by Vietnam in Phnom Penh.

Office 87 also served as a training center for young recruits, and Pol Pot is remembered by former students there both for mesmerizing lectures on the Vietnamese "dogs" and for his kindliness. "Part of what so eerie about Pol Pot is that anyone has met him leaves you with an impression of a man who is sweetly smiling and terribly deferential, " said a Western diplomat in Bangkok.

In the compound, there were separate houses for Pol Pot, his wife, daughter and close aides. Diplomats in Bangkok say there have been many reports in recent years of Pol Pot's travels to the Thai capital for medical care and visits with Thai officers.

During a dozen years of Cambodian civil war, China, like Thailand a traditional foe of Vietnam, armed the Khmer Rouge. The United States pushed weapons and supplies across the border to two non-Communist rebel groups allied with the Khmer Rouge.

China and the United States used the Thais as a conduit for the arms, and the Thais gladly obliged. For the Thai Army, Pol Pot is the best sort of business partner -- reliable and publicity-shy. Thai commanders and traders used the Khmer Rouge to make millions of dollars from the border trade in gems, lumber and arms.

Cambodia's civil war ended, at least on paper, in 1991, when the Khmer Rouge, its allies and the Vietnamese-backed Cambodian Government signed a United Nations peace treaty. But Pol Pot quickly reneged on the deal and the Khmer Rouge boycotted last spring's internationally supervised elections.

Even as he tried to sabotage the United Nations peacekeeping operation, Pol Pot retained friends, notably a handful of Thai commanders and business leaders. A former Thai Army commander has described him as a "good man, a very misunderstood man."

The danger posed by the alliance became clear again last December, when the Thai police stopped a truck at the border south of here with weapons intended for the Khmer Rouge. The Thai military was forced to admit that the arms had come from its warehouses. Commanders insisted they had been taken without authorization, an explanation many diplomats found hard to believe.