THE EPISCOPALIANS: AN AMERICAN ELITE WITH ROOTS GOING BACK TO JAMESTOWN - The New York Times

U.S.|THE EPISCOPALIANS: AN AMERICAN ELITE WITH ROOTS GOING BACK TO JAMESTOWN https://nyti.ms/29KXiJW 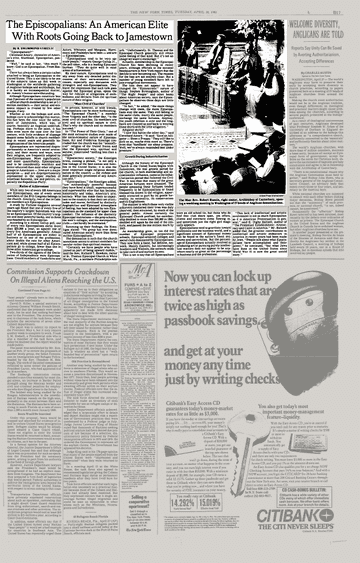 Credit...The New York Times Archives See the article in its original context from
April 28, 1981, Section B, Page 17Buy Reprints View on timesmachine TimesMachine is an exclusive benefit for home delivery and digital subscribers. About the Archive This is a digitized version of an article from The Times’s print archive, before the start of online publication in 1996. To preserve these articles as they originally appeared, The Times does not alter, edit or update them. Occasionally the digitization process introduces transcription errors or other problems; we are continuing to work to improve these archived versions.

''Episcopalians?'' Cleveland Amory, chronicler of America's elite, blueblood, Episcopalian, pondered. ''Well,'' he said at last, ''this much I know: God is an Episcopalian. From Boston.'' There has always been a certain cachet attached to being an Episcopalian in the United States. This is not likely to be one of the subjects taken up this week in Washington at the worldwide gathering of Anglican bishops and archbishops, but it is hardly an inconsequential matter, Mr. Amory's humor notwithstanding.

Although Episcopalians constitute less than 2 percent of the country's population - official church membership is set at 3.1 million members - their social and economic impact is rivaled by few other groups, if any.

Whether or not the bishops and archbishops care to acknowledge this matter, this has been the case since the settlement of Jamestown, which was, of course, basically an Anglican undertaking. Perhaps more to the point, it has been even more the case over the last century, with little evidence of slippage despite some falloffs in church membership in recent years and generally homogenization of the American people.

Episcopalians are represented disproportionately in America's social aristocracy, and their mores and ways, even their religion, are frequently adopted by non-Episcopalians. More significantly, and more quantifiably, Episcopalians tend to be considerably wealthier and better educated than most other religious groups in Americans - Jews are a major exception -and are disproportionately represented in the upper reaches of American business, law and politics, expecially the Republican Party. Ratios of Achievement

Two-thirds of the signers of the Declaration of Independence were Episcopalians. Untold numbers of Vanderbilts and Astors, Whitneys and Morgans, Harrimans and Peabodys have been - and are - Episcopalians.

''Episcopalians tend to be very up-scale people,'' reports George Gallup Jr., the poll taker, who is a leading Episcopal layman. ''They do quite well in most areas of achievement.''

By their nature, Episcopalians tend to shy away from any detailed public discussion of their socio-economic successes, especially any discussion with strangers and non-Episcopalians. They leave the impression that such talk goes against the Episcopal grain, opens the way for ridicule or allegations of snobbishness and detracts from the spiritual nature of their religion. 'Most Civil of Churches'

In private, however, or with friends, Episcopalians can be more forthcoming. ''The Episcopal Church,'' a member from Virginia said the other day, ''is the most civil of churches. Its members are civil and its spiritual nature is civil. That's why the church and its members succeed.''

In ''The Power of Their Glory,'' one of the most extensive studies ever made of the socio-economic nature of Episcopalians, Kit and Frederica Konolige concluded that the church was the ''semiofficial'' religion of the United States and that the Episcopal way, spiritual and secular, constituted ''nothing less than a culture.''

''Episcocratic society,'' the Konoliges wrote, coining a phrase, ''is not only a fine linkage of the best names and families in the United States; it is also the most important single religious denomination in the country - the richest and most generally prominent of any American sect.''

''Episcopalians,'' the Konoliges added, ''are outstandingly powerful because they have bred a small, supersuccessful and superwealthy elite that has become, historically and today, America's aristocracy. What has made them so important to the country is that their set of attitudes and mores, fertilized by distinctly Anglophiliac and Episcopal atmosphere of feeling, has been adopted by non-Episcopalians as the standard for upper class conduct. The influence of the distinctly Episcopal institutions - the prep schools, the men's colleges, and the metropolitan clubs - can hardly be overstated.'' Role in American Society

Summing up their findings, the Konoliges stated: ''No group has ever dominated American society more than three million Episcopalians.''

The domination is such that the church sometimes seems to attract members for secular rather than spiritual reasons. ''Certainly we have people who have joined as part of being upward mobile,'' said the Rev, Richard T. Hawkins, rector of St. Thomas Episcopal Church in White Marsh, Pa., a northern Philadelphia suburb. ''Unfortunately, St. Thomas and the Episcopal Church generally still retain some feeling of that kind. But it's not an image we want to encourage.''

Actually, membership in the Episcopal Church has been declining in recent years, although officials at the national headquarters in New York report that the decline is now bottoming out. The reasons for the loss are not entirely clear. But a number of young members have left to join evangelical movements.

The loss does not appear to have changed the ''Episcocratic'' nature of things. Stephen Birmingham, author of ''The Right People'' and other books about American society, says the Episocpalians he observes these days are little changed.

''In fact,'' he added, ''the more things change with them, the more Episcopalians stay the same. They still belong to the same clubs, marry the same people, exchange the same fortunes. Anyway, the youth rebellion is over and the longhairs are cleaned up and back to wearing those shirts with the little alligators.''

Alligator shirts?''I saw this button the other day,'' said Cleveland Amory. ''It said: 'Save an Alligator - Shoot a Preppy.' They still like to pick on us, maybe even more so. There's even that 'handbook' out about preppies. Well, we've always responded best under pressure.'' Growth During Industrialization

Although the history of the Episcopal Church in the United States begins with Jamestown, the real growth period for the church, in both membership and socioeconomic influence, came in the industrialization period that followed the Civil War. It was then that many of the great American fortunes were amassed. The people amassing these fortunes tended frequently to be Episcopalians or found themselves drawn to the religion, apparently attracted in part by its gentle formality, its rationality, its conservatism and its Englishness.

The manner in which these very visible achievers conducted their lives was duly observed, then emulated, by much of the general public. Almost certainly the Episcopal Church profited, for membership doubled to more than 350,000 in 1885, doubled still again by the end of the century, and passed the one million mark by 1915.

As membership grew, so too did the number of Episcopal preparatory schools, Episcopal-oriented colleges and social clubs dominated by Episcopalians. They now form a loose, but definite, network. Mainly Eastern, but increasingly Southern and Western, the network tends to take care of and nurture its own.

This is not to say that all Episcopalians wore an old school tie, but those who do find that club doors open, job offers, clients and contracts come flowing in, and sometimes just the right girl magically appears.

Episcopalians tend to gravitate toward professions and the business world, and a significant amount of Episcopal money can be found in the nation's finest museums and universities. But the percentage of Episcopalians actually involved in producing art or pursuing purely intellectual matters does not appear to be anywhere nearly as great as the percentage in business and the professions.

''This lack of intellectual and artistic involvement is not so much Episcopalian as it is American Protestantism in general,'' said E. Digby Baltzell, author of ''The Protestant Establishment: Aristocracy and Caste in America.'' Mr. Baltzell added that the greatest contributions in intellectual and artistic endeavors in America in recent years had been made by Jews. ''People talk about what Episcopalians have accomplished and their power,'' he continued, ''but what Jews have done in the United States since World War II is now the great untold story.''