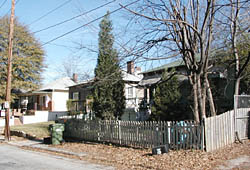 Corner lot in Howell Station Historic District
National Register photograph by Yen Tang The Howell Station Historic District is located northwest of downtown Atlanta in an area dominated by light industry associated with the development of Marietta Street. The district consists of intact residential buildings, a recreational park, and four churches in a historically blue-collar neighborhood. Almost all of the built environment here constructed before the Civil War, including plantation and farm houses, was destroyed during General William T. Sherman's March to the Sea in 1864. Interest in the area was renewed when real estate developers in the 1890s laid out a grid pattern and subdivided the land into lots. The types of residential buildings located within the neighborhood include Shotgun, Georgian cottage, Bungalow, Queen Anne cottage and Hall-Parlor.

Historically, a row of commercial buildings fronted West Marietta Street, although few remain intact or retain integrity today. The commercial area consisted of two groceries, one meat market, a barber, and a hotel. The neighborhood also had one school, Goldsmith School, for white students, while black students had to leave the neighborhood to attend English Avenue School or Booker T. Washington High School. Knight Park, located in the northwest section of the neighborhood, is an open recreational space with sloping hills and mature trees. A community building built in 1945 is located within the park and is used for storage. The setting outside the neighborhood is dominated by light industry because of nearby Southern Railway (now Norfolk Southern). The remaining commercial stores not on West Marietta Street serve as a transition between the neighborhood and the industries.

The Howell Station Historic District is generally bounded by W. Marietta, Rice, Baylor and Herndon sts., Niles Cir. and Longley Ave. The houses in the district are private residences and are not open to the public.