LifeWatch was established as part of the European Strategy Forum on Research Infrastructure (ESFRI) and can be seen as a virtual laboratory for biodiversity research. The concept behind LifeWatch was developed in the 1990s and early 2000s, with the support of EU Networks of Excellence related to biodiversity and ecosystem functioning. This - amongst others - included the MarBEF project, which was the driving project behind the creation of the European Register of Marine Species (ERMS) - the predecessor of the World Register of Marine Species (WoRMS).

Belgium contributes to LifeWatch with varied and complementary "in-kind" contributions. These are implemented under the form of long lasting projects by different research centers and universities spread over the country and supported by each respective political authority. Within LifeWatch, the Flanders Marine Institute - host of the World Register of Marine Species (WoRMS) - has taken on the responsibility to develop the LifeWatch Species Information Backbone.

The mission of LifeWatch is to advance biodiversity research and to provide major contributions to address the big environmental challenges, such as knowledge-based solutions to environmental managers in the framework of preservation or dealing with long-standing ecological questions that could so far not be addressed due to a lack of data or - more importantly - a lack of good and easy access to data.

The LifeWatch mission is being achieved by giving access to data and information through a single infrastructure which (virtually) brings together a large range and variety of datasets, services and tools. Scientists can use these tools and services to construct so-called Virtual Research Environments (VREs), where they are able to address specific questions related to biodiversity research, including e.g. topics related to preservation.

The construction and operation of the LifeWatch e-infrastructure is revolutionizing the way scientists can do biodiversity research. They are not only offered an environment with unlimited computer and data storing capacity, but there is also transparency at all stages of their research process and the generic application of the e-infrastructure open the door towards more inter- and multidisciplinary research.

The Flanders Marine Institute (VLIZ) is responsible for the set-up of the LifeWatch Species Information Backbone, as a central part of the European LifeWatch Infrastructure.

The backbone aims to (virtually) bring together different component databases and data systems, all of them related to taxonomy, biogeography, ecology, genetics and literature. By doing so, the backbone standardises species data and integrates biodiversity data from different repositories and operating facilities and is the driving force behind the species information services of the Belgian LifeWatch.be e-Lab and the Marine Virtual Research Environment (Marine-VRE) that are being developed. 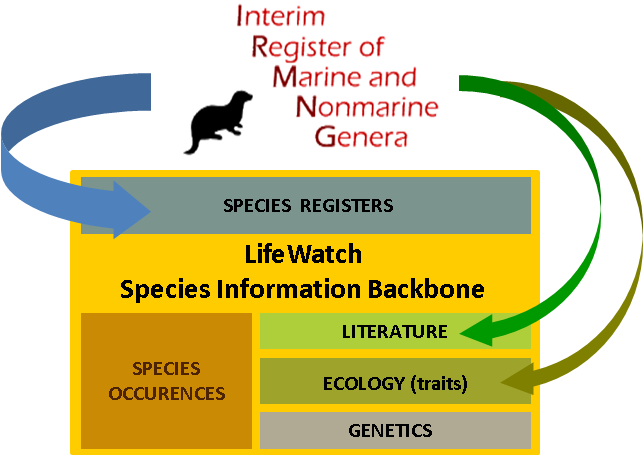 IRMNG not only contributes to the taxonomy part of the backbone, but also to the literature and ecology part. The documentation of all the genera ever described, including their higher classification is a valuable contribution to the Species Registers part of the backbone. By listing all ever described genera, IRMNG also provides a very powerful tool to identify homonyms and to help other species registers in identifying gaps in their content. The linked literature to each entry - from original descriptions to large-scale taxon overviews and ecological papers, similar as in WoRMS - helps users to trace back information and to access relevant publications and is fully at the disposal of the LifeWatch Species Information Backbone. As IRMNG also stores trait information - marine or not-marine and fossil or recent - these data contribute to the traits-part of the backbone, allowing e.g. the link between taxonomy and traits through LifeWatch web services.

Through the LifeWatch Species Information Backbone, users benefit in several ways, amongst others by:

The coordination and development of the LifeWatch Species Information Backbone happens at three different levels:


The work done at all these levels is strongly reflected in the ongoing activities of IRMNG. The work of the IRMNG Data Management Team (DMT) collaborates closely with Tony Rees, the originator of IRMNG. The DMT is currently being funded through the LifeWatch project.