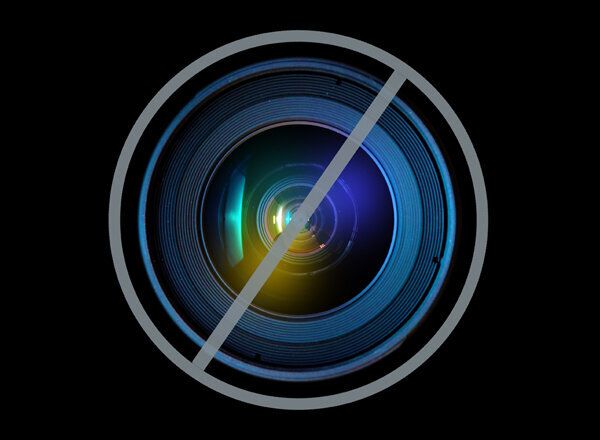 "I am ready." These few words, slipped into a speech that ran for nearly 90 minutes, summed up the message François Hollande tried to convey Sunday before some 25,000 supporters crowded into the Parc des Expositions at Le Bourget, just outside of Paris.

In a hall filled to overflowing, fired up by the fervor of hypermotivated supporters, crushed by flags and posters, drowned out by the noise of vuvuzelas and foghorns, the Socialist candidate has undeniably succeeded in his show of power. From the opening of the festivities, led by Yannick Noah's upbeat concert, to the "Marseillaise" finale, sung on the platform by young supporters, far from the Socialist Party "elephants," there was not one false note in the program of the leader of the Left.

"I am ready." François Hollande's voice was deliberately grave, his expression determined, as though he were turning the page on the unfocussed nature of the post-primary period, the glitches and the vagueness that put the brakes on a soaring take-off.

"I am aware of my task: to embody change, to lead the Left to victory, and to give France back her confidence," the leader from Corr said. "Three months before the first round, what is at stake is France. It is always France." "The soul of France is equality."

Those who are close to the former Socialist Party chief agree: something became clear in Seine-Saint-Denis. At Le Bourget, François Hollande gave his most intimate speech since the beginning of his campaign over a year ago. The result of a personal journey. "Everything in my life has prepared me for this day-my commitments, my responsibilities, the ordeals I have experienced. I am a socialist. I did not grow up on the Left. I had to make the clear decision to reach out for it, he says, evoking his parents, conservative but "with a generous soul." Claiming his own "simplicity" as "the mark of authentic authority."François Hollande took particular care to distinguish himself in every way from his rival, Nicolas Sarkozy, whose name he never actually mentioned. "I am consistent in my choices, I do not need to continually change in order to be myself," he said, taking advantage of the sympathetic crowd.

"I'll let you in on my secret, one that I have kept for a long time but which you have no doubt discovered: I like people, whereas others are fascinated by money," he said.

The anti-bling bling angle is devastating, but there's also a bit of Jacques Chirac in this modest love he's expressing for the first time. The same Chirac who spoke to "this France that I love as much as I love you." Guaranteed success.

Using his advantage over an incumbent President accused of having "degraded" France a step further, François Hollande spoke at length of the values of the Republic.

"Every country has a soul. The soul of France is equality," he declared, brandishing the ideas of secularism, justice, equality, Europe. The presidential effect was welcomed by the public.

"The challenge was not a simple one: to meet very high expectations, while being the serene embodiment of the presidential," said a Socialist supporter after the rally.

"The adversary is finance": the Royal-Montebourg takeover bid

However, François Hollande, who says he bears the "thunderbolt" of 2002 "like a wound," did not make the mistake of forgetting next April 22nd's first round of elections. Jaurès, Mendès-France, Mitterrand, Camus... Not one symbol of the Left was missing in the appeal at Le Bourget. Although the chosen candidate from Corrèze has but rarely veered from the measured line that had marked the path of his campaign until then, he warned "I will promise only what I am capable of delivering," though this will not be possible without making a few concessions to the left wing of the party.

"The adversary is the world of finance," he began, to the applause of a crowd impatient to let Wall Street have it. Broadly echoing the proposals of Arnaud Montebourg and Ségolène Royal, François Hollande committed himself firmly to the Tobin tax and future bank reform. That's too much, say his critics. No matter, as the attack concentrated on the values that are essential to carrying the first round, and are a major expectation of those inclined towards the Left, as our exclusive Viavoice poll demonstrates.

The campaign is, indeed, far from complete. The violent reaction from Sarkozy's UMP party and the criticisms expressed by other parties on the Left demonstrate that the hardest part is yet to come. All the more so since the candidate has revealed only a small part of his program and, for the time being, has chosen to completely overlook costs. As his appearance Sunday evening on television made clear, Hollande has yet to prove that he is capable of fixing the French economy by means other than attacking "finance."

Get set, then, for next Thursday, the day when the winner of the primaries will finally reveal his priorities and his agenda as future President. For those who would believe the election is already in the bag, Martine Aubry has taken it upon herself to set things straight for the weeks to come: "There is only one battle. To fight to the utmost, and to the very end."