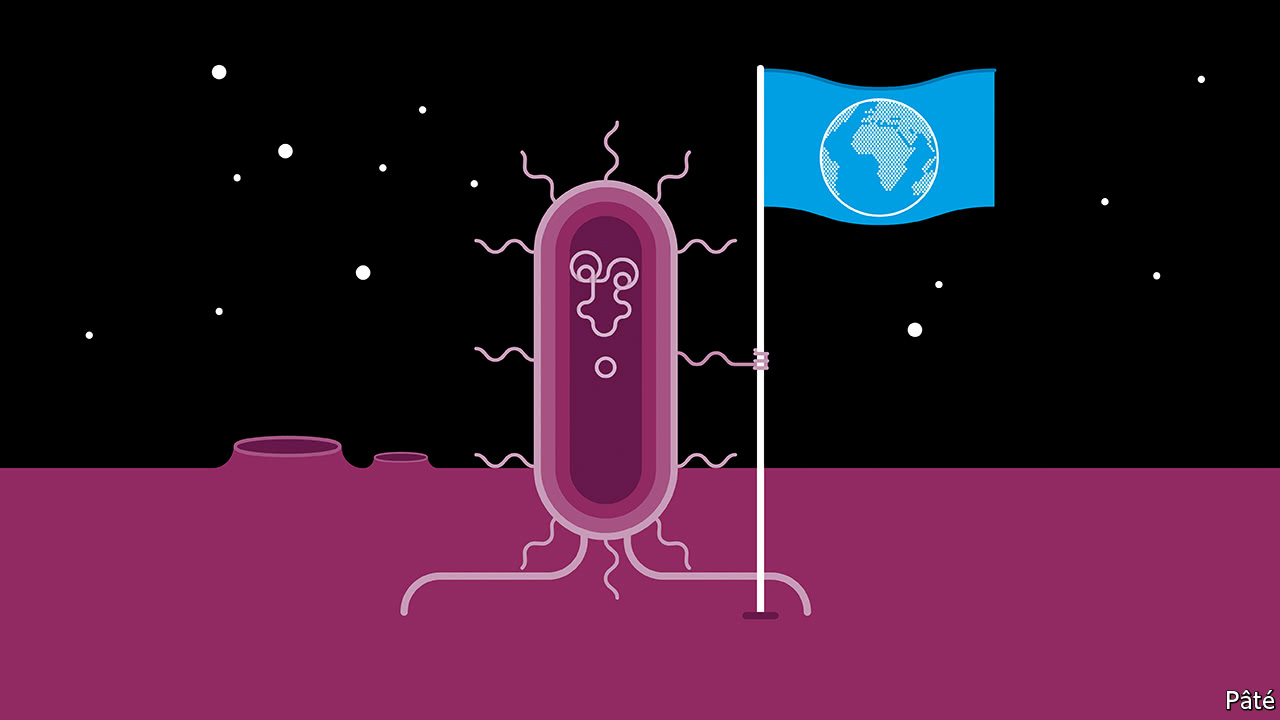 SCIENCE fiction is filled with visions of galactic empires. How people would spread from star system to star system, and communicate with each other in ways that could hold such empires together once they had done so, is, though, very much where the “fiction” bit comes in. The universal maximum speed of travel represented by the velocity of light is usually circumvented by technological magic in such works. The truth is that, unless there has been some huge misunderstanding of the laws of physics, human colonisation of the galaxy will be hard.

A number of scientists reckon a more modest approach towards spreading life to other star systems might be possible. In the chill of deep space, bacteria somehow shielded from cosmic radiation might survive dormant for millions of years. Perhaps alien worlds could be seeded deliberately with terrestrial micro-organisms that might take hold there, jump-starting evolution on those planets.

There are many obstacles to directed panspermia, as this approach is known—and they are not just technical. Religiously minded critics claim “we’re playing God”, says Claudius Gros, a physicist at Goethe University in Frankfurt, who has floated the idea of scattering photosynthesising bacteria and algae on extrasolar planets. Critics argue in particular that “contaminating” other planets with terrestrial life in this way risks altering, or even destroying, any life that has arisen there independently. For support, they point to present-day concerns that bacteria carried by spacecraft might, if some form of life does exist there, do exactly that to Mars. This debate is hypothetical for now. But it will become more urgent if any of the projects currently being discussed to build probes to travel to nearby star systems gets off the drawing board and into space.

One such proposal, sponsored by NASA, is called the Starlight project. Another, the brainchild of Yuri Milner, a Russian venture capitalist, is the Breakthrough Starshot. Both draw on the ideas of Philip Lubin of the University of California, Santa Barbara (UCSB). Dr Lubin suggests using powerful lasers to push craft attached to light sails in the direction of nearby star systems—probably starting with Alpha Centauri, the nearest of the lot. Light sails are thin, reflective sheets large enough for the pressure exerted by beams of light shone at them to provide a meaningful accelerating force in the vacuum of space. Though no such sail has yet been propelled by lasers, the principle of light-sailing has been established by spacecraft deploying sunlight-driven sails, which have successfully accelerated them.

If the sail is big enough, the craft small enough (say, a gram or two) and the laser powerful enough, then acceleration to a significant fraction (20% or so) of the speed of light should be possible. That makes journeys to Alpha Centauri (just over four light-years away) and other nearby stars a meaningful proposition. The idea is that, by the time such lasers could be built—perhaps within a couple of decades—electronics will have shrunk to a point where a spacecraft weighing a gram could carry meaningful instruments. It could also, though, carry quite a lot of bacteria.

At the Starlight project, for which UCSB is the operational headquarters, entertaining the idea of seeding other planets with life involves a certain amount of doublethink. Even looking into taking small, simple animals such as tardigrades along to see how they react to the journey is deemed too controversial for NASA, and thus has to be done on the other side of a metaphorical Chinese wall in the university—despite the fact that an animal could not possibly survive and breed without its supporting ecosystem.

As a private venture, Breakthrough Starshot suffers no such constraint. Although Gregory Matloff, a physicist at New York City College of Technology who is one of Dr Milner’s advisers, says that this project, too, has yet to make up its mind on the question of sending germ packages, that position is not an actual “no”.

One practical problem would be delivering such packages. They would be unlikely to survive collision with a planet at one-fifth light speed, so the craft carrying them would need to slow down beforehand. But this is not part of the plan for either Starlight or Breakthrough Starshot. They both envisage fly-by missions. The apparatus needed for deceleration would be too heavy.

For visionaries looking into the more distant future, however, weight is less of a problem. Those who really want to seed the universe with life are happy to do it slowly. Dr Gros, for one, imagines missions that might take thousands of years to arrive. For these, craft weighing kilograms rather than grams could be involved.

That would nevertheless require some serious rethinking of both the spacecraft and their living payloads. The threat to a craft of a long journey in deep space is that its electronics might be wrecked. Radiation, of which space is full, slowly displaces atoms in solids, to the detriment of any electronic components those atoms are part of. But if such electronics were heated periodically by a thermoelectric generator that employed radioisotopes—a widely used power source that has no moving parts—most of the dislocated atoms would recover their prior positions, Dr Gros says.

The threat to the bacterial payload is similar—too much radiation breaking up the complex molecules of life. To deal with that Hajime Yano of JAXA, Japan’s space agency, suggests that the DNA in organisms on panspermia missions should be modified for extra robustness using the techniques of synthetic biology. This may sound ambitious, but at least one natural organism, a bacterium called Deinococcus radiodurans, has a DNA-repair mechanism that can rebuild genes correctly after heavy exposure to radiation.

To deliver the cargo of such a craft on arrival at a target planet, Dr Gros suggests it could first decelerate by opening a large loop of copper and superconducting ceramics with a burst of electricity. The current in this loop (which would circulate indefinitely, because a superconductor has no resistance) would create a magnetic field that gradually transferred the craft’s kinetic energy to hydrogen atoms in the interstellar medium. Once in the target planet’s gravitational field, the craft could use a tiny electromagnetic rail gun to fire payloads of microbes out of the back at a speed which cancelled out the craft’s forward motion. These payloads would then fall gently to the planet’s surface.

Why anyone would go to all this trouble is an intriguing question. Enthusiasts for the idea of directed panspermia, such as Michael Mautner, a biochemist at Virginia Commonwealth University who is the founder of the Interstellar Panspermia Society, say that if life has any purpose, surely it is to propagate. For him, that is enough. Some privately go further, seeing missions to oxygenate the atmospheres of sterile planets as preparing the ground for human colonisation in the far-distant future. That really is long-term thinking. Such a process would probably take hundreds of thousands, if not millions of years.

As for fears that terrestrial organisms could interfere with life that may exist elsewhere, most proponents of directed panspermia agree that missions should be limited to lifeless worlds. Indeed, if it turns out that life is common elsewhere then the whole idea would be rather pointless. A few, though, consider such precautions unnecessary, arguing that if terrestrial organisms prove more fit to survive on an alien world than life that may be there already, well, that is what evolution is all about. But this remains a fringe view, sometimes derided as “galactic imperialism”.

How to tell from far off whether a planet is indeed inhabited is a matter of debate. Some argue that it will be obvious from the atmosphere. No alien astronomer would doubt, looking at the amount of methane in Earth’s oxygen-rich air, that something odd and probably biological was going on there—for methane is rapidly converted by oxygen into carbon dioxide and water. Mars, however, shows no sign of such chemical disequilibrium, yet many still hope it might prove to support a small amount of simple life.

The case of Mars is, indeed, pertinent. Despite stringent attempts to sterilise Mars-bound craft, Chris McKay, an astrobiologist at NASA, thinks a lot of terrestrial bacteria are already there. He calculates that Curiosity, one of NASA’s Mars rovers, delivered almost 300,000 of them by itself. Those clinging to exposed parts of the rover have probably been killed by radiation in the 5½ years since it landed. But the rest—about half, he reckons, sheltered inside the vehicle—are probably dormant but alive. Were the planet’s atmosphere ever to thicken it would screen radiation, warm Mars and allow rain. The creatures would then seep out and begin reproducing, “happy as pigs in mud”, he says.

Mars’s atmosphere may eventually thicken naturally, as an ageing sun puts out more heat and evaporates now-frozen carbon dioxide. But that will take hundreds of millions of years. Should people, Dr McKay asks, use their knowledge of greenhouse gases to accelerate the process, possibly thus making the place inhabitable by humans? Or should they remove their bug-harbouring gear from Mars, to avoid all risk of the bugs spreading? There is no consensus on these questions, nor on the wider ones of directed panspermia beyond the solar system. But those tempted to squash such efforts before they have even begun might ponder an intriguing fact. Life seems to have arisen surprisingly rapidly on Earth. One explanation for this is that terrestrial life is itself a gift which arrived from a distant living world. Perhaps it is time to pass the favour on.

The fires within the deep
Have Siberian fires been smouldering underground all winter?

The best of our journalism, handpicked each day

Sign up to our free daily newsletter, The Economist today