COVID-19: A MESSAGE FROM THE PUBLISHER 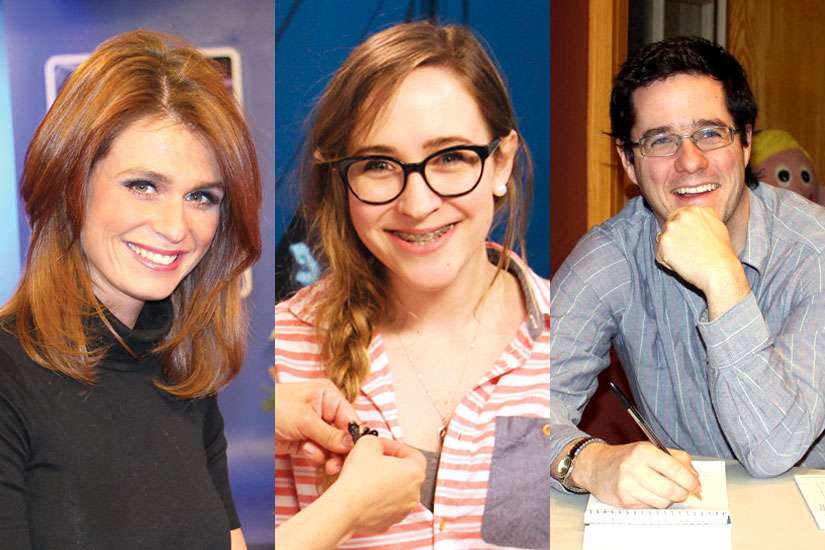 L-R: Faith Goldy, Beth Brown and Desmond Devoy are three of the YSN graduates who have used their experience to find careers in journalism. More than 150 young people have gone through the program in its 15 years in existence. Goldy and Brown photos by Ruane Remy, Devoy photo courtesy of Desmond Devoy

This video is an example of what Digital Edition subscribers have access to. The Digital Edition features the same articles as the print edition PLUS colour photos, videos, audio clips and links. If you are not a subscriber, you can try a free subscription by going here:http://www.catholicregister.org/digitaledition

A young Desmond Devoy was on holiday in British Columbia in 2000 when a Catholic news story fell into his lap. Unable to resist the temptation, the budding writer phoned back to Toronto to report his story to The Catholic Register.

“I had one of those moments where I was just so happy to be in journalism — Catholic journalism,” he recalls.
Devoy was a student, as well as a young reporter for The Register’s newly branded Youth Speak News team, a unique feature in Catholic journalism in this country and beyond. It typically consists of high school and college-aged volunteers who dedicate a year to The Register — while also pursuing their studies — to report on issues of concern to Catholics of all ages.

Fifteen years later, Devoy has parlayed his YSN experience into a career, working as a reporter/photographer at the Perth Courier in the Ottawa Valley. Youth Speak News “gave me a head start of what it was like working in a real newsroom environment. It taught me about the editing process — my editor (Paula Antonello Moore, the driving force behind YSN) was very good, very thorough — and taught me how important it was to get art or photos with your story, about making deadlines, proper sourcing and a lot of the basics. It was great because we were accepted as part of (The Register) team.”

Devoy studied journalism at Humber College and tried to convince his classmates to join YSN for the practical experience. But they were reluctant, uncomfortable to report for a faith-based newspaper. He knew different.

The journey for truth has taken YSN alumni from The Register to spheres where they support the Catholic faith and journalism. Television reporter Faith Goldy is one whose YSN years (2008-09) blossomed into a journalism career.

“I wanted to marry Superman when I grew up, so I had to become Lois Lane,” jokes Goldy.

A deacon from her Ukrainian Catholic parish orchestrated Goldy’s application to YSN.

“From there it snowballed. I went from YSN to Michael Coren’s old program at CTS. He had me on as a token young person. I started editing U of T’s political science journal, and then when Michael got his gig (at Sun News Network), he brought me along as a young Christian kid who was poised to comment on various issues. And within a matter of a year, I was a full-time employee. So really it was my position in YSN that catapulted my entire career in journalism, without a doubt.”

Goldy’s story is not unlike many of the more than 150 students who have gone through the program, some of whom joined The Register. Current Youth Editor Jean Ko Din first wrote for YSN in 2012-13. Web editor Michael Chen did two stints with YSN, while former Youth Editor Carolyn (Girard) Savoie and former Register reporter Sheila Dabu Nonato are also alumni.

Others now in the field include Dylan Robertson, who is investigating homegrown terrorism as the recipient of the 2015 Michelle Lang Fellowship in Journalism, and 2014-15 member Meredith Gillis who shortly after joining the team was hired as news director of The Spur, a radio station in Alberta. Beth Brown finished her year-long YSN term in 2014 reporting from Halifax, and was hired as a journalist and photographer for The Trident newspaper at Halifax’s Canadian Forces Base.

“Catholic youth need to hear from other Catholic youth. They need be told, and more importantly shown, that the Church is alive, that it offers hope, truth and a consistency rare to our modern society,” said Brown.

Others have gone on to work within the Catholic Church. Sarah Du Broy (2006-07) is a communications officer for the Archdiocese of Ottawa and Canadian marketing consultant for the Eternal Word Television Network. Marlena Loughheed (2005-06) is a communications co-ordinator with the Archdiocese of Toronto and credits her YSN editor’s guidance in helping her develop “the courage to network and to have the courage to get a good story, even if it means overcoming your own personal fears and biases.”

Working a few floors above Loughheed at the Archdiocese of Toronto Pastoral Centre, Valeria French, a two-time YSNer, is administrative assistant in the Office of Spiritual Affairs. Manitoba’s Sophie Freynet-Agossa (2006-07) is now Marriage, Family and Life Service co-ordinator with the Archdiocese of St. Boniface.

Andrew Santos (2007-08) continued to focus both on Catholic media and young people, first by working as an associate producer for four years at Salt + Light Television before finding a new passion as youth minister at St. Justin Martyr parish in Unionville, Ont.

“The Catholic Register is no different from any other reputable news organization in the GTA or Canada,” said Santos.

“The professional standard, the ethics of journalism in that office is very hard to beat elsewhere... (with) a huge emphasis on our Catholic faith and tradition. At the same time, The Register upholds the highest standards in the journalism industry.”

(Remy, who works in communications at Toronto’s York University, was Youth Editor with The Catholic Register from 2012-15.)

More in this category: « The man who became Pope The humble beginnings of Youth Speak News »

There are no comments posted here yet

Unlike many media companies, The Catholic Register has never charged readers for access to the news and information on our website. We want to keep our award-winning journalism as widely available as possible, which has become acutely important amid the ongoing COVID-19 crisis. But we need your help.

For more than 125 years, The Register has been a trusted source of faith-based journalism. By making even a small donation you help ensure our future as an important voice in the Catholic Church. If you support the mission of Catholic journalism, please donate today. Thank you. 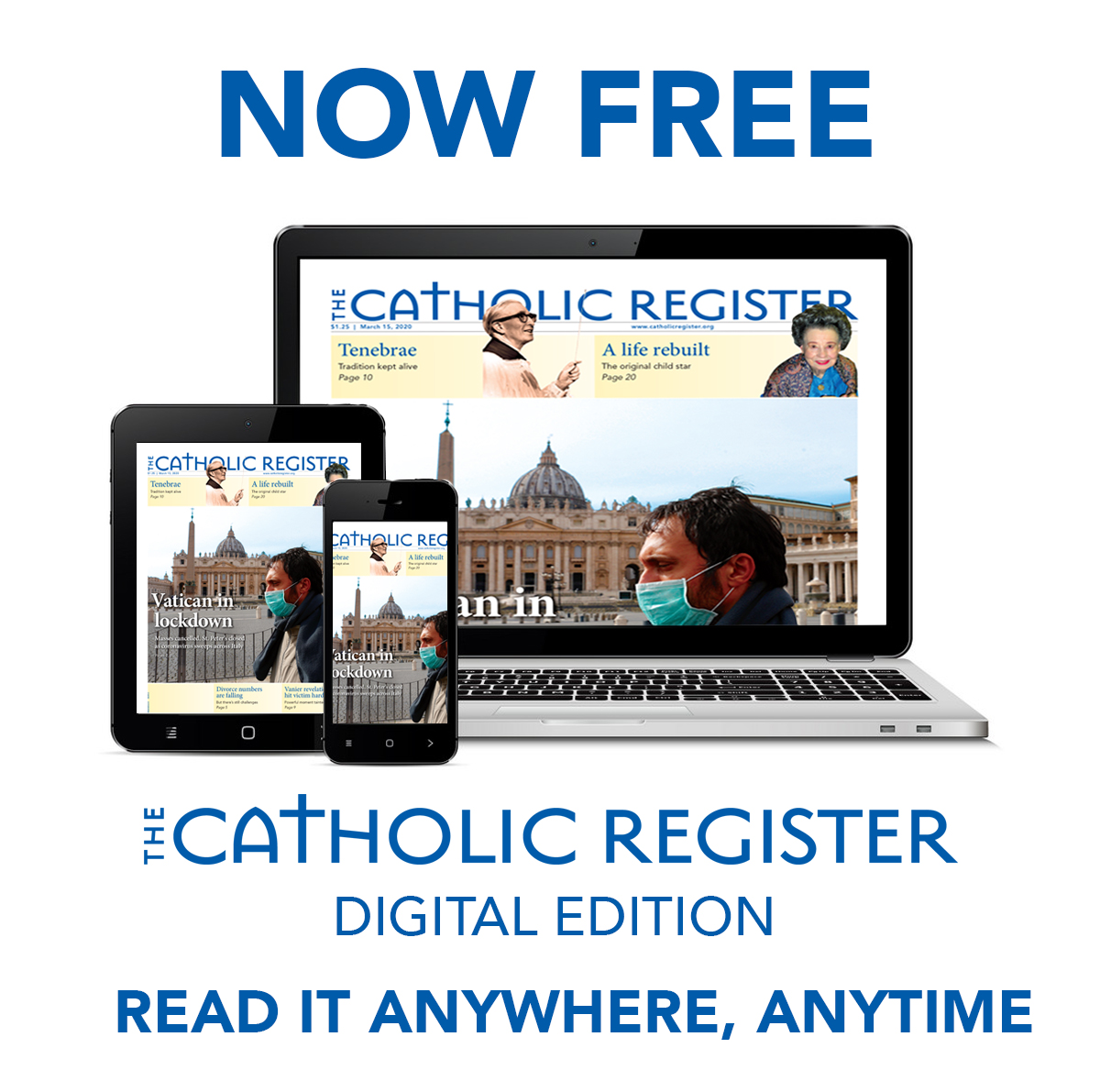 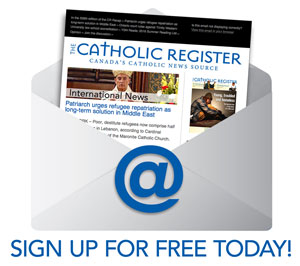 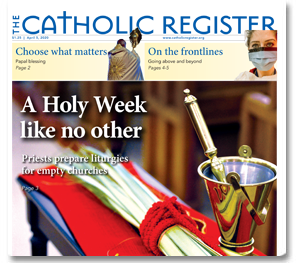 Courtesy of Salt and Light Television