Taino people Media Print Thank you for your feedback

Taino, Arawakan-speaking people who at the time of Christopher Columbus’s exploration inhabited what are now Cuba, Jamaica, Hispaniola (Haiti and the Dominican Republic), Puerto Rico, and the Virgin Islands. Once the most numerous indigenous people of the Caribbean, the Taino may have numbered one or two million at the time of the Spanish conquest in the late 15th century. They had long been on the defensive against the aggressive Carib people, who had conquered the Lesser Antilles to the east. 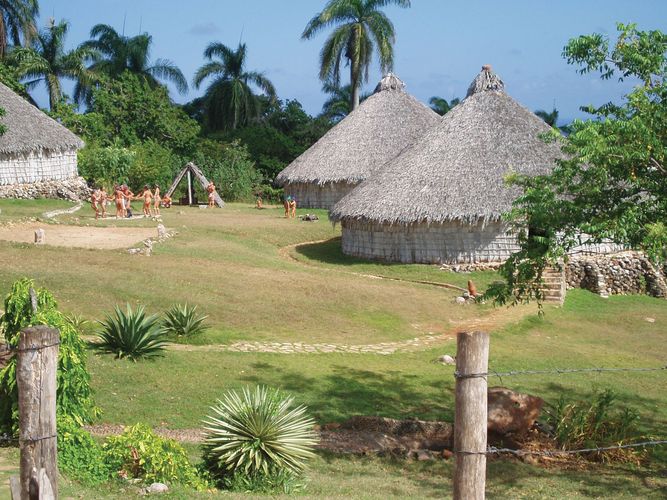 When they were first encountered by Europeans, the Taino practiced a high-yielding form of shifting agriculture to grow their staple foods, cassava and yams. They would burn the forest or scrub and then heap the ashes and soil into mounds that could be easily planted, tended, and irrigated. Corn (maize), beans, squash, tobacco, peanuts (groundnuts), and peppers were also grown, and wild plants were gathered. Birds, lizards, and small animals were hunted for food, the only domesticated animals being dogs and, occasionally, parrots used to decoy wild birds within range of hunters. Fish and shellfish were another important food source.

Traditional Taino settlements ranged from small family compounds to groups of 3,000 people. Houses were built of logs and poles with thatched roofs. Men wore loincloths and women wore aprons of cotton or palm fibres. Both sexes painted themselves on special occasions, and they wore earrings, nose rings, and necklaces, which were sometimes made of gold. The Taino also made pottery, baskets, and implements of stone and wood. A favourite form of recreation was a ball game played on rectangular courts. The Taino had an elaborate system of religious beliefs and rituals that involved the worship of spirits (zemis) by means of carved representations. They also had a complex social order, with a government of hereditary chiefs and subchiefs and classes of nobles, commoners, and slaves.

The Taino were easily conquered by the Spaniards beginning in 1493. Enslavement, starvation, and disease reduced them to a few thousand by 1520 and to near extinction by 1550. Those who survived mixed with Spaniards, Africans, and others. Taino culture was largely wiped out, although several groups claiming Taino descent gained visibility in the late 20th century, notably in Cuba, Puerto Rico, and the U.S. state of Florida. In 1998 the United Confederation of Taino People, which characterizes itself as an “Inter-Tribal authority,” was created as an umbrella organization for the affirmation and restoration of Taino culture, language, and religion. Whereas the Taino are not officially recognized as a group by any governments, those who consider themselves Taino claim the right to self-determination.

Get exclusive access to content from our 1768 First Edition with your subscription. Subscribe today
The Editors of Encyclopaedia Britannica This article was most recently revised and updated by Jeff Wallenfeldt, Manager, Geography and History.