Port-au-Prince, capital, chief port, and commercial centre of the West Indian republic of Haiti. It is situated on a magnificent bay at the apex of the Gulf of Gonâve (Gonaïves), which is protected from the open sea by the island of La Gonâve. The city was laid out in a grid pattern in 1749 by the French and called L’Hôpital. It has suffered frequently from fires, civil strife, and earthquakes. Quakes in 1751 and 1770 destroyed much of the city. In January 2010 another powerful earthquake, of magnitude 7.0, struck; its epicentre was southwest of the city, and it devastated Port-au-Prince and the surrounding region. Hundreds of thousands were killed or injured, and large swathes of the city were reduced to rubble. 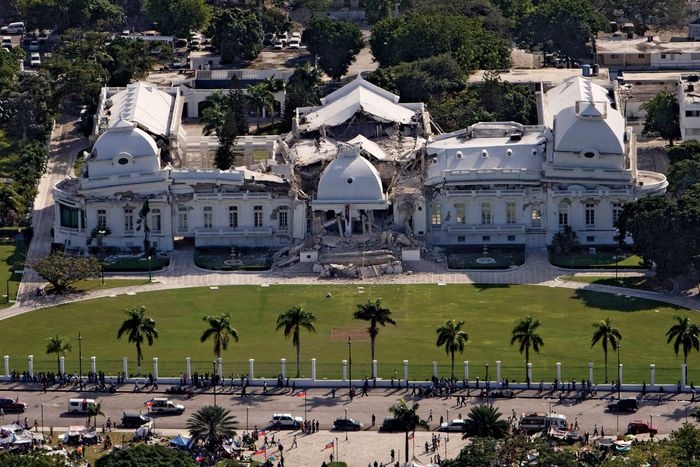 The damaged National Palace in Port-au-Prince, Haiti, after the earthquake that occurred on Jan. 12, 2010.Logan Abassi—Minustah/Getty Images

Port-au-Prince replaced Cap-Haïtien as the capital of the old French colony Saint-Domingue in 1770 and was retained as the capital of the newly independent country of Haiti in 1804. In 1807 its port was opened to foreign commerce. Sanitary conditions were improved during U.S. occupation (1915–34). The city’s bicentennial was commemorated in 1949 by an international exposition, the site of which is a palm-fronted promenade, now neglected and run-down.

Unemployment is extremely high. There are some foreign-owned factories and assembly plants in the vicinity of the airport, but, otherwise, employment is mostly to be found in the informal sector, in such activities as cooking, shelling peanuts, and selling paintings and other handicrafts. There is air service to the United States, Canada, and France as well as to other Caribbean islands; however, the area surrounding the capital’s international airport has been the site of violence, some of it caused by United Nations peacekeeping force conflicts with armed gang members. The level of tourism fluctuates with political conditions and has been in decline since the civil unrest and economic crisis of the 1980s. Tourism was also affected by the AIDS scare of the early 1980s, in which Haiti was erroneously identified as the place of origin for the disease. By the late 1980s AIDS researchers had found that tourists had brought the disease to Haiti in the 1970s, though extreme poverty and lack of education still contribute to the spread of HIV in Port-au-Prince and throughout Haiti.

The Place du Champ-de-Mars—the site of a number of historically notable structures in the centre of the city—was hit hard by the 2010 earthquake. The National Palace (rebuilt in 1918) collapsed. Other notable landmarks include the Cathedral of Notre Dame and the adjacent colonial cathedral, both of which also collapsed in the 2010 earthquake, and the National Archives, National Library, and National Museum. 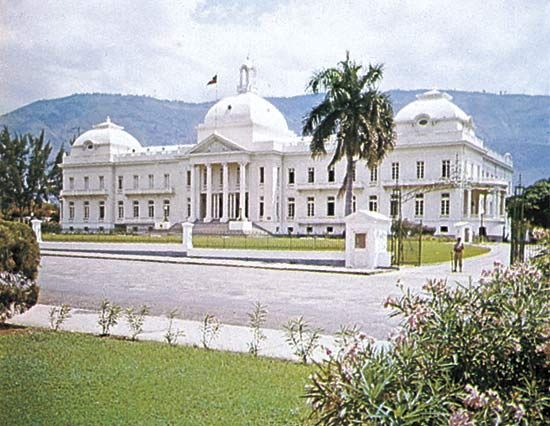 The National Palace in Port-au-Prince, Haiti, prior to its damage in a January 2010 earthquake and its subsequent demolition.Arthur Griffin/Encyclopædia Britannica, Inc. Get exclusive access to content from our 1768 First Edition with your subscription. Subscribe today

Port-au-Prince is the centre of the political and intellectual life of the country and is the seat of the State University of Haiti (established in 1920). A traditionally picturesque site has been the brash and bustling Iron Market, with its mostly female vendors. Recreation for the privileged centres around European-style social clubs, but the house of the local voodoo priest is still the heart of the urban poor community.

Most of the Haitian elite (nearly all mulatto or nonblacks) live in the suburb of Pétionville in the 1,000–1,500-foot- (300–450-metre-) high hills southeast of Port-au-Prince. Haiti’s small but politically important black middle class is also concentrated around Port-au-Prince. Squalor and neglect surround most of the black urban working class even more than it does the subsistence farmer, and constant migration from the countryside continues to exacerbate their misery. Slums such as Cité Soleil are among the largest and most deprived in the Americas. Pop. (2009 est.) city, 875,978; metropolitan area, 2,296,386.

This article was most recently revised and updated by Lorraine Murray, Associate Editor.