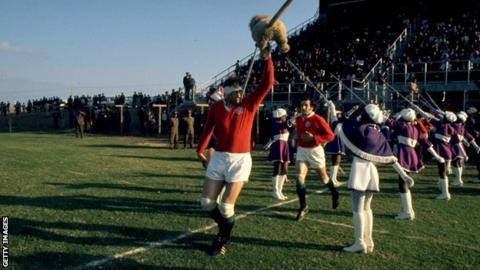 The County Antrim native, who went on five Lions tours, is widely regarded as one of the great players and leaders of his era.

There is an OBE for Northern Ireland and Manchester United goalkeeping legend Harry Gregg.

There are also three Northern Ireland recipients of the British Empire Medal (BEM).

McBride, who grew up on his family's farm in Moneyglass, was named in all five tours for the then British Lions which took place during his international career which spanned between 1962 and 1975.

The lock won 63 Ireland caps and famously led the Lions to a series win in Apartheid South Africa in 1974.

Gregg, who made 210 appearances for United, is one of two players from famous Busby Babes squad still alive, along with Sir Bobby Charlton.

The goalkeeper is one of the heroes of the tragic Munich Air Disaster in which 23 people were killed in a plane crash.

Gregg's response immediately after the crash included rescuing a young baby from the plane in addition to finding Manchester United team-mates Charlton and Jackie Blanchflower alive.

Gregg made 25 appearances for Northern Ireland between 1954 and 1964

McAuley, 39, capped 79 times for Northern Ireland, is a firm fan favourite and continues to play at international level having moved to Rangers in summer.

Crawford becomes an MBE following 60 years of service to Dungannon FC first as a player and later as president. He also held the role of Ulster Branch President and spent time at the helm of the IRFU after 13 years on the committee.

Longstanding Crusaders FC boss Stephen Baxter has been named as a BEM recipient along with Anthony Clarke, who receives the honour for services to Badminton in Northern Ireland, and Daniel Gallagher for services to football and community cohesion in Sion Mills.

'Maverick Fury one fight from immortality'

Read more on 'Maverick Fury one fight from immortality'

Why Man Utd fans have a new hero - Crouch on Fernandes