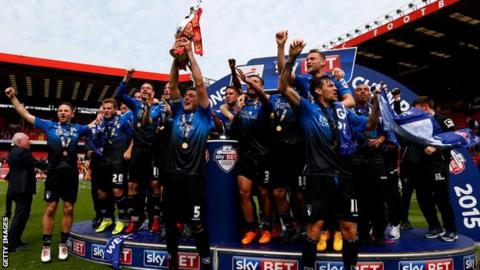 Football League clubs will now face a 12-point deduction for going into administration, an increase on the current penalty of 10 points.

The sanction has been increased after the Football League agreed a change to its insolvency policy at its AGM.

Within 21 days of their appointment, administrators will also need to meet with the supporters' trust and give them the chance to bid for the club.

It has been two seasons since the last Football League administration.

The club concerned were Aldershot Town in May 2013 following their relegation from League Two.

Football League chief executive Shaun Harvey said: "The use of Financial Fair Play regulations in all three divisions, the requirement for new owners to demonstrate the source and sufficiency of their funding and the ongoing monitoring of club's tax affairs have helped us bring more stability to club finances.

"However, we cannot be complacent and this is the right time to strengthen our insolvency policy and also refine its effects, so that it is as fair as it can possibly be for clubs, creditors and supporters."

Covid impact 'might force me to give up sport'

Inside the Champions League bubble

Read more on Inside the Champions League bubble

Related to this story