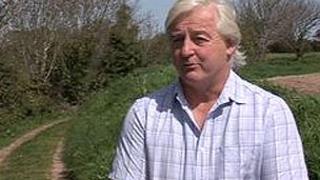 Image caption John Le Maistre will be sworn in on Friday

The people of Grouville have voted for a new "father of the parish" after Wednesday's by-election.

His opponent for the office was Grouville Chef de Police, Charles Dix, who received 442 votes.

As Grouville Constable, Mr Le Maistre will be responsible for the running of the parish and will have a seat in the States of Jersey assembly.

Constable-elect Le Maistre will be sworn in at the Jersey Royal Court on Friday.

Jurat Stan Le Cornu was responsible for the poll and said it was a good, traditional parish election.

He said: "It was a very nice occasion, it was a historic occasion as constables tend to stay in their seat for a while once they are in and so we don't get a contested election very often."

They were standing for the seat made vacant after the death of Dan Murphy who died in July, aged 73, after an illness.

Constable Murphy served his parish for 10 years, as well as being the vice-chairman of the Constables Committee.

Mr Le Maistre will serve as constable until the general election in October 2014.

Demonstrations sparked by the death of George Floyd take place in towns and cities across the UK.

Back to school: 'You can throw a ball but can't catch one'

Are you allowed to protest during lockdown?

How the NFL made its U-turn on kneeling

The actress talks fame, Weinstein and the future