Peter Pan sculpture to be auctioned 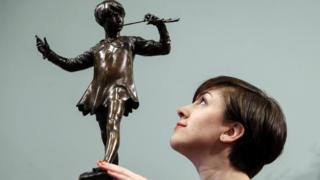 A rare bronze sculpture of children's favourite Peter Pan is expected to fetch up to £30,000 at auction.

The figure is a smaller version of the statue which appeared one night in London's Kensington Gardens in 1912.

The anonymous seller said: "We are sorry to part with this beautiful statue - it has been in my family for nearly 100 years.

"We hope that it will be as loved by its new owners as much as it was by us."

Barrie, who was born in Kirriemuir, Angus, first used Peter Pan as a character in The Little White Bird (1902) and returned to him in a later stage play before expanding the story to produce the 1911 novel Peter and Wendy.

The original statue appeared in public with an announcement in The Times newspaper which read: "There is a surprise in store for the children who go to Kensington Gardens to feed the ducks in the Serpentine this morning...

"A May-day gift by Mr J M Barrie, a figure of Peter Pan blowing his pipe on the stump of a tree, with fairies and mice and squirrels all around.

"It is the work of Sir George Frampton and the bronze figure of the boy who would never grow up is delightfully conceived."

John Mackie, head of decorative arts at Lyon and Turnbull, said: "This famous statue is held in great affection all over the world - it is the iconic image of the boy who never grew up and a very beautiful work of art."

A house in Dumfries which helped inspire the Peter Pan story is to be converted into a national centre for children's literature.

Barrie moved to Dumfries in 1873 at the age of 13 and credited the "enchanted land" at Moat Brae, where he played, as being the basis for the story.

At one point the house was facing demolition but finance has come from the Heritage Lottery Fund, Creative Scotland and Dumfries and Galloway Council.

The conversion is due to be completed in 2018.

Ministers urge people to keep up coronavirus distancing as the PM begins his recovery in hospital.

The people fighting viral fakes from their sofas

Love and dating during coronavirus

Doctor: 'The most urgent research race in living memory'

It looked so good for Sanders. What went wrong?

Seven people stuck in a lift. Then one coughs...

'I'm happy Cadet finally got recognition before he died'

Passover, Ramadan and Easter: How to celebrate without leaving home

Quiz of the week: On the loss of a Bond girl, and more

Laura Marling: 'I was in danger of being bored of myself'

Nine tips for couples living together