How English evolved into a global language - BBC News

How English evolved into a global language 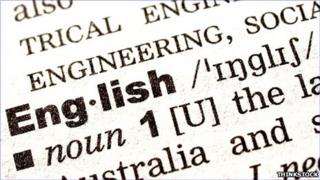 As the British Library charts the evolution of English in a new major exhibition, author Michael Rosen gives a brief history of a language that has grown to world domination with phrases such as "cool" and "go to it".

The need for an international language has always existed. In the past it was about religion and intellectual debate. With the technologies of today, it's about communicating with others anywhere in the world in a matter of moments.

Two events, separated by nearly 400 years, show how this need has always been present.

Firstly, sitting in front of me I have a copy of the celebrated book Utopia, by Sir Thomas More. This particular edition is published in 1629 in Amsterdam, not in English, not in Dutch, but in Latin.

The second event was a talk I recently had with a German scientist. He said that he knew of scientific conferences taking place in Germany, where all the people attending were German and yet the conference was conducted in English.

The Latin of this edition of Utopia was a written code, though its most accomplished users could adopt it to conduct intellectual and religious debate.

The technologies of telephones, radio, TV, records, CDs, mobile phones and the internet have enabled most people in the world to get access to each other's language in a matter of moments

During the previous 1,300 years it had been the main language of the Western Christian tradition - the language of prayer, hymn, sacred texts and religious debate. It was also the language with which Renaissance scientists spoke to each other.

However, this hold on religious and intellectual minds was broken by the rise of national cultures. The peoples of the countries where Latin was being used, spoke their own languages and dialects.

Once these came to be written down, more and more people started to ask their churches and religious authorities to speak, write and deliver some, most, or all religion in those local languages.

Two of the most famous texts to come out of this was the King James Bible (soon to celebrate its 400th birthday) and Martin Luther's German Bible, from a little less than 100 years earlier than the King James.

Part of this process to establish the power and influence of these local languages was the effort to produce standardised forms for them, so that teachers, merchants, lawyers, ministers of religion and politicians could write to and for each other in ways that were instantly comprehensible.

As a result, standardised English writing became a powerful tool in the hands of government, church and school in asking the peoples of the British Isles to see themselves as one.

But nation went on speaking to nation in peace, war, trade, migration, religion and the world of ideas. A lot of effort went into the production of foreign language dictionaries, grammars and translations of important, or the most interesting books.

Throughout this time one of the most significant events in the history of world languages was happening: English-speaking soldiers, sailors and colonisers were travelling to, and settling in countries right the way across the globe.

Only in the places that either kept their independence or where the Spanish, Portuguese, French, and Dutch had done the same, was English not spoken.

If the 20th Century can be described as a savage flowering of the demands of nationalism - including pride in national languages and literature - it also saw the rise of utopian dreams about international co-operation as seen first by the League of Nations and then the United Nations.

However, in these places it wasn't so much that nation spoke unto nation, as interpreter spoke unto interpreter. In response, inventors of international languages tried to bring about world peace with their inventions, the most famous of which is Esperanto. It didn't catch on sufficiently for the world's politicians to need or want to learn it.

Slowly, another international language emerged, spoken by diplomats, scientists, artists, business people and many more. Benefiting from the legacy of the British Empire, and the rise in influence of the most powerful member of that Empire - the USA - English (or kinds of English) is being spoken all over the globe.

Or listen to Word of Mouth on the iPlayer

In truth, they speak what the linguist David Crystal calls "Englishes", though some ways of talking are what have been called "creoles", "pidgins" and "patois". I was watching an Austrian pop music channel recently and the comments and ads were in an Anglo-German Creole whose core was German, but which was full of "go to it", "cool", "be there" and the like.

Most of this has gone on without direction from governments. The technologies of telephones, radio, TV, records, CDs, mobile phones and the internet have enabled most people in the world to get access to each other's language in a matter of moments.

Through these channels, millions of young people across the world have grown to like the sounds produced by English-speaking bands. Sub-titled films from Hollywood have given millions of non-English speakers the chance to imitate James Cagney, Marilyn Monroe, Robert De Niro and Harrison Ford.

But will it last? Perhaps in 100 years, the world's population will have come to love the subtleties and beauty of one or both of the standard Chinese languages - Mandarin and Cantonese. We just don't know.

There are calls for a review and free appeals as concern grows over "volatility" in this year's results.

Can I challenge my A-level results? And other questions

'Why I stopped hiding my scars'

What Europe's cities are doing to handle heatwaves

The young people saving money without a bank

The millions being made from cardboard theft

How can I find a new job?

Four ways it may get harder for first-time buyers

How will the world vaccinate seven billion people?

The bad stuff that makes you feel good

Comedians spin the Wheel of Misfortune

Full article The bad stuff that makes you feel good