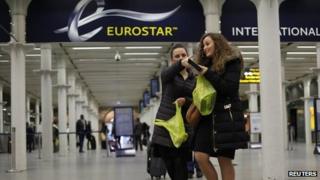 The UK government has announced that it is selling its 40% stake in the cross-Channel train operator Eurostar to an Anglo-Canadian consortium for £757.1m.

Under the deal, Patina Rail LLP will acquire the UK Treasury's entire share of the high-speed rail service.

The French and Belgian national railways continue to own the rest.UK government sells Eurostar stake

The intention to sell was first set out in 2013, in the Autumn Statement and National Infrastructure Plan.

Chancellor George Osborne said the stake had fetched "far more than people expected we'd be able to sell it for".

He added: "This is a very good deal - it means we can cut the national debt, it means we can invest in our national infrastructure and it's fantastic value for British taxpayers. It's all part of our long-term plan to secure Britain's future."

Eurostar's never been the runaway success they were predicting twenty years ago.

In 1996, the official prediction was that the trains would be carrying 21.4 million passengers a year by 2004.

The actual figure was 7.3 million.

Low cost airlines is what happened (as well as cheaper ferries, the recession, the London bombings, foot and mouth).

Even today, it's only just broken the ten million passenger mark.

Still, it clearly looks a good buy for these two pension funds, one of which handles the BT pension.

Why? Well passenger numbers have been rising every year for a decade and business travel is doing well. There are new trains coming later this year, and more destinations too. And it's been making a steady profit for several years.

The consortium is made up of two companies: Canadian-based Caisse de Depot et Placement du Quebec (CDPQ) and the UK's Hermes Infrastructure. When the deal goes through, they will own 30% and 10% of Eurostar respectively.

Since then, Eurostar has carried more than 150 million passengers, and more than 10 million in 2013 alone. Numbers have risen every year for the past 10.

In June 2014, the UK government's holding was transferred from LCR to the Treasury.

Rail unions have attacked the sale.

Manuel Cortes, leader of the TSSA rail union, said: "George Osborne, because of his outdated belief in unvarnished Thatcherism, is once again selling off the family silver for short-term financial gain.

"The reason that France and Belgium already own the majority stake in Eurostar is that they believe in running a publicly owned railway for the benefit of everybody.

Boris Johnson is "in very good hands", says Foreign Secretary Dominic Raab, who is deputising for the PM.

Power is no protection from harm

What is an intensive care unit?

A visual guide to the world in lockdown

Getting vital supplies to new mums amid lockdown

Who's in charge if a PM is incapacitated?

The shop where you can still buy huge bags of pasta

Need a pick me up?

Full article Need a pick me up?