The American College of Toxicology is an international body of research and regulatory scientists dedicated to a safer global community.

Toxicologists are experts in the science of toxicology, the study of detrimental effects of substances on biological systems.

ACT is committed to protecting the health and safety of our members and our global society, and we are closely monitoring the situation surrounding COVID-19 pandemic. ACT will announce any decisions to cancel or postpone its educational courses or programs in response to the pandemic. During these unprecedented times, we remain dedicated to our mission to educate, lead, and serve and are working tirelessly to explore available options to continue to provide the high-quality educational initiatives for which the College is known.

Coniine is found in poison hemlock (Conium maculatum) and the yellow pitcher plant (Sarracenia flava). It is a poisonous alkaloid that contributes to the fetid smell of those plants, famously used to put Socrates to death in 399 BC. Less than 0.2g is fatal to humans and the poison is toxic to all classes of livestock. This neurotoxin causes death by respiratory paralysis. First synthesized by Albert Ladenburg in 1886, it was the first alkaloid to be synthesized. Nicotine

content has slowly increased in American-brand cigarettes over the years. This is a potent alkaloid made in the roots and accumulated in the leaves of plants of the nightshade family (Solanaceae). The presence of nicotine deters herbivores. Thus nicotine was used as an insecticide in the past and currently versions such as imidacloprid are used for this purpose.

Nicotine acts as a nicotinic acetylcholine receptor agonist. In smaller doses it acts as a stimulant. One cigarette yields about 1 mg of absorbed nicotine. High amounts (30–60 mg) can be fatal. The American Heart Association labels nicotine addiction as one of the hardest addictions to break. The stimulant effect contributes to the formation and continuation of the smoking habit. Acetylcholine

is produced by nerve cells and acts as neurotransmitter in both the peripheral and central nervous system of many organisms, including humans. In the peripheral nervous system this chemical stimulates increased activity of skeletal muscle. However, in cardiac tissue this neurotransmitter inhibits the action of heart muscle thus lowering heart rate. Acetylcholine plays a role in memory, learning, and mood in the central nervous system. Inhibiting the transmission of acetylcholine is one way that toxicants can interfere with normal physiological processes.

Poison Dart Frog is the name of a group of 175 species of frogs (family Dendrobatidae) which are native to Central and South America. These frogs often have brightly colored bodies. The level of toxicity varies considerably from one species to another, and also among the same species found at different location. Many of these species are threatened. They also are called dart frogs because Amerindians used the toxic secretions for four of these species on the tips of blow darts. Aspirin

is an analgesic used to relieve aches and pains, reduce fever, and as an anti-inflammatory. Aspirin also reduces blood clotting through an antiplatelet effect. One of the most widely used drugs, aspirin can cause gastrointestinal bleeding. Also known as acetylsalicylic acid, it was first isolated in 1897 by Felix Hoffmann for the German company Bayer, although abstracts of willow bark, a source of the compound, were used for pain relief by early Egyptians.

is the shorthand for dichlorodiphenyltrichloroethane, an organochlorine insecticide that was first synthesized in 1874. Its insecticidal properties were discovered in 1939 and it was used with great success to kill the insects which transmitted malaria and typhus during the second half of World War II. Subsequently it was determined that accumulation of DDT in the environment had major ecological impact, such as the thinning of the shells of bird eggs which lead to a reduction in hatching success for birds at the top of the food chain.

live in estuaries and marine environments. The family (Tetraodontidae) includes many familiar species, which are called a number of additional names such as puffers, balloonfish, blowfish, and swellfish. These are considered the second most poisonous vertebrates in the world after the golden poison frog. The poison is localized in certain organs such as the liver. Chefs prepare pufferfish as a special delicacy for those who trust their skills preparing the parts that are safe to eat, in Japan (as 河豚, pronounced as fugu), Korea (as bok), and China (as 河豚 hétún).

was introduced in the late 1950s to be used as a sleeping aid, but was then widely distributed for its anti-nausea properties to reduce morning sickness in pregnant women. In 1962 it was withdrawn after it became clear that it is a teratogen, a substance that induces birth defects.

Retinoic Acid The effect of retinoic acid on the development of mouse skeletons. is a constituent of vitamin A (retinol), which is important in growth and development. Retinoic acid is required in all higher animals from fish to humans. During early embryonic development, retinoic acid is produced in a region of the embryo and acts as a signaling molecule that influences the embryonic anterior/posterior axis. When retonic acid is used to treat acne it is very important that the patient avoids pregnancy because of the potential for birth defects. Opium Poppy

produces opium and poppy seeds. The botanical name (Papaver somniferum) means the sleep-bringing poppy in reference to the sedative properties of opiates. Opium is the source of many narcotics, including morphine and its derivative heroin. The alkyloids in opium bind to receptors in the central nervous system and can lead to addiction and increasing tolerance with use.

Asbestos can consist of any of six types of silicate minerals found in rocks and soil. Asbestos is used commercially for insulation and as a fire retardant because of desirable physical properties. Use includes building materials such as roofing shingles, floor tiles, and in heat-resistant fabrics. Asbestos is characterized by the long, thin, fibrous crystals. Prolonged environmental and occupational exposure to asbestos can cause serious illnesses due to inhalation of the fibers, including malignant lung cancer, mesothelioma, and asbestosis (a type of pneumoconiosis). 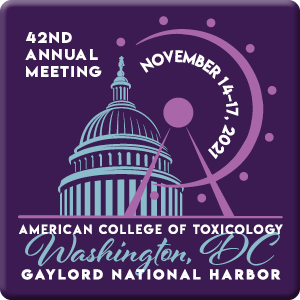 Contribute to the Legacy: Donor form

The American College of Toxicology is a professional organization with a collegial atmosphere. We provide educational opportunities through meetings, courses, and webinars and publish International Journal of Toxicology. Our audience is primarily toxicologists working within industry, pharmaceutical and biotech companies, government regulatory agencies, or as consultants. Learn more about ACT and how to join.

International Journal of Toxicology (IJT) is the official journal of the American College of Toxicology and provides high quality timely peer-reviewed, multidisciplinary articles and incisive reviews important to toxicologists. Topics include contemporary issues in toxicology, safety assessments, novel approaches to toxicological testing, mechanisms of toxicity, biomarkers, and risk assessment. IJT is published six times a year and Members receive the publication as part of their membership as well as access to the IJT archives. READ MORE Good Stuff

The American College of Toxicology is your connection to programs and resources. Toxicology is a diverse field that can lead to many different career paths. Get a sampling of a few of these career paths as well as a sense of what the actual earning power may be. Explore links to sites with information on toxicology as well as to other organizations that impact this discipline. Take advantage of some unique perspectives on toxicology offered by the ACT. Also look into how you might find an opportunity for your expression in the American College of Toxicology. READ MORE Select to change view 11190 Sunrise Valley Drive, Suite 300, Reston, Virginia 20191
Tel: 703.547.0875 | Fax: 703.438.3113 | Email: [email protected]

Copyright © 2020 American College of Toxicology. All rights reserved.
You may view the ACT Privacy Policy, provide consent to ACT to email you communications, or unsubscribe to stop receiving further ACT communication. Privacy Policy | Provide Consent | Unsubscribe ACT Mission Statement: To educate, lead, and serve professionals in toxicology and related disciplines by promoting the exchange of information and perspectives on applied toxicology and safety assessment. Search