From Wikispecies Jump to navigation Jump to search


The free species directory that anyone can edit.

It covers Animalia, Plantae, Fungi, Bacteria, Archaea, Protista and all other forms of life.

Wikispecies is free, because life is in the public domain!

You can also check us out on Twitter: @Wikispecies
or use the Android app sponsored by Wikimedia.

We also have an IRC Channel #wikispeciesconnect 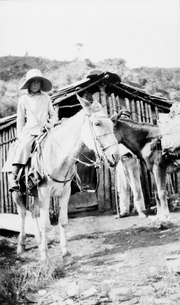 Mary Agnes Chase, née Merrill, was an American botanist who worked at the U.S. Department of Agriculture and the Smithsonian Institution. She is considered one of the world's outstanding agrostologists and is known for her work on the study of grasses, and also for her work as a suffragist. Chase was born in Iroquois County, Illinois and held no formal education beyond grammar school. That aside, she made significant contributions to the field of botany, authored over 70 scientific publications, and was conferred with an honorary doctorate in science from the University of Illinois. She specialized in the study of grasses and conducted extensive field work in North- as well as and South America. Her Smithsonian Field Books collection from 1897 to 1959 is archived in the Smithsonian Institution Archives.

In 1901, Chase became a botanical assistant at the Field Museum of Natural History under Charles Frederick Millspaugh, where her work was featured in two museum publications: Plantae Utowanae (1900) and Plantae Yucatanae (1904). Two years later, Chase joined the U.S. Department of Agriculture (USDA) as a botanical illustrator and eventually became a scientific assistant in systematic agrostology (1907), assistant botanist (1923), and associate botanist (1925), all under Albert Spear Hitchcock. Chase worked with Hitchcock for almost twenty years, collaborating closely and also publishing, for instance The North American Species of Panicum (1910).

Following Hitchcock's death in 1936, Chase succeeded him to become senior botanist in charge of systematic agrostology and custodian of the Section of Grasses, Division of Plants at the United States National Museum (USNM). Chase retired from the USDA in 1939, but continued her work as custodian of the USNM grass herbarium until her death in 1963. She was an Honorary Fellow of the Smithsonian Institution (1959) and Fellow of the Linnean Society of London (1961). Agnesia is named in her honour (a monotypic genus of herbaceous South American bamboo in the grass family).

Chase experienced discrimination based on her gender in the scientific field, for example, being excluded from expeditions to Panama in 1911 and 1912 because the expedition's benefactors feared the presence of women researchers would distract men. During World War I, Chase marched with Alice Paul and was jailed several times for her activities. In 1918, she was arrested at the Silent Sentinels rally picketing the White House; she refused bail and was held for 10 days, where she instigated a hunger-strike and was force-fed. The USDA accused her of "conduct unbecoming a government employee," but Hitchcock helped her keep her job. Chase was also an active member of the National Association for the Advancement of Colored People (NAACP).

Species of the month 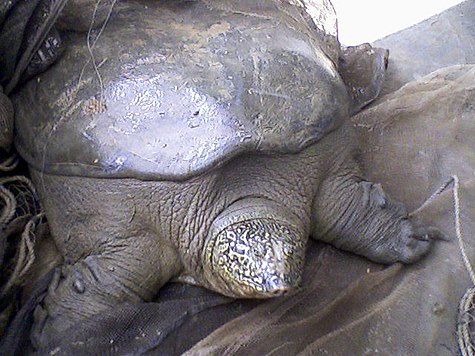 Some facts about this turtle:

Distribution: The Yangtze giant softshell turtle has been known to inhabit the Yangtze River and Lake Tai, situated on the border of Jiangsu and Zhejiang Provinces, in eastern China, and Gejiu, Yuanyang, Jianshui and Honghe in Yunnan Province in southern China.
Protection status: Critically Edangered.
Etymology: Named after English biologist Robert Swinhoe who sent the first specimens to the author

This critically endangered species holds the title of being the largest freshwater turtle in the world. The Yangtze giant softshell turtle is on the brink of extinction due to habitat loss, hunting for subsistence and local consumption, and the use of the carapace and bones in alternative medicine. Skulls are often kept as trophies. Conservation efforts are concentrated on breeding captive turtles in China and searching for live specimens in the wild. An agreement was made to transfer the only known remaining female specimen located at the Changsha Zoo to the Suzhou Zoo to breed with the male specimen there. Also, efforts are being made to improve conditions for breeding at both the Suzhou Zoo and Western Temple in Suzhou.

Wikispecies in other languages

Wikispecies is hosted by the non-profit Wikimedia Foundation, along with several other multilingual and free-content projects:

Meta-Wiki
Coordination of all Wikimedia projects