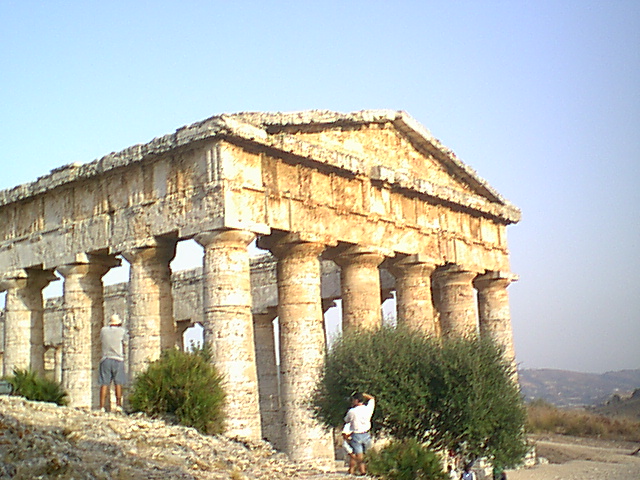 The population of Segesta were mixed Elymian and Greek Ionic. The Elymian people in Segesta were soon hellenized, taking up the greek way of life.

Segesta was in eternal conflict with Selinunte, which probably tried to assure itself a port on the Tyrrhenian Sea. The first clashes were in 580-576 BCE, and again in 454 BCE, but later the conflict would have repercussions for all of Sicily.

In 415 BCE Segesta asked Athens for help against Selinunte, leading to a disastrous athenian expedition in Sicily (415-413 BCE). Later they asked Carthago for help, leading to the total destruction of the city of Selinunte by the hands of Carthago. Segesta remained an ally of Carthago, it was besieged by Dionysos of Syracuse in 397 BCE, and it was destroyed by Agatocles in 307 BCE, but recovered.

In 276 BCE the city was allied with Pyrrhus, but changed side in 260 BCE when it surrendered to the Romans. The city was not punished by the Romans for its long alliance with Carthago, but due to the mythical common origin of the Romans and the Elymians (both descendants of refugees from Troy) it was granted the state of a “free and immune” city.

In 104 BCE the slave rebellion lead by Athenion started in Segesta.

Little is known about the city under roman rule, but it is probable that the population gradually moved to the port city of Castellammare due to the better trading opportunities.

The city was finally destroyed by the Vandals. It was never resettled.

The ruins of the city is located on the top of Monte Bàrbaro at 305m above the sea. The city was protected by steep slopes on several sides and by walls on the more gentle slope towards the temple.

From the hill top there is a splendid view over the valley towards the Gulf of Castellamare. The city controlled several major road between the coast to the north and the hinterland.

Very little is known about the city plan. Aerial photography indicate a regular city plan, build in part on terraces to overcome the natural sloping terrain. The current remains might be from the reconstruction after the destruction of the city by Agatocles.

The ruins of the city can be visited. The city is most famous for its greek theatre which is within the city limit, and for the marvellous doric temple just outsite the perimeter.

There are 31 photos in this gallery.