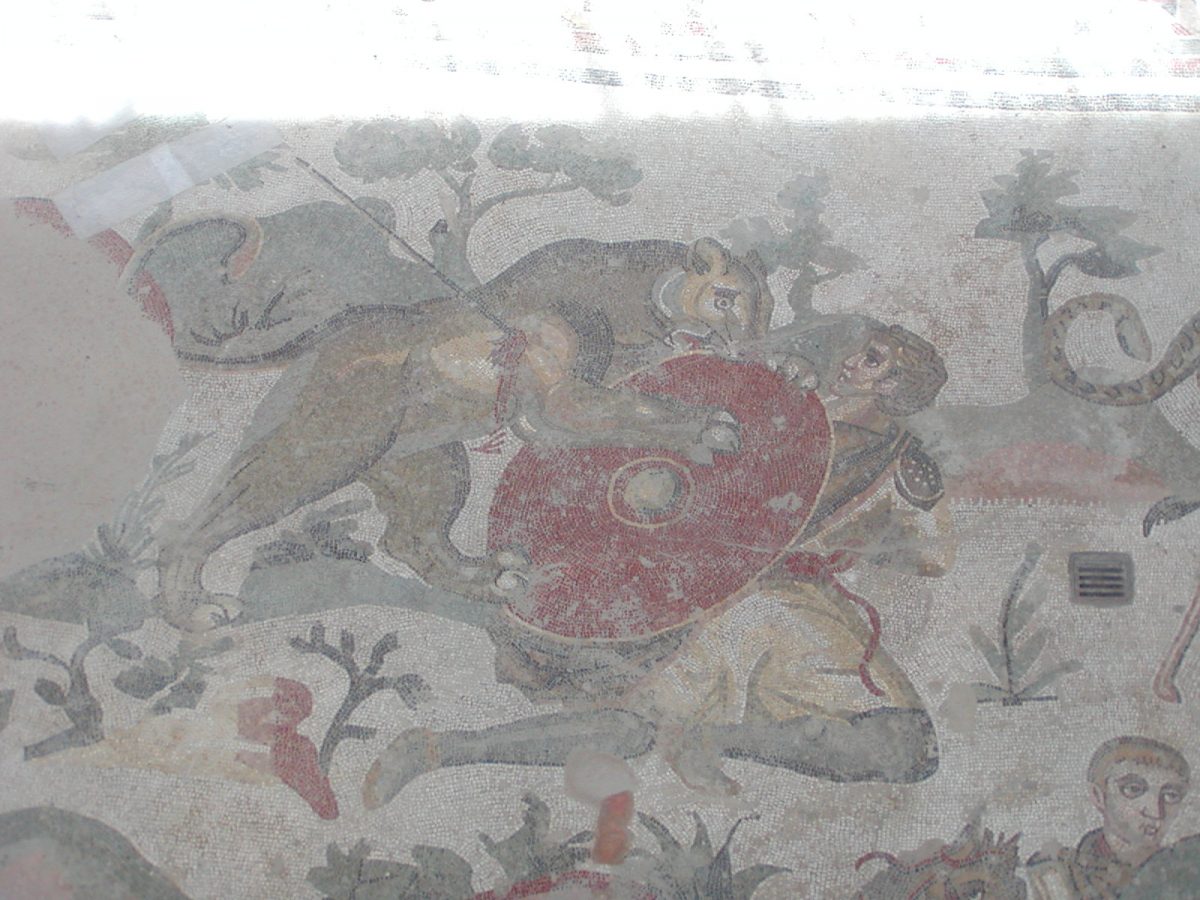 Corridor of the Great Hunt

The Corridor of the Great Hunt is a long corridor in the Villa Romana del Casale, depicting the capture of live animals for the circus in Rome.

The Corridor of the Great Hunt is a long corridor in the Villa Romana del Casale. It is located between the peristyle on the west, and the Vestibule of Polyphemus, the Great Basilica and the Atrium of the Fishing Cupids on the east. 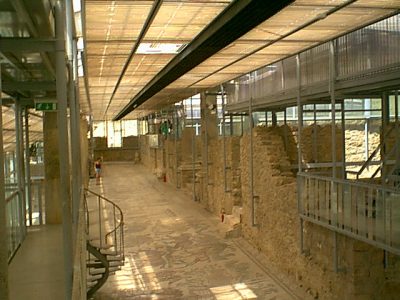 The Great Corridor with the visitors platforms

The mosaic in the corridor is very complex. It is a depiction of the capture of live wild beast in the most distant parts of the empire and their subsequent transport by ship to Rome for the venationes, fights involving wild animals that were held in Rome in the Colosseum and sometimes in the Circus Maximus and in other arenas.

The disposition of the mosaic is centred in front of the entrance to the Great Basilica where the animals arrive in Rome. The hunts start in the extreme ends of the corridor, where there are also images of places at the extremes of the Roman Empire, and the animals are transported towards the centre, where Rome is located. Underway the animals are loaded on ships to be disembarked in Rome.

Below is a drawing of the complete mosaic – use the scrollbar below it to move horizontally.

The mosaic in the apse at the northern end of the corridor is very damaged, but a central female figure is visible and parts of two ferocious animals at her sides. This might be an allegory of Mauritania, a representation of the western extreme of the known world.

In the corridor the first scene is a hunt for leopard. The hunters form a wall with their shields while others try to attract the animals with the hide of kid as bait to allow the men with shields to surround the animals, that are to be taken alive. The following scene, which is much damaged, is of the capture of wild horses by hunters on horseback. Above two running antelopes. Next is a scene of a lion hunt. The hunters are on foot, armed with spear and shield. In the lower part a hunter has fallen and a lion is approaching. Another hunter behind him keeps the lion away with his lance. Above these there is a third hunter protecting himself from a crouching lion with the shield. The background includes a house and a garden, indicating that the scene is located in a civilised area. The earlier scenes had a ‘wilder’ background.

Just in front of the first entrance to the corridor from the peristyle is a scene with the transport of the animals in a cart that is drawn by two oxen. A man is pushing the cart, while another man on horseback holding a shield oversee the work. Behind this scene a leopard has just killed an antelope, and another antelope is escaping the opposite direction. Nearby a small leopard is trying to pull down a third antelope. The background include a portico and houses, hinting at a still more civilised setting. 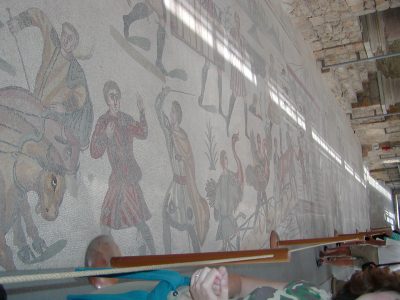 Detail of the mosaic

Finally the animals arrive at the coast. An overseer is hitting a slave or worker. Their different social standing can be seen clearly from their clothes. The overseer is clad as a high ranking military officer of the late roman period. Then two slaves are leading a pair of ostriches up the ramp to board the ship. In front of them two men a dragging an antelope on board, passing it on to a man on the ship. The ship is laden with two huge crates and two seamen are preparing it for departure. The sea is calm and abounds with fish. Above other animals a brought to the ship. Two slaves carry a large box on a pole, guarded by an overseer, while two others carry a wild boar tied with a net to a pole. In the background there is a city.

The same ship is then seen being unloaded in Rome. This is part of the central scene, located just in front of the middle stairway from the peristyle and the entrance to the Great Basilica. On the the left four slaves are unloading a huge box from the ship and another is bringing an ostrich down the ramp. Above them is an elephant, but that part is a bit damaged. From another ship to the right two persons are pushing and dragging an animal off the ship. Some lacunae cover part of the animal, but it could be a tiger or a lion.

In the upper centre is a group of three men. The man in the centre is dressed in the style of the military elite of the late empire, consisting of trousers and tunic covered by a decorated cloak tied over the right shoulder, a small, round leather cap and a long stick with a mushroom like handle. 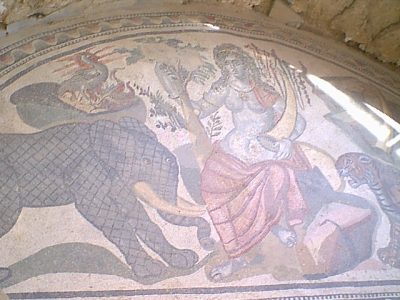 An allegory of India or Arabia

The other half the hunting scenes starts at the southern end of the corridor. The mosaic in the apse is an allegory of either India or Arabia. In the centre is a dark skinned woman sitting on a rock and holding an elephants tusk. She has a tiger and another elephants tusk at one side, and an elephant to the other. Behind the elephant is a depiction of the mythic bird phoenix rising from the ashes of its burning nest. This mosaic represents the oriental extreme of the known world, opposite Mauritania.

The first scenes remains in the realm of myth and are probably a reflection of the Roman beliefs about India. First there is a griffin on top of a box with a human bait inside. Further upward to the left are two soldiers, one with his spear raised ready to hurl against the griffin. Above the griffin a lion is killing a horse or ass.

Further to the right, under the two soldiers, a man on horseback is fleeing a tiger. It is probably a scene known from literary sources. The man has stolen the cubs of the tiger which follow him to recover the cubs. He has then dropped a ball of glass, the tiger sees its own smaller reflection in the glass, and believing it is one of its cubs, it stops to care for it. In the meantime the man escapes with the cubs. In the mosaic he enters a river boat at full speed, where three seamen are ready to set out. Above the ship a panther is confronting an antelope. 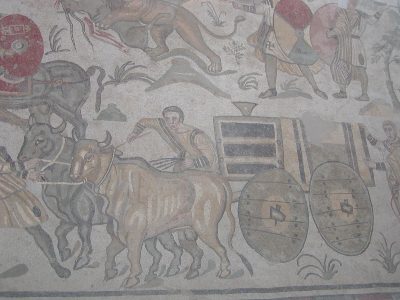 The next scene is one of transportation of the animals by ox-drawn cart. Three men are trying to persuade the oxen to move forward, one by pulling them, another by pushing the card and the last by hitting the oxen with a stick. Two mounted soldiers with large round shields watch them. Behind this there are some hunting scenes. A leopard has jumped on the back of an antelope, and a lion is about to eat another when two soldiers come near. The lion raises its head towards the approaching danger as one of the soldiers is ready to throw his spear as indicated by the other.

In front of the cart and the horsemen stands a group of three persons. The person in front is an older man, bearded, wearing a richly embroidered tunic and cloak, and a small cap. He holds a long staff with a mushroom shaped handle, but is otherwise unarmed. Behind him two soldiers with huge shields see to his protection. 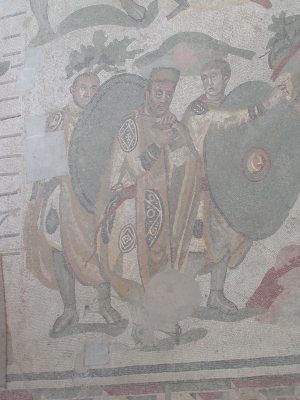 The Roman official in charge

There is no doubt this is a military officer of high rank, and it has been suggested that he is identical to the owner of the villa, but there is no decisive proof for it. It is, however, interesting that there is an ivy leaf on the shoulder of one of the bodyguards, thus connecting the group directly to the villa itself, where ivy leaves are a recurring element of the mosaics.

Above the group is a depiction of a lion hunt gone wrong. The lion is wounded, it has a lance protruding from a shoulder, and it is attacking a soldier that has fallen to the ground. Another soldier is calling for help.

The next scene is a lake or swamp where a group of people are trying to catch a rhinoceros or hippopotamus. Some have entered to lake to tie ropes to the animal, others on shore are pulling the ropes.

Finally the animals are arriving at the port of departure. A group of four men are pulling a buffalo towards the ship, while an elephant is being embarked with the assistance of three other persons. Above this two men are arriving with an antelope, another with a tied tiger and, nearer to the coast, a dromedary and a horned animal.

Immediately on the other side of the ship is depicted the unloading of the animals in Rome. This is a part of the central motif already described. 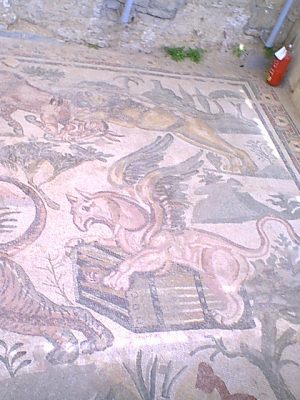 A griffin baited with a human in a cage

The overall theme of the mosaic is not only the hunt for wild animals for the venationes, it is a celebration of the might of the Roman Empire and the domination of civilisation over nature. In the extremes of the corridor are allegories of places known to the romans, but outside the empire. From there towards the centre the animals are caught, transported, shipped and finally unloaded in Rome for the venationes. The mosaic thus depicts a scale of progressively stronger domination of the animals and the wild nature they represent, leading to the ultimate domination when the animals are killed in front of a jubilant crowd in an arena in Rome.

With the exception of the mythic scenes with the griffin and the stealing of the tiger cubs, the rest of the mosaic is very realistic, in terms of animal representation, human representation, hunting techniques and means of transportation.

Noteworthy is the great naturalism in the portrayal of the animals and their behaviour. The dress of the soldiers is also important, as the style clearly places the mosaics in the first half of the fourth century CE.

The mosaic is quite well preserved. Some parts are very damaged, but large parts are practically intact.

There are signs of repairs made in antiquity. In the centre of the composition, repairs have been made over the ship on the right. The later tesserae are larger, and the motif is slightly distorted. There appears to be a piece of the original mast detached from the repaired parts of the mosaic.

Photo gallery for "Corridor of the Great Hunt"

There are 39 photos in this gallery.

Pages related to "Corridor of the Great Hunt"

Pages referring to "Corridor of the Great Hunt"