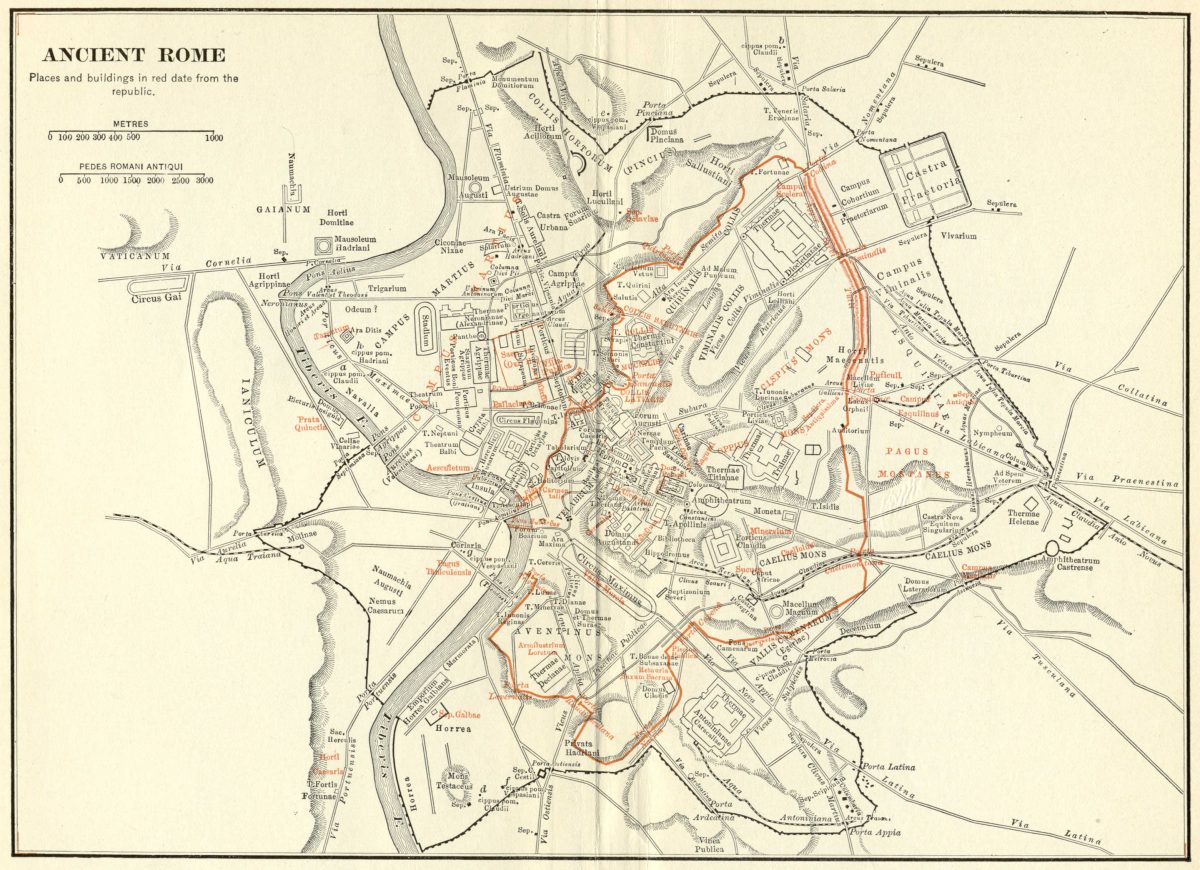 The Seven Hills of Rome

A basic topographical description of the Seven Hills of Rome: the Palatine, Capitoline, Quirinal, Viminal, Esquiline, Caelian and Aventine hills.

Traditionally Rome is said to be founded on seven hills, but the history and the topography of Rome is a bit more complicated than that.

The hills are not all separated, muddling the definitions somewhat. Most of the hills are high ridges, cut by natural streams flowing from the higher ground in to the Tiber River.

Palatine Hill (Palatium)
The central hill and where the city of Rome was founded by Romulus according to legend. The myth is corroborated by archaeological finds from the iron age (10th century BCE) of huts and primitive defensive walls around the hill. The Palatine remained the centre of power throughout the history of Rome, first as the residential area of choice of the most wealthy patricians, later as the residence of the emperors. Significantly, the word palace stems from the name palatinus.
Capitoline Hill (Capitolium)
This hill is very steep and soon became the fortified stronghold of Rome. When the Gauls sacked Rome in 390 BCE, only the Capitol held out. Later it became the religious centre, due to the presence of the Temple of Jupiter Capitolinus Best and Greatest. The Capitoline Hill has two summits, the Capitoline proper to the south and the Arx to the north, with the Asylum on the ridge between them. The Arx is now occupied by the church of Santa Maria in Aracoeli and the modern Vittoriano. The Asylum is now the Piazza di Campidoglio.
Quirinal Hill (Quirinalis)
The Quirinal is the northernmost of four spurs of the high ground east of the Tiber that lay within the limits of Republican Rome. It rose above the Campus Martius and was attached to the Capitoline Hill by a low ridge. The hill is named after the ancient god Quirinus, a member of the earliest Capitoline Triad.
Viminal Hill (Viminalis)
The Viminal is a smaller ridge between the Quirinal Hill and the Esquiline Hill.
Esquiline Hill (Esquiliae)
The Esquiline is one of the largest hills, between the Viminal Hill and the Caelian Hill. Various parts of the the Esquiline Hill have separate names. The Cispian Hill (Cispius) is a small ridge just north of the Esquiline and the western side is called Fagutal (Fagutalis) and the southern side Oppian ((Oppius)). The Esquiline Hill was connected to the Palatine Hill via a ridge called the Velia, which was all but levelled in late antiquity.
Caelian Hill (Caelius)
The Caelian Hill is the southernmost of the four large spurs. It stretches from the area of San Giovanni in Laterano to the Colosseum. It had two high points, referred to as the Larger Caelian, Caelius maior, to the west, and the Smaller Caelian, Caelius minor, to the north.
Aventine Hill (Aventinus)
The Aventine Hill is to the south and the last of the seven hill. It is detached from the other hill, and separated from the Palatine Hill by the valley of the Circus Maximus. The Aventine was traditionally the territory of the plebeians, who had their main temples and sanctuaries there.

Outside the ancient city limits were other hills, that would later be incorporated into the city as it grew.

Pincian Hill (Pincius)
The Pincian Hill is to the north of the Quirinal Hill, overlooking the Campus Martius. The Pincian were mostly gardens, and were referred to as the Collis Hortolorum, the hill of gardens. There is still a park today with a beautiful view over the Piazza del Popolo.

Across the Tiber were other hills:

Janiculum (Janiculum))
The Janiculum is a tall, elongated ridge, oriented mostly north-south. In the earliest time the Janiculum was the northern border of Rome, with Etruscan territory on the other side. In times of war a flag would be planted on the hill to signal to the enemy that Rome was ready. The name is after Janus, the two-faced god.
Vatican Hill (Vaticanus)
The Vatican Hill is a parallel to the Janiculum, further north. It overlooked a flat area to the north, the Vatican Fields, where the Basilica of Saint Peter, the Vatican State and the Castel Sant’Angelo now are.

The Field of Mars (Campus Martius) was a large plain just north of the archaic city, surrounded by the Capitoline, Esquiline and Pincian hills to the east and by the Tiber on the other sides. The army would convene in the Campus Martius before war and military commanders were elected there, as no military activities were allowed with the sacred city limit, the pomerium.

Pages related to "The Seven Hills of Rome"