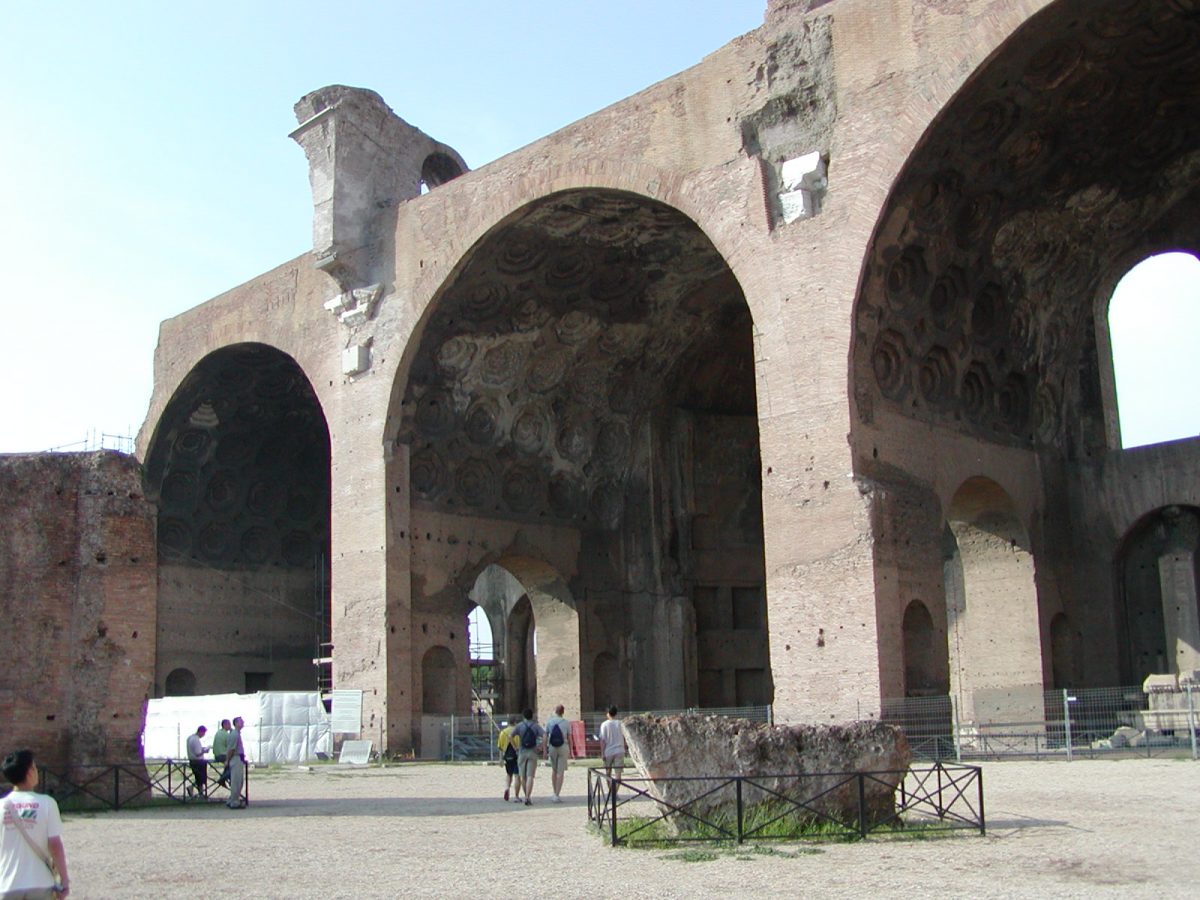 The Basilica of Maxentius in the Forum Romanum

The Basilica of Maxentius is last and largest basilica in the Roman Forum, initiated by Maxentius in 308 CE and finished by Constantine the Great after the battle at the Milvian bridge in 312 CE

The construction of the basilica was initiated by Maxentius in 308 CE, and finished by Constantine after he had defeated Maxentius in the battle of the Milvian Bridge in 312 CE. As other similar buildings, it was destined for commercial and administrative activities. It is likely that the basilica housed the offices of the Prefect of the City, the highest imperial official in late antiquity.

The site chosen for the basilica was on the Velia, a low ridge connecting the Esquiline Hill and the Palatine Hill. Large parts of the Velia was levelled in preparation for the construction of the basilica. Literary sources tell that earlier the site was occupied by the Horrea Piperatica, the central market and storage facility for pepper and spices, built in the time of Domitian. Also on the site was a sanctuary of the penates publici which had to be moved.

The Basilica of Maxentius is built with arches, which is very atypical. All the other public basilicas had flat ceilings supported by wooden beams. The construction techniques used borrowed more from the great imperial baths than from the traditional basilica. 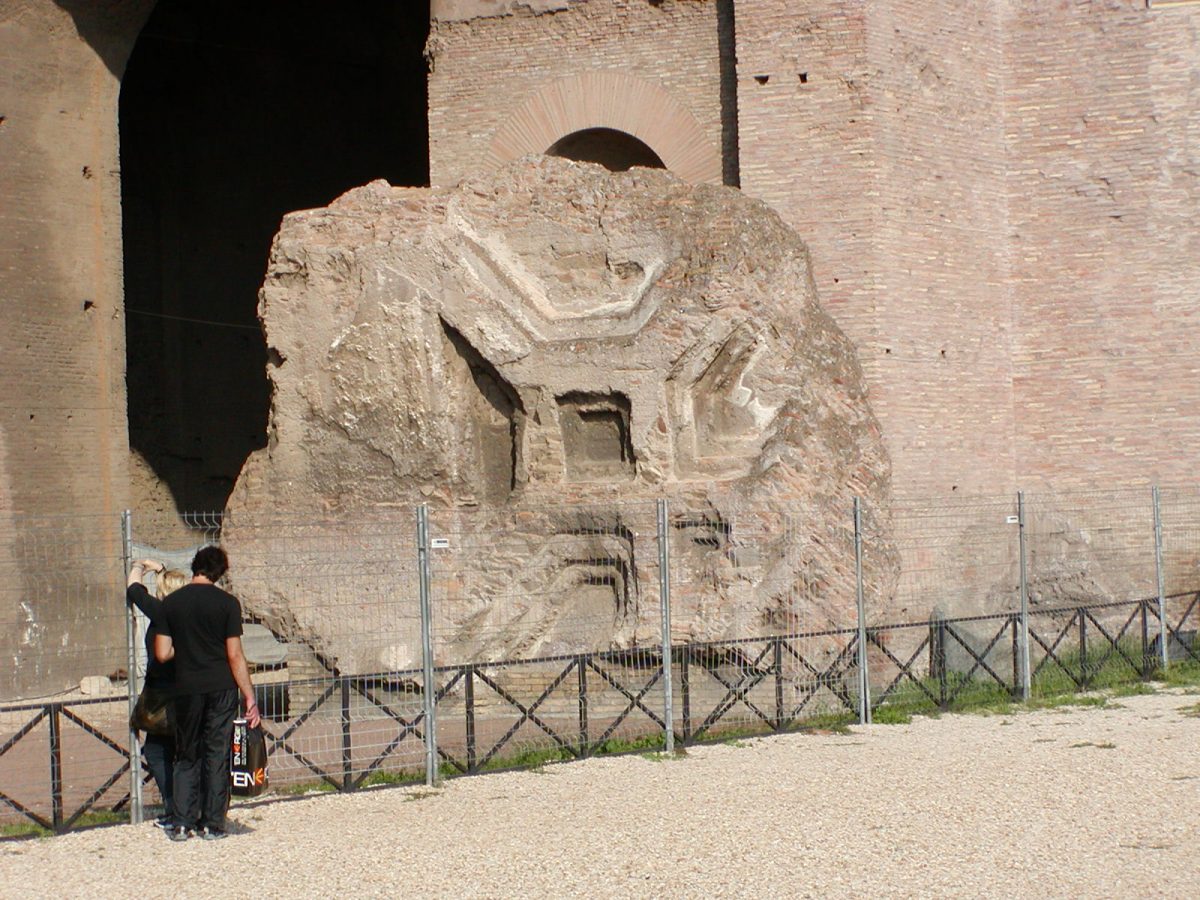 Fragment of a vault from the Basilica of Maxentius

The basilica is one of the most impressive buildings on the Forum Romanum. The ground plan is rectangular, oriented E.-W., covering an area of 100×65m divided into a central nave and to lateral aisles and an atrium on the E. side where the original entrance was.

The central nave measured 80×25m and was covered by three groin vaults with a maximum height of 35m, supported by eight monolithic Corinthian columns of 14.5m. Each of the two aisles was made up of three interconnected coffered vaults, 20.5m wide and 24m high, communicating with the central nave by three huge openings.

Light was provided by two rows of three large windows in five of the six lateral vaults, and by windows in the sides of the now collapsed cross vaults over the central nave. The windows in two of the vaults in the surviving N. side of the building give a good idea of the amount of light inside the building.

The floor in both the central and the lateral spaces were a geometric pattern of squares with circles and lozenges of multi-coloured marble, similar to the floor in the Pantheon.

The walls were in opus latericium, originally with a marble veneer. The vaults were in opus caementicium with a gilded stucco finish. The roof was covered with gilded bronze tiles. 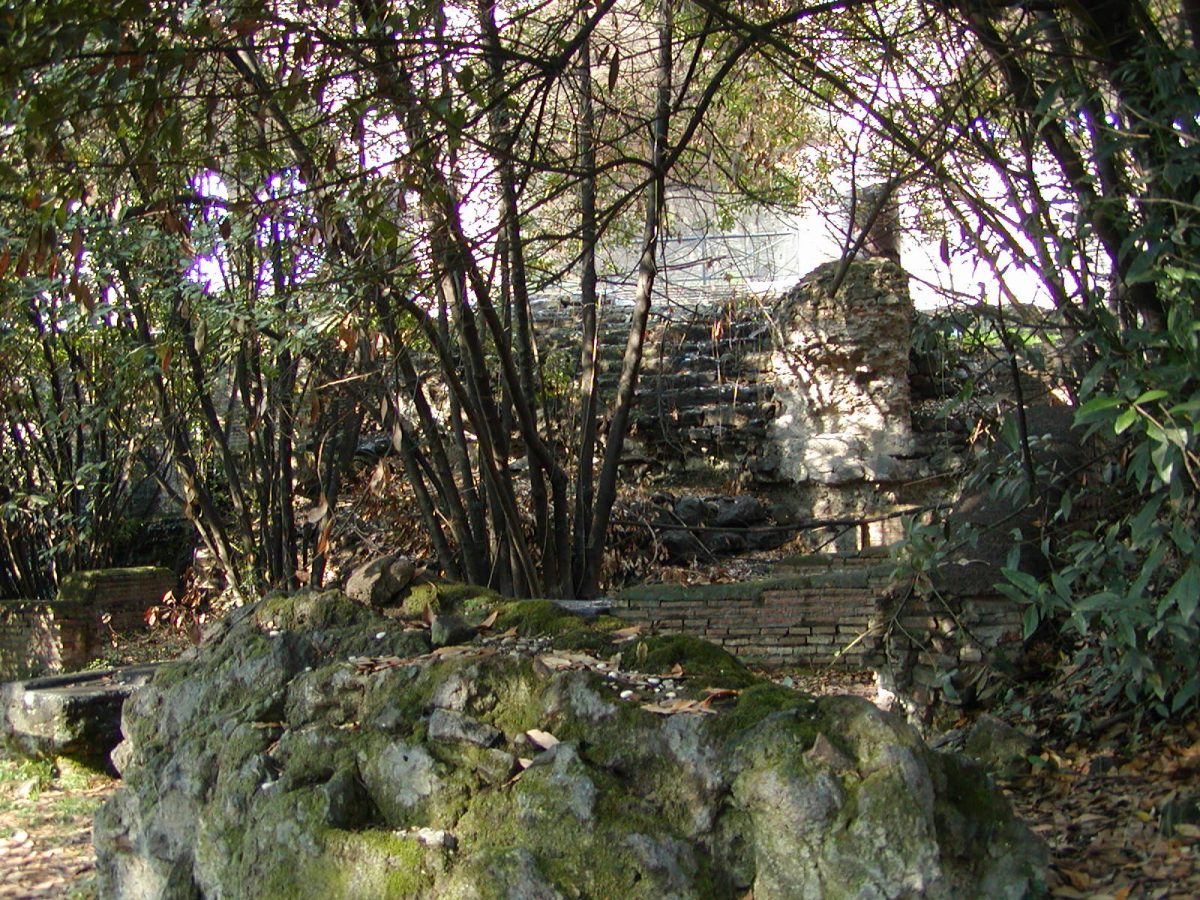 The overgrown ruins of the Basilica of Maxentius

The entrance of the original project of Maxentius was to the east, from a branch of the old Via Sacra behind the Temple of Amor and Roma. It lead into an elongated atrium, connected to the central nave and the lateral aisles by five gateways.

In the W. end was a huge apse, 20m in diameter, where a colossal seated statue of Maxentius stood. This statue was later changed to look like Constantine. The statue was an acrolith (the head, hands and feet were of marble, while the rest was of other materials), and the remains of the statue were found in 1486 in the apse.

Constantine changed the plan when he took over the unfinished basilica. He had a another entrance added on the S. side, on the Via Sacra, where a monumental stairway led to a porch of four porphyry columns and via three double doorways into the central part of the S. aisle. In front of this new entrance, in the central vault of the N. aisle, another apse was added, smaller than the apse in the W. end. In back of this apse a niche held a standing statue of Constantine, and smaller, square-headed niches, two rows of four niches on each side, which might have housed a gallery of Constantine’s relatives and lieutenants. This room could be closed by wooden doors, and it is likely the central part of the office of the Prefect of the City was there.

Of the original building only the three vaults of the N. aisle remain, devoid of all decorations. The vaults of the S. and central nave probably collapsed under an earthquake in c. 847. The floor plan is clearly visible, however, and the remaining structures give a vivid impression of the grandeur of the original edifice.

The remains of the Colossal Statue of Constantine I are in the courtyard of the Palazzo dei Conservatori on the Campidoglio, and one of the columns from the central nave was moved to the Piazza Santa Maria Maggiore in 1614. The remaining columns have disappeared. The bronze tiles from the roof were reused for the first Basilica of Saint Peter.

The Basilica can be visited from the side of the Forum Romanum.

Photo gallery for "Basilica of Maxentius"

There are 20 photos in this gallery.

Pages related to "Basilica of Maxentius"

Pages referring to "Basilica of Maxentius"