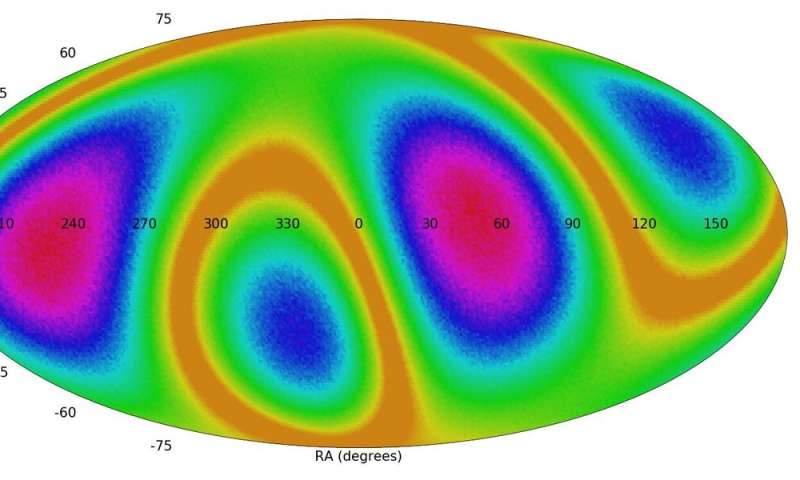 An all-sky mollweide map of the quadrupole in the distribution of galaxy spin directions. In this image, the different colors mean different statistical strength of having a cosmological quadrupole at different points in the sky. Credit: Kansas State University

An analysis of more than 200,000 spiral galaxies has revealed unexpected links between spin directions of galaxies, and the structure formed by these links might suggest that the early universe could have been spinning, according to a Kansas State University study.

Lior Shamir, a K-State computational astronomer and computer scientist, presented the findings at the 236th American Astronomical Society meeting in June 2020. The findings are significant because the observations conflict with some previous assumptions about the large-scale structure of the universe.

Since the time of Edwin Hubble, astronomers have believed that the universe is inflating with no particular direction and that the galaxies in it are distributed with no particular cosmological structure. But Shamir's recent observations of geometrical patterns of more than 200,000 spiral galaxies suggest that the universe could have a defined structure and that the early universe could have been spinning. Patterns in the distribution of these galaxies suggest that spiral galaxies in different parts of the universe, separated by both space and time, are related through the directions toward which they spin, according to the study.

"Data science in astronomy has not just made astronomy research more cost-effective, but it also allows us to observe the universe in a completely different way," said Shamir, also a K-State associate professor of computer science. "The geometrical pattern exhibited by the distribution of the spiral galaxies is clear, but can only be observed when analyzing a very large number of astronomical objects."

A spiral galaxy is a unique astronomical object because its visual appearance depends on the observer's perspective. For instance, a spiral galaxy that spins clockwise when observed from Earth, would seem to spin counterclockwise when the observer is located in the opposite side of that galaxy. If the universe is isotropic and has no particular structure—as previous astronomers have predicted—the number of galaxies that spin clockwise would be roughly equal to the number of galaxies that spin counterclockwise. Shamir used data from modern telescopes to show that this is not the case.

With traditional telescopes, counting galaxies in the universe is a daunting task. But modern robotic telescopes such as the Sloan Digital Sky Survey, or SDSS, and the Panoramic Survey Telescope and Rapid Response System, or Pan-STARRS, are able to image many millions of galaxies automatically as they survey the sky. Machine vision can then sort millions of galaxies by their spin direction far faster than any person or group of people.

The patterns span over more than 4 billion light-years, but the asymmetry in that range is not uniform. The study found that the asymmetry gets higher when the galaxies are more distant from Earth, which shows that the early universe was more consistent and less chaotic than the current universe.

But the patterns do not just show that the universe is not symmetric, but also that the asymmetry changes in different parts of the universe, and the differences exhibit a unique pattern of multipoles.

"If the universe has an axis, it is not a simple single axis like a merry-go-round," Shamir said. "It is a complex alignment of multiple axes that also have a certain drift."

The concept of cosmological multipoles is not new. Previous space-based observatories—such as the Cosmic Background Explorer, or COBE, satellite; the Wilkinson Microwave Anisotropy Probe, or WMAP mission; and the Planck observatory—showed that the cosmic microwave background, which is electromagnetic radiation from the very early universe, also exhibits multiple poles. But the measurement of the cosmic microwave background is sensitive to foreground contamination—such as the obstruction of the Milky Way—and cannot show how these poles changed over time. The asymmetry between spin directions of spiral galaxies is a measurement that is not sensitive to obstruction. What can obstruct galaxies spinning in one direction in a certain field will necessarily also obstruct galaxies spinning in the opposite way.

"There is no error or contamination that could exhibit itself through such unique, complex and consistent patterns," Shamir said. "We have two different sky surveys showing the exact same patterns, even when the galaxies are completely different. There is no error that can lead to that. This is the universe that we live in. This is our home."

Image: Hubble spots a curious spiral Provided by Kansas State University Citation: Study finds that patterns formed by spiral galaxies show that the universe may have a defined structure (2020, June 1) retrieved 14 July 2020 from https://phys.org/news/2020-06-patterns-spiral-galaxies-universe.html This document is subject to copyright. Apart from any fair dealing for the purpose of private study or research, no part may be reproduced without the written permission. The content is provided for information purposes only.

Structure of the molecular cloud Orion A investigated in detail

Best evidence yet for existence of anyons

Synthesizing an alternative fuel for muscle could lead to medical advances

Green is more than skin-deep for hundreds of frog species

Expansion of the Universe and the fourth dimension

Would lightning be possible on brown dwarfs?

Our Beautiful Universe - Photos and Videos

The orbit of comet Neowise

Is Triton ever hidden behind Neptune?

More from Astronomy and Astrophysics