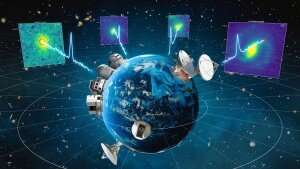 An international team of astronomers led by Shivani Bhandari, an astronomer with CSIRO, Australia’s national science agency, has made a key breakthrough by zooming in on the precise location of four fast radio bursts and having a look around their ‘neighborhoods.’ Credit: W. M. Keck Observatory

Astronomers have peered into the home galaxies of fast radio bursts, ruling out supermassive black holes as a cause and bringing us a step closer to understanding the origins of these mysterious signals from outer space.

Fast radio bursts—the hottest topic in astronomy right now—were first detected in 2007, but astronomers are still working out what could make such a brief signal appear so bright. In just a millisecond, a single burst releases more energy than our Sun emits in 80 years.

An international team of astronomers led by Shivani Bhandari, an astronomer with CSIRO, Australia's national science agency, has made a key breakthrough by zooming in on the precise location of four fast radio bursts and having a look around their 'neighborhoods.'

The research, which includes data from W. M. Keck Observatory on Maunakea in Hawaii, published today in The Astrophysical Journal Letters.

"Just as video calls with colleagues show you their homes and give you a bit of an insight into their lives, looking into the host galaxies of fast radio bursts give us insights to their origins."

"These precisely localized fast radio bursts came from the outskirts of their home galaxies, removing the possibility that they have anything to do with supermassive black holes," Bhandari said.

This first detailed study of the galaxies that host fast radio bursts rules out several of the more extreme theories put forward to explain their origins, getting us closer to knowing their true nature.

Co-author CSIRO's Professor Elaine Sadler said these fast radio bursts could not have come from a super luminous stellar explosion or from cosmic strings.

"Models such as mergers of compact objects like white dwarfs or neutron stars, or flares from magnetars created by such mergers, are still looking good," said Sadler.

Investigating if fast radio bursts favor a certain type of galaxy, the team found all four bursts came from massive galaxies that are forming new stars at a modest rate, very similar to our own Milky Way galaxy.

J. Xavier Prochaska of the University of California, Santa Cruz co-led the team responsible for the optical observations.

"Major advances for other transient events have been made by studying their home galaxies. We are optimistic that studies like ours will be just as vital," Prochaska said.

Dame Jocelyn Bell Burnell, who as a postgraduate student in 1967 was the first to detect rapidly spinning neutron stars now known as 'pulsars,' praised the research.

"Positioning the sources of fast radio bursts is a huge technical achievement and moves the field on enormously," Bell Burnell said. "We may not yet be clear exactly what is going on, but now, at last, options are being ruled out. This is a highly significant paper, thoroughly researched and well written."

Cosmic bursts unveil universe's missing matter More information: Shivani Bhandari et al. The Host Galaxies and Progenitors of Fast Radio Bursts Localized with the Australian Square Kilometre Array Pathfinder, The Astrophysical Journal (2020). DOI: 10.3847/2041-8213/ab672e Journal information: Astrophysical Journal , Astrophysical Journal Letters Provided by W. M. Keck Observatory Citation: Zooming in on the origins of fast radio bursts (2020, June 2) retrieved 14 July 2020 from https://phys.org/news/2020-06-fast-radio.html This document is subject to copyright. Apart from any fair dealing for the purpose of private study or research, no part may be reproduced without the written permission. The content is provided for information purposes only.

Structure of the molecular cloud Orion A investigated in detail

Best evidence yet for existence of anyons

Finding the missing step of an important molecular process

Synthesizing an alternative fuel for muscle could lead to medical advances

Expansion of the Universe and the fourth dimension

Would lightning be possible on brown dwarfs?

Our Beautiful Universe - Photos and Videos

The orbit of comet Neowise

Is Triton ever hidden behind Neptune?

More from Astronomy and Astrophysics