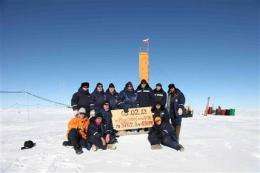 In this Monday, Feb. 5, 2012 photo provided by Arctic and Antarctic Research Insitute of St. Petersburg, Russian researchers at the Vostok station in Antarctica pose for a picture after reaching subglacial lake Vostok. Scientists hold the sign reading "05.02.12, Vostok station, boreshaft 5gr, lake at depth 3769.3 metres." The Russian team reached the lake hidden under miles of Antarctic ice on Sunday, a major scientific discovery that could provide clues for search for life on other planets. (AP Photo/Arctic and Antarctic Research Institute Press Service, )

After more than two decades of drilling in Antarctica, Russian scientists have reached a gigantic freshwater lake hidden under miles of ice for some 20 million years - a pristine body of water that may hold life from the distant past and clues to the search for life on other planets.

Finally touching the surface of Lake Vostok, the largest of nearly 400 subglacial lakes in Antarctica, is a major discovery avidly anticipated by scientists around the world.

Valery Lukin, the head of Russia's Arctic and Antarctic Research Institute (AARI) who oversaw the mission and announced its success, likened the endeavor to the epic race to the moon won by American scientists over the Soviets in 1969.

"I think it's fair to compare this project to flying to the moon," he said Wednesday.

Scientists hope the lake may allow a glimpse into microbial life forms that existed before the Ice Age and are not visible to the naked eye. Scientists believe that microbial life may exist in the dark depths of the lake despite its high pressure and constant cold - conditions similar to those expected to be found under the ice crust on Mars, Jupiter's moon Europa and Saturn's moon Enceladus.

"In the simplest sense, it can transform the way we think about life," NASA's chief scientist Waleed Abdalati told The Associated Press in a email.

American and British teams are drilling to reach their own subglacial Antarctic lakes, but Columbia University glaciologist Robin Bell said those lakes are smaller and younger than Vostok, which is the big scientific prize.

"It's like exploring another planet, except this one is ours," she said.

Lake Vostok is 160 miles (250 kilometers) long and 30 miles (50 km) across at its widest point, similar in area to Lake Ontario. It's kept from freezing into a solid block by the mammoth crust of ice across it that acts like a blanket, keeping in heat generated by geothermal energy underneath.

The technological challenges of drilling through the ice crust in the world's coldest environment have made the project unique.

Temperatures on the Vostok Station on the surface above have registered the coldest ever recorded on Earth, reaching minus 89 degrees Celsius (minus 128 degrees Fahrenheit), and conditions were made even tougher by its high elevation, more than 11,000 feet (3,300 meters) above sea level, resulting in thin oxygen.

The effort, however, has drawn strong fears that 60 metric tons (66 tons) of lubricants and antifreeze used in the drilling may contaminate the pristine lake. Bell said the Russian team was doing its best "to try really hard to do it right" and avoid contamination, but some others were nervous.

University of Colorado geological sciences professor James White was among those who urged caution about drilling into subglacial lakes.

"Lake Vostok is the crown jewel of lakes there," White said by telephone. "These are the last frontiers on the planet we are exploring, we really ought to be very careful."

Lukin said Russia had waited for several years for international approval of its drilling technology before proceeding to reach the lake. He said about 1.5 cubic meters (50 cubic feet) of kerosene and freon poured up to the surface tanks from the boreshaft, proof that the lake water streamed up from underneath, froze and then blocked the hole, sealing off the chance that any toxic chemicals could contaminate.

Russian scientists will later remove the frozen sample for analysis in December when the next Antarctic summer season comes. They reached the lake just before they had to leave at the end of the Antarctic summer, as plunging temperatures halted air links.

Some scientists hope that studies of Lake Vostok and other subglacial lakes will advance knowledge of Earth's own climate and help predict its changes.

"It is an important milestone that has been completed and a major achievement for the Russians because they've been working on this for years," said Professor Martin Siegert, a leading scientist with the British Antarctic Survey, which is trying to reach another Antarctic subglacial lake, Lake Ellsworth.

"The Russian team share our mission to understand subglacial lake environments and we look forward to developing collaborations with their scientists and also those from the U.S. and other nations, as we all embark on a quest to comprehend these pristine, extreme environments," he said in an email.

Americans scientists are drilling at Lake Whillans, west of the South Pole.

In the future, Russian researchers plan to explore the lake using an underwater robot equipped with video cameras that would collect water samples and sediments from the bottom of the lake, a project still awaiting the approval of the Antarctic Treaty organization.

The prospect of lakes hidden under Antarctic ice was first put forward by Russian scientist and anarchist revolutionary, Prince Pyotr Kropotkin, at the end of the 19th century. Russian geographer Andrei Kapitsa noted the likely location of the lake and named it following Soviet Antarctic missions in the 1950s and 1960s, but it wasn't until 1994 that its existence was proven by Russian and British scientists.

The drilling in the area began in 1989 and dragged on slowly due to funding shortages, equipment breakdowns, environmental concerns and severe cold.

The lake's pristine water may make entrepreneurs sweat just thinking of its commercial potential, but Lukin shot that idea right down.

He said his team had no intention of selling any Vostok water samples but would eventually share the results of their work with scientists from other nations.

©2012 The Associated Press. All rights reserved. This material may not be published, broadcast, rewritten or redistributed.

Citation: In scientific coup, Russians reach Antarctic lake (2012, February 8) retrieved 8 July 2020 from https://phys.org/news/2012-02-scientific-coup-russians-antarctic-lake.html This document is subject to copyright. Apart from any fair dealing for the purpose of private study or research, no part may be reproduced without the written permission. The content is provided for information purposes only.

Histone H3-H4 tetramer found to be a copper reductase enzyme

Animals who try to sound 'bigger' are good at learning sounds

How long to play dead in order to stay alive?

NASA's InSight flexes its arm while its 'mole' hits pause

What is the reason that the Gravitational Constant (G) varies?