All About Sea Ice 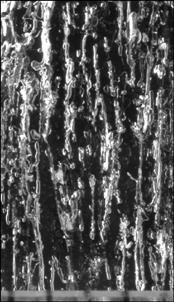 A photograph in natural light showing elongated tubes that form as brine pockets trapped between the ice crystals. The image is 5 millimeters in width.
—Photo courtesy of Ted Maksym, United States Naval Academy.

Salinity is a measure of the concentration of dissolved salts in water. Until recently, a common way to define salinity values has been parts per thousand (ppt), or kilograms of salt in 1,000 kilograms of water. Today, salinity is usually described in practical salinity units (psu), a more accurate but more complex definition. Nonetheless, values of salinity in ppt and psu are nearly equivalent. The average salinity of the ocean typically varies from 32 to 37 psu, but in polar regions, it may be less than 30 psu. Sodium chloride (table salt) is the most abundant of the many salts found in the ocean.

Salt plays an important role in ocean circulation. In cold, polar regions, changes in salinity affect ocean density more than changes in temperature. When salt is ejected into the ocean as sea ice forms, the water's salinity increases. Because salt water is heavier, the density of the water increases and the water sinks. The exchange of salt between sea ice and the ocean influences ocean circulation across hundreds of kilometers. For more information, see Global Climate in the Environment section.

Learn About Snow and Ice