Wikipedia and the other Wikimedia projects are run from several racks full of servers. See also Wikimedia Foundation's technical blog and blog posts by Phabricator users.

The Network topology is described in "Network design" at Wikitech. 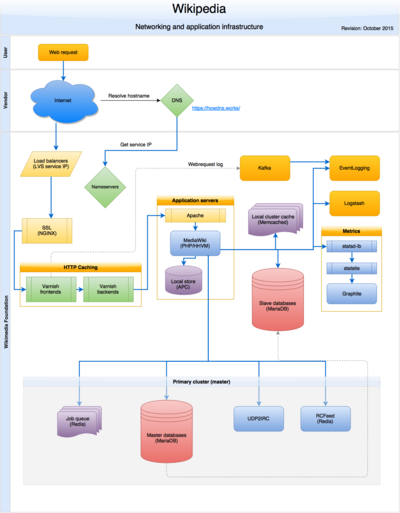 Simplified overview of the employed software as of October 2015. (A very complex LAMP "stack") 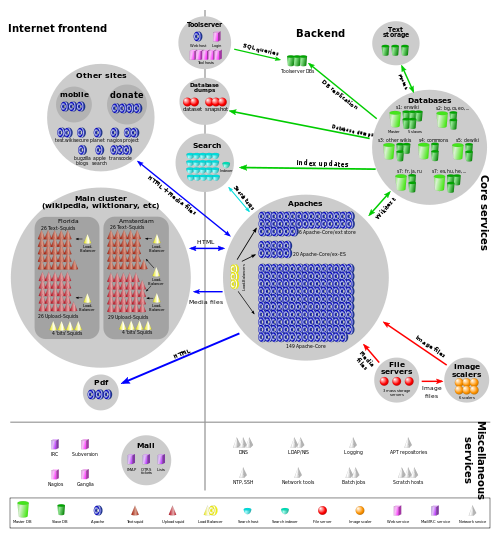 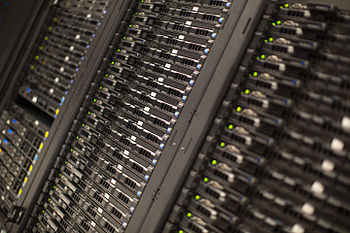 As of May 2018, we have the following colocation facilities (each name is derived from an acronym of the facility’s company and an acronym of a nearby airport):

The backend web and database servers are in Ashburn, with Carrollton to handle emergency fallback in the future. Carrollton was chosen for this as a result of the 2013 Datacenter RfC. At EvoSwitch, we have a Varnish cache cluster and several miscellaneous servers. The Kennisnet location is now used only for network access and routing.

Ashburn (eqiad) became the primary data center in January 2013, taking over from Tampa (pmtpa and sdtpa) which had been the main data centre since 2004. Around April 2014, sdtpa (Equinix – formerly Switch and Data – in Tampa, Florida, provided networking for pmtpa) was shut down, followed by pmtpa (Hostway – formerly PowerMedium – in Tampa, Florida) in October 2014.

In the past we've had other caching locations like Seoul (yaseo, Yahoo!) and Paris (lopar, Lost Oasis); the WMF 2010–2015 strategic plan reach target states: "additional caching centers in key locations to manage increased traffic from Latin America, Asia and the Middle East, as well as to ensure reasonable and consistent load times no matter where a reader is located."

EvoSwitch and Kennisnet are recognised as benefactors for their in-kind donations. See the current list of benefactors.

A list of servers and their functions used to be available at the server roles page; no such list is currently maintained publicly (perhaps the private racktables tool has one). It used to be possible to see a compact table of all servers grouped by type on icinga, but this is no longer publicly available. The puppet configuration provides a pretty good reference for software what each server runs however.

You can check one of the following sites if you want to know if the Wikimedia servers are overloaded, or if you just want to see how they are doing.

If you are seeing errors in real time, visit #wikimedia-techconnect on irc.freenode.net. Check the topic to see if someone is already looking into the problem you are having. If not, please report your problem to the channel. It would be helpful if you could report specific symptoms, including the exact text of any error messages, what you were doing right before the error, and what server(s) are generating the error, if you can tell.

The Sustainability Initiative aims at reducing the environmental impact of the servers by calling for renewable energy to power them.

The Wikimedia Foundation's servers are spread out in five colocation data centers in Virginia, Texas and San Francisco in the United States, Amsterdam in Europe, and Singapore in Asia. As of May 2016, the servers use 222 kW, summing up to about 2 GWh of electrical energy per year. For comparison: An average household in the United States uses 11 MWh/year, the average for Germany is 3 MWh/year.

Only the few servers in Amsterdam run on renewable energy, the other use different conventional energy mixes. Overall, just 9% of Wikimedia Foundation data centers' energy comes from renewable sources, with the rest split evenly between coal, gas and nuclear power (34%, 28%, and 28%, respectively). The bulk of the Wikimedia Foundation's electricity demand is in Virginia and Texas, which unfortunately have both very fossil fuel heavy grids.

In 2015, Equinix made "a long-term commitment to use 100 percent clean and renewable energy". In 2017, Equinix renewed this pledge. codfw Carrollton, TX

Information about other web sites[edit]