Links to related websites and blogs 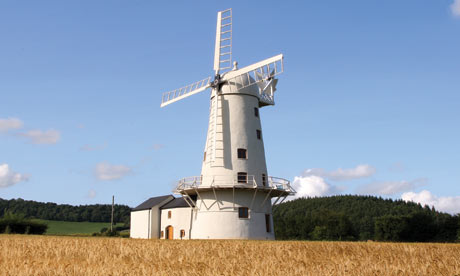 Llancayo Windmill cottage near Usk, photo via the Guardian Newspaper.
We are today all increasingly aware that India has become a world leader in wind farm technology, already with about 20 GW of installed wind power.  Companies like Suzlon from Pune, are believed to be the 5th largest global manufacturer of turbines, making them both for sale in India as well as for export to many countries around the world.

Since 1997 Suzlon has been able to develop very rapidly by benefiting from Globalisation and from the transfer of technologies developed in Belgium and Germany.
What I had not expected to find was that this was certainly not the first time that an attempt had been made to transfer wind power technology to India.

Quite by chance while researching through the records of that pioneer of globalisation the East India Company, I recently stumbled across a fascinating series of records that suggest that a windmill was built as early as 1730 at Horse Tail Point, Cuddalore.

India does not appear to have had a tradition of using wind power, unlike Europe which had developed windmills for uses including pumping water, and grinding agricultural grains over a period of nearly a thousand years.
Because the East India Company was a primarily a trading house, with shareholders, its servants had to maintain meticulous records.  Each settlement had weekly and monthly business meetings called Consultations, at which the settlement board or management team recorded the accounts and most significant events that had taken place during the previous week or month.

These records record in great detail many of the events in the life of these settlements, and often offer really fascinating insights into the life of our ancestors. While looking for the expenses claims submitted by one of my great x 5 grandfather, who was a Captain in the garrison at Fort St David at that time, I first chanced upon  the following…

“Windmill Rent Paid.  Poncala Kristna and Vadashavaroro Bound Renters pay in Forty Pagodas for three months Rent of the Windmill to Ulto September.”      [1]
Many of the goods sold inside the settlement at Cuddalore were the subject of monopolies held by the East India Company, and these included the Farm of the Arrack, as well as selling of tobacco, salt, beetle and even running the ferry that existed between Cuddalore and the Fort itself.

Rather than run them themselves the Officials would from time to time let tenders for the right to operate these monopolies.

This was called Farming, and was a long established process common in England during the 17th Century where entrepreneurs were invited to tender to the state for things like the right to collect the taxation of regions in Britain. The state would estimate the nominal taxation value of an area.  The collection of this amount was rarely achieved in practise, and so the tenderers would bid for a lesser amount that they believed they could actually extract, less their expenses for collection.  Key to success was setting this figure lower than the amount they really expected to be able to actually collect. The “Farmer” took on the risk of collecting the discounted sum, and was liable to the state for any shortfall from this discounted amount. Poncala Kristna and Vadashavaroro who were active at this period in Cuddalore bidding for several of these concessions were also hiring the wind mill.

The records go on to state that the renters were struggling to make the windmill pay, and that they were unwilling to pay as much for it in future.  The Board of Management had become concerned because they believed that Poncala Kristna and Vadashavaroro were using their influence to prevent other local businessmen from bidding against them. In the event this does not appear to have been successful, as somebody called “Tarheriffe” is recorded as being the successful bidder, and not just for the wind mill concession.


"May 13 [1731] The Tobacco and Beetle Bounds & Windmill Farms Lett out for 5 years and the Renter Tarheriffe."


I have not had opportunity to go through the earlier records to see if I can find out the origin of this wind mill.  However there is an account of monies paid to Mr Newcombe in the summer of 1730 for the construction of the wind mill.

This account tells us quite a bit about the wind mill.

First the location.  It was at Horse Tail Point.  I cannot locate Horse Tail Point on the oldest map I have a copy of dating from 1781, but it is very probable that this Point is the spit of land to the seaward side of the Fort that runs out into the sea part of the way across the river separating the Fort from the town. 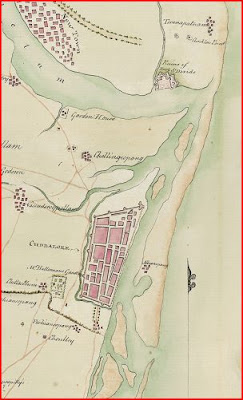 The map shows several long spits that could be though to resemble a Horse Tail Point. At the northern end of the Humber Estuary lies a similar spit of land called Spurn Point.  Point is used around the English coast to name a long thin piece of land extending out to sea. One of these was probably the site of the wind mill.
Frustratingly, there is no indication of what the wind mill ground up, however if the location is as I have suggested, it is probable that the material being ground was grain for the use of the  garrison.

If it had been intended to grind crops for the Indian population, one would presume that it would have been constructed in a more readily accessed location for Indian’s, nearer the town.

There is one puzzling omission in the accounts.  Where is the supply of wood?

There is also another curious item in the accounts, for which I could not at first account.

Why did they require 450 seer of Jaggary?

I believe Jaggary is a compound made from refining sugar cane juices.

Am I correct here?

Could you make plaster or cement with Chunam and sugar?

As so often Google Books provides the answer.  In 1836 the Madras Journal of Literature and Science, contained a long article on Chunam and the use of Jaggery, part of which is shown below. 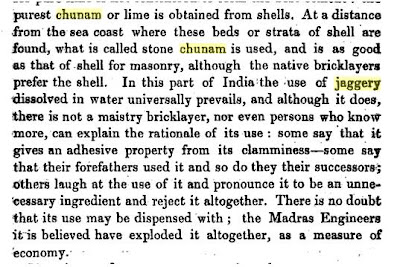 The article goes on to explain goes on to describe experiments undertaken by Madras Engineers with Jaggary in Chunam.  They found that the bricks and lime mortar used routinely in India were porous.  If however by using Jaggary  mixed into the plaster, it was found that it was absorbed into the surface of the brickwork where it set and then sealed up the pores in the bricks rendering the brick work waterproof.

Its use on a windmill, and especially one built near the sea makes a great deal of sense, as it is essential that the feedstock being ground and especially the processed flour in the mill remains dry.

The sail cloth is easily accounted for. It would have been used to cover the windmills sails.

The cloth was made in strips which were spread over the wooden frames that were called sails. The speed of the sails could be regulated to the wind speeds by rolling back the cloth to reduce its effective wind catching area, and adjusting the sail area down as the wind speed increased.

I would really welcome input from Indian’s here? Is there any Indian foodstuff that needs grinding in large bulk quantities on a regular basis?

Surely spices were so valuable, and generally needed grinding in such small daily quantities that it was done by hand grinding with stones driven by woman power.  This would probably sufficed for all the general needs of 1730’s Cuddalore inhabitants.

Perhaps it was the lack of real demand for milling that limited the amount of rent that was affordable.

The lack of wood in the account is more puzzling, however there may be a very simple answer to this.

Wind mills in Europe come in two main types.  Post mills that are generally built in wood, even if they have a brick built lower base. 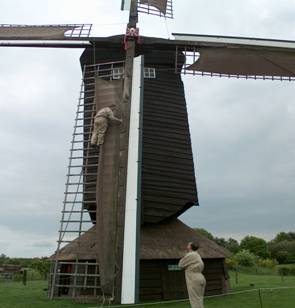 A typical post mill. This type built predominantly of wood, generally predates tower mills.
Note how the millers are spreading sail cloth onto the frame.
The other form, a tower mill, had a far higher brick built tower, with only a limited cap that contained the mechanism. 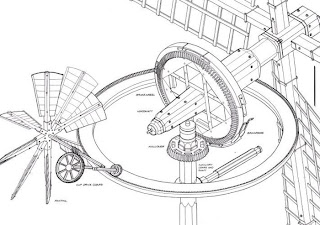 A drawing showing the gears inside a Tower Mill.

The very large number of bricks purchased point to the mill having been a very substantial brick built building.

To build a brick wall with two rows of brick besides each other 225mm thick, which would be the usual thickness for a house wall, uses 120 bricks per m2 of wall.

However the stresses inherent in a wind mill would be much greater than those in a house, so that the wall was probably built substantially thicker than a house wall would have been.

We have no idea of the mills actual diameter, but these mills in England are often 30 feet or more in diameter at the base, with a tapering tower.

I have used standard English brick sizes, and it is possible that these bricks were made to Indian customary sizes, which tend to be less deep. Does any know what a standard 18th Century brick measured?

[3]
A cross Section through a typical Tower Mill.
This seems to give an unnecessarily high tower.  Perhaps more than just a tower was built.  It is quite possible that both a wind mill tower and some sort of house and barn for the wind mill operator was constructed.  This would have allowed for the storage of grain before it was processed, and for flour once it had been ground up.  The wind mill needed to me managed around the clock so that the winds were caught, and they were no respecters of office hours.  The miller had to be on site to regulate the sails as the wind changed speed or direction.

The sheer quantity of bricks in the account suggests very strongly that the wind mill was a tower mill and not a post or smock mill.

The lack of wood could be simply because somebody else put in an account for the wooden bits and this has not survived.

However, I believe that the lack of any wood in the account points towards the East India Company having had the inner workings of the wind mill made in England in prefabricated sections, and then had the bits shipped out to Cuddalore perhaps together  with Mr. Newcombe who was probably an experienced millwright.

With its external walls coated in gleaming white plaster, the mill must have looked much like Llancavo Windmill near Usk.  That windmill has both a millers cottage and attached barn, and must look much like the one at Cuddalore.

At present I have no idea what became of it.  Many abandoned brick built towers dot the English countryside as they are very durable structures even when abandoned. I wonder if the footings or remains of this building are not somewhere along the current shoreline at Cuddalore today?

Does anybody know if any other wind mills were built in India?